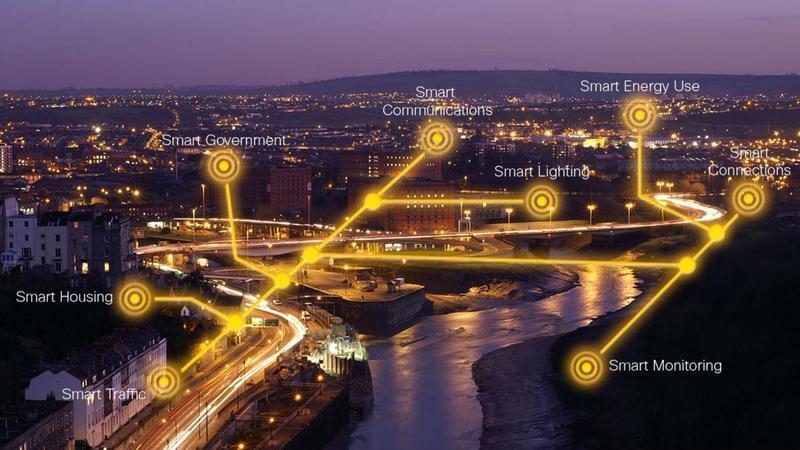 Public administration officials and technology leaders have been advocating for the concept of smart cities — which use technology such as IoT, AI and 5G for cost-efficient service delivery — as an answer to issues raised by Africa’s burgeoning population and increasing urbanization.

Projects to build smart cities from the ground up take years to complete however, and some experts have been advocating for a more modular approach, calling for the incorporation of emerging technology into existing urban infrastructure.

What are smart cities?

Smart cities integrate components such as sensors with IoT networks and information and operational technology to monitor and control infrastructure, devices and the flow of data, with the overall goal of improving the standard of living for residents. Superfast 5G is used to connect components wirelessly, and AI applications are often used to monitor and control networks, and do predictive maintenance.

Big greenfield projects such as Konza Technopolis, in Kenya, and Lanseria Smart City, in South Africa, are moving ahead. As emerging technology is being deployed throughout Africa and becoming more readily available, though, there is a growing debate about whether more focus should be placed on modernising existing communities.

Greenfield smart city projects require massive investments. Konza Technopolis, for example, is estimated to have nearly US$1 billion in building costs for the government, and carry a total price tag of $14.5 billion including investments from third parties. The project, a 5,000-acre development 64 km south of Nairobi adjacent to Konza City, is still on course, and includes the Tier III Konza National Data Center.

The main aim of Konza Technopolis is to generate local innovation and attract international, innovative companies to develop solutions for Kenya. Konza has already forged agreements with foreign technology companies and research institutions to establish themselves at the technopolis.

In its completion, Konza Technopolis will offer data-driven services. For example, roadway sensors will be able to monitor pedestrian and automobile traffic and adjust traffic-light timing accordingly to optimize traffic flows and issue emergency warnings. Energy and water consumption will be closely monitored.

“Even in advanced economies, in terms of creating a new economic drive, at times you have to go to a greenfield approach,” he said, giving the example of Research Triangle Patk in North Carolina, U.S., which was established as a research community.

A range of urban planners and technology leaders, however, are suggesting different approaches for Africa.

World Mobile’s  applications and services are targeted at the nearly 4 billion people globally who are still unconnected to communications networks.

The company has created what it calls “smart villages” that have helped businesses grow while enhancing the lives of people.

Its project in Tanzania has connected universities, schools, and remote villages, providing them with connectivity and power, said Micky Watkins, CEO of World Mobile. Its business model builds on existing infrastructure and does not aim to interrupt the lifestyle of local residents.

“Africa has the opportunity to leapfrog the rest of the world into the 4th industrial revolution,” Watkins said, referring to the concept of a convergence of emerging technologies expected to supercharge economic growth. “Africa cannot and should not wait for 5G to build smart cities. There are already enough unlicensed spectrums for IoT to make communications more affordable and efficient.”

Hugues Parant, the CEO of the Euroméditerranée urban development agency, offers a similar view on how Africa can build smart cities, based on his own experience. The agency is working to make Aix-Marseille-Provence — a group of cities and towns in France — a smart, connected and sustainable community. It is one of the biggest urban development projects in Europe.

“To answer the gigantic urban development needs, many African countries have decided to literally build brand new cities, sometimes 50 kilometres from capitals,” Parant said.  However, this has only magnified the issues that the old infrastructures face, he said.

“A city will be smart if it can adapt to all types of populations instead of excluding some,” Parant  said.

“Don’t try to build everything from scratch. Bring in the technology platforms that allow you to build what matters most for specific urban populations,” said Sanjay Brahmawar, CEO of Software AG.

The company has recently participated in projects in Riyadh and Dubai to do exactly that: establish a foundation, using its Cumulocity IoT integration platform, upon which smart city services can be built.

Brahmawar said that empowering these existing cities with technology — in particular IoT and analytics — can help to manage services including water, power and healthcare, making them more accessible and more affordable.

“This is how a project can remain focused on citizen, business and investor services — the priorities — and not get slowed down by technology development,” Brahmawar added.

Parant contends that Africa has all it takes to create smart cities within the existing infrastructure. His advice to innovation leaders is to have cities inspired by their history, traditions and local cultures. They should be designed by their residents and use technologies adapted to them.

A hybrid approach for African smart cities is likely

Ultimately, a mix of approaches to the smart city concept is likely to prevail.

Even though Konza Technopolis CEO Tanui oversees a massive greenfield project, he also agreed that revitalizing existing cities is another way to bring smart city services to Africa. As part of his early work as deputy country CEO and vice president of Huawei Technologies, he worked in several cities in Africa to bring applications such as smart video cameras to municipalities.

However, most African countries need to create new urban settlements and coupling them with smart solutions kills two birds with one stone, he said.

“If you check the global urbanization rate, Africa is the one [region] urbanizing at the highest rate. There is no shortcut: We must create new urban developments to accommodate the new urban population,” he said.