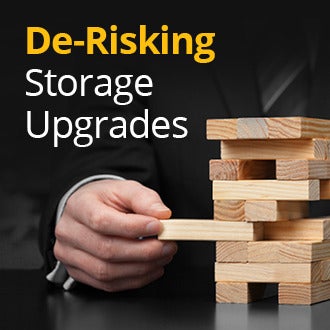 During the life cycle of an enterprise storage platform, administrators will likely upgrade that platform a number of times. In defining upgrades, we’re specifically discussing within-system upgrades that include issues like firmware and software upgrades, applying software patches, and various types of hardware upgrades where relevant (e.g., controllers, storage devices, etc.). For storage platforms that host at least some mission-critical workloads, the ability to perform within-system upgrades non-disruptively is a critical requirement.

Because it puts IT infrastructure much more in the path to critical business success, the digital transformation that most enterprises are undergoing only enhances the need for higher availability across a variety of different workloads. Design decisions as well as feature implementations can significantly minimize upgrade risk (and in some cases remove it entirely), and there are a number of things to look for in a storage system that absolutely must support non-disruptive upgrades.

IDC has noted a trend toward increasingly dense mixed enterprise workload consolidation as customers refresh their storage infrastructure. While workload consolidation can drive compelling economic and administrative benefits, it also potentially increases the size of the fault domain. This makes high availability a foundational requirement for a workload consolidation system. The overall availability of a system is impacted not only by the level of redundancy and the failure recovery routines built into a system, but also by how it behaves during routine within-system upgrades. With many enterprise storage vendors claiming to deliver “five or more nines” reliability during normal operation, customers also need to look at and understand how upgrades are performed and how those upgrades may impact application services.

That said, what should enterprises be looking for in a storage platform that needs to support truly non-disruptive upgrades?  Here are some of the key ones with quick discussions of why they’re important:

Software-defined approaches enable the virtualization of both the front end and back end of a storage system. This design enables functional updates to each half that do not impose ripple effects on the other, supporting more reliable non-disruptive upgrades. They also enable better fault isolation to minimize the impacts of any given failure while at the same time enabling less complex fault management routines that impact not only failure recovery but also upgrade execution. Software-defined designs have proven these benefits, which is one of the reasons why the industry is moving away from hardware-defined designs to more software-defined ones.

Use of these three design considerations is widespread among enterprise storage array vendors that have architected their systems within the last six or seven years. But Infinidat, an enterprise storage provider that focuses on selling large-scale systems that are specifically architected for dense mixed enterprise workload consolidation, has gone beyond these three common approaches with additional innovations that further improve their ability to provide non-disruptive operations. That is the focus of my next article on the topic of de-risking upgrades.