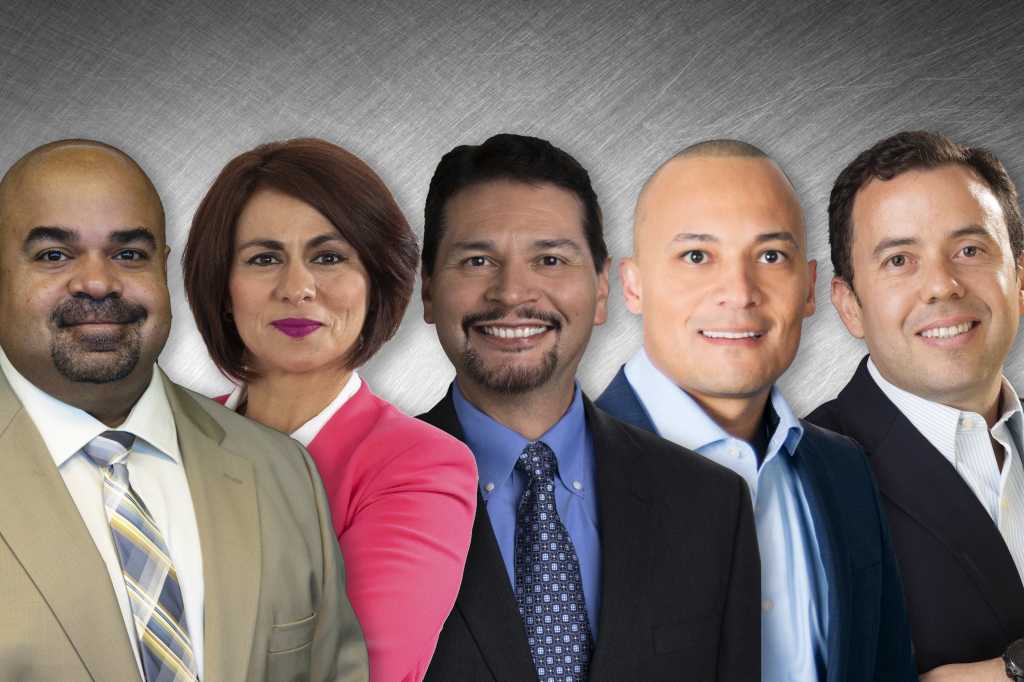 Growing up in the barrio in San Antonio, Texas, and later attending a private school on scholarship, Jesse Carrillo got adept early on at playing to a diverse crowd. The tech-inclined Carrillo didn’t exactly fit in with the rough gangs at home. Yet at school, he stood out from the wealthy, mostly white student population as one of a handful of Latinos.

Instead of identifying with one group over the other, Carrillo did what any resourceful kid might: He learned how to adapt quickly to different expectations and cultures. The character trait became a lifelong lifesaver — it kept him from being bullied as a kid on the streets and later empowered him to navigate a career in the predominantly white IT industry where he now serves as CIO.

“I learned how to adapt and make friends with different groups from gang bangers to jocks to band people via a personality that was approachable and helpful,” says Carrillo, senior vice president and CIO at Hines, a real estate investment, development, and management firm. “The ability to adapt to ebbs and flows and be social was huge. I never would have survived if I didn’t understand others’ perspective.”

Carrillo, like so many other people of diverse backgrounds and ethnicities, has had to go the extra mile to make his mark in IT. He’s pushed back against preconceived notions to get his voice heard and refined cultural behaviors that set him apart from the mainstream. It’s become the go-to playbook for minorities looking to climb the corporate ladder in tech.

Ramped-up diversity & inclusion (D&I) efforts have moved the needle somewhat, but there is still more to be done to change the face of an industry that is notoriously dominated by white males. According to the US Census, women hold a quarter of computer operations jobs while Blacks and Hispanics are even less represented, at 7.3% and 6%, respectively. While Hispanics, in particular, accounted for about 18% of the overall US population in 2019, they make up 17% of the workforce and only 4% of the executive suite. Currently, the S&P 500 counts 16 Hispanic CEOs among its ranks.

With scant representation at the top, it’s hard for Hispanic up-and-comers to break barriers or bust open preconceptions that they don’t have the right qualifications or pedigree or that they simply just caught a lucky break.

“We’re typically seen as a service industry group — Latinos do landscaping, construction, or back-office engineering,” Carrillo explains. “If you see a Latino in IT, you assume they’re a help desk or infrastructure person, not a programmer or program manager, and not high-level management potential. But you can’t let yourself get pigeonholed.”

Stand out, but fit in

For minority candidates racing for an on-ramp to the IT fast track, the best way to avoid being pigeonholed is to simultaneously bust norms while blending in. Hernando Celada’s origins story, born in Colombia to a single mom and a birth father he never met, likely doesn’t have much in common with those of his C-suite peers. Yet that hardscrabble start and his mother’s encouragement to create your own destiny inspired Celada not to let his unconventional background stand in the way of success.

“My mother didn’t handicap me and say you won’t be able to achieve certain things because you grew up under these conditions,” says Celada, now CIO of ChenMed, which provides healthcare to seniors. “At the end of the day, she said companies are going to hire the person best qualified so you can either mope about the conditions you grew up under or pick yourself up by your bootstraps and figure out how to make it work with the hand you’re dealt.”

Celada choose the latter. After high school, he got a job in a factory, but the back-breaking work made him realize he wanted better. He signed up for classes at a technical institute, still working the factory graveyard shift, learned programming on his own, and landed a job at an insurance company doing computer work. Over the years, he climbed the IT ladder at various companies, all while pursuing a four-year degree at an online school and eventually earning his MBA from University of Miami. Going that extra mile is critical for standing out. “You can’t say I’m disadvantaged, but I’m going to work the same as everyone else,” he says. “The harsh reality is you’re going to have to overcompensate and work harder than someone else.”

Eric Brown, senior manager of enterprise identity and access management at SAIC, said his strong work ethic and determination were instrumental to working his way up in IT organizations even without a college degree. He recalls experiencing discrimination midway into his career when passed over for job that went to someone that better fit the classic IT mold.

“I was told, that I was the ‘Spanish’ guy and was supposed to be a worker, not a thinker,” he recalls. “It definitely shaped me and I vowed not to be a party to that if I had the opportunity to be leader of a large team.”

Now that Brown has a leadership role, he’s committed to diversity and understanding team members’ personal stories. He’s also gone back to school to get a B.S. degree in cybersecurity because even hard work and bootstrapping has its limits. “I have all this experience, but at this level, the degree makes a difference,” he says.

What also makes a difference is being circumspect about the need to address cultural differences to fit in, especially when it comes to language. Hines’ Carrillo worked to lose a strong Mexican accent and perfect his public speaking skills while taking art classes and exploring other extracurricular interests to help him better engage with peers. Flor Lopez, IT director of governance and compliance at HP, who is based in Guadalajara, says she is careful to be sensitive to the differences between those of Hispanic heritage and others when dealing with her global counterparts.

“Hispanics are passionate in the way we approach things,” she explains. “We look at people as part of our family and treat them in that way, which can make a difference with engagement. Some people feel comfortable; others feel like you are trying to invade them, but it’s just the way we are.”

Pulling up the community

One of the key ways to promote more diversity in IT is to have multi-racial and multi-cultural representation at the top. Yet while companies are starting to dial up diversity when recruiting for top executives and board members, progress remains slow because the numbers tell the real story. If a company is searching for a seasoned, diverse CIO candidate with 20-plus years of experience, it’s a pretty small pool to fish from because the industry has only been focused on the issue for past five or so years, according to Charles Gray, partner and head of the US Technology Officers Practice, and board practice specialist at Egon Zehnder, a leadership advisory firm.

“The math doesn’t work and the pipeline is nowhere near where it needs to be,” says Gray, who advises companies to balance recruiting externally with developing their own people to cultivate a diverse IT executive succession bench. “Otherwise, you have to recruit from other companies and while that may help you solve your own challenges, it hasn’t changed the overall population of the executives in the marketplace. You’re simply shifting people from one seat to the next.”

Alejandro Reyes, digital director of smart operations at AES, counts himself lucky that the power company he works for has a Venezuelan CEO, since he was born and raised there as well. Sharing a cultural identity with the firm’s top executive has provided lots of inspiration as well as shaped decisions made as he charts his own career development and advancement.

“I see the way he has evolved and learned the language really well — things that may be minor, but are important if you are the leader,” he says. “It tells you a little bit about culture, but it encourages me. It shows that it can really happen.”

HP’s Lopez, who works in Mexico, makes it a point to champion and mentor up-and-comers, particularly Hispanic women who she says have little to no role models in the tech world. As part of her desire to make a difference, Lopez plays a pivotal role in orchestrating HP’s STEM engagement with local universities, often conducts informal chats to introduce girls to STEM in high school and elementary schools, and serves as a role model herself having earned a director’s title along with a master’s degree in digital, all while balancing motherhood.

“Putting success stories in front of them and bringing them role models to follow shows they can take a similar path and follow their dreams,” she explains. “In that way, they get interested in the field and start asking, ‘What do I need to learn to get there.’”

Aligning with D&I-oriented organizations and leveraging mentorship was essential to Miguel Diaz when carving out his IT career path. Joining the Society of Hispanic Professional Engineers (SHPE) during college helped shape his early career choices, including opening doors to co-op programs at big name companies like Walt Disney World, he says. “I looked to join organizations or do activities that suited me as a person and where I could meet people like me, like playing soccer, or joining SHPE,” says Diaz, now senior product manager of business operations systems at Pegasystems.

Above all, education is critical, but IT organizations need to be open about looking for diverse candidates in nontraditional pools such as technical schools or seek out go-getters that burnished their tech chops through certifications and online training.

“CIOs have to change their mindset and not just look for that degree from Michigan State or Georgia Tech,” says Frank DeArmas, global CIO and operations executive at WorkforceLogIQ, a provider of workforce management software. “That disallows a full set of folks that have a lot of talent to bring to the table.”

DeArmas, who is originally from Cuba, contends any Latino who makes it to an SVP position or above has a responsibility to reach back down into the community and pull others up. Forging partnerships with universities, creating internships, and helping kids in the community find the right training is all part of making sure everyone has opportunity to bring their own diverse heritage and assets to the table.

Amid the delicate balancing act of blending in and standing out, DeArmas says it’s important to remain true to yourself. DeArmas recounts a time he presented to a board of directors at a bank where he was CIO and while all went well, he took gentle ribbing for wearing what they considered to be a non-conventional suit and shirt.

“I had to really think about what do I want to do — be true to me or fit in and be another one of the boys,” he says. “I chose being true to me. Sometimes I hit my head on the wall, but eventually people come to value you for what you are.”