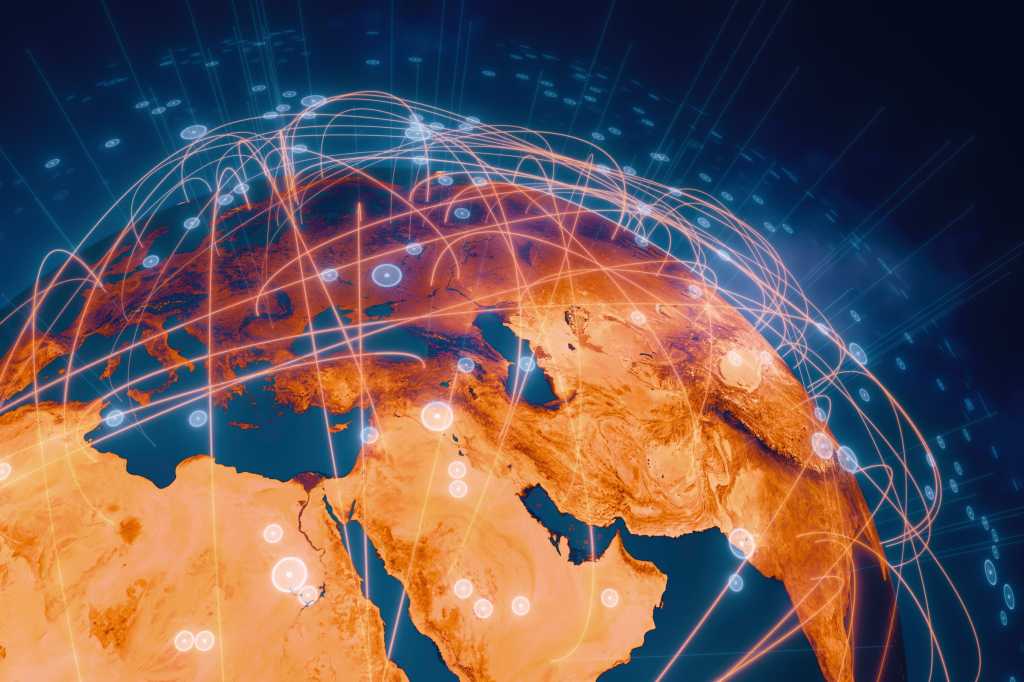 Across the Middle East, the future of food is changing. The enormous resource and environmental cost of traditional agriculture in an unforgiving desert environment has led to the emergence of many new agritech companies as well as an unprecedented level of investment in emerging agriculture technologies.

The United Nations Population Division projects that the world population will grow to 10 billion people by 2050, and the population of the Gulf region alone is set to double in size by the same year. The global challenge of food security is even more critical in the Gulf region, where an estimated 85% of food is imported from abroad.

The pitfalls of this risky strategy were made apparent during the COVID-19 pandemic, when supply chains were catastrophically disrupted. Where farming is possible, the arid climate and extremely limited water resources make traditional agriculture unsustainable, requiring many communities to truck in fresh drinking water after available stores have been depleted in fields and greenhouses.

The time to adopt new and sustainable agricultural technologies in the Gulf and wider Middle East is now. According to the 2020 Global Agricultural Productivity Report, total productivity needs to increase 1.73% annually to double agricultural output by 2050 sustainably — without reaching these milestones, the “productivity gap” will grow, increasing the reliance on traditional farming and raising food prices in a vicious cycle that will increase food insecurity in the region. Innovation in agritech is critical to reduce import dependency and create sustainable supply chains.

“The cry for change, for sustainability, and for safer food alternatives has been getting louder, whether it be by the government, media, or consumers, who demonstrate the very real demand for technologies to address these very real challenges,” explains Sky Kurtz, co-founder and CEO of Pure Harvest Smart Farms. “A fast-growing population and growing tourism are increasing the demand for healthy food options, and consumers increasingly prefer locally-produced food.”

Where there are significant challenges, there are also significant opportunities: Middle Eastern agritech has received impressive support from government initiatives in recent years. These include Saudi Arabia’s Vision 2030, which places a huge emphasis on sustainable agriculture; Bahrain’s Food Sustainability Initiative; and the UAE’s newly established Agricultural Development Team and accelerator program.

Cutting-edge agritech start-ups are emerging across the Gulf region, particularly in the UAE. Just last year, the Abu Dhabi Investment Office awarded $100 million to four companies in the region to discover which technologies have the greatest impact on food security. The disruption of food supply during the pandemic is likely to result in the creation of even more agritech-friendly domestic policies in the Gulf and across the Middle East  — a win for locals and investors alike.

What they do: Palmear’s acoustic sensor and AI-powered platform combat a small pest with an enormous capacity for destruction — the red palm weevil. This insect is responsible for the widespread infestation of date-producing palm trees, 60% of which are cultivated in the Middle East. Early detection is critical: 80% of the insect’s life cycle is invisible to farmers’ eyes, and most infestations on tall palms are not apparent until the tree simply collapses. Palmear’s sensors immediately detect red palm weevils as early as the larvae stage and allow farmers to isolate and treat infested trees, significantly reducing the loss of palm groves and crops. The user platform utilises satellite imagery and AI to give farmers real-time data about the health of their palm trees.

Why they are a hot agritech company to watch: BeyondCapital, a Jordanian seed-stage firm, created with a US$10 million grant from USAID, recently invested in Palmear. In February 2021, Palmear joined Nvidia Inception, an accelerator platform which provides deep learning credits and technological assistance to AI start-ups

What they do: Mozare3 offers market access, financial products, and agronomy support to unbanked farmers in Egypt through its agri-fintech platform. The platform allows farmers to easily manage their accounts, promote products to buyers, and set fixed prices on crops to earn a stable income in Egypt’s opaque and fluctuating agricultural market. Mozare3’s team meets with sales departments in food processing companies to help farmers plan crops in advance, then provides farmers with agricultural tools like seeds and irrigation equipment. When crops are sold to food distributors and manufacturers, users can view detailed information about the origin and harvest of the lot. The system makes crops completely traceable, which can improve food safety for the end user, reduce revenue loss by making recalled lots immediately identifiable, and reduce disruptions in the flow of inventory.

Why they are a hot agritech company to watch: In May 2021, Mozare3 finished a successful pre-seed funding round led by Algebra Ventures and Disruptech Ventures worth over $1 million.

What they do: Red Sea Farms is harnessing the potential of sea water to cool its greenhouses and irrigate specialised crops to reduce fresh-water waste in agriculture. Instead of desalination, which is energy-intensive, the start-up replaces up to 95% of the fresh water used for evaporative cooling with salty water. Their greenhouses are equipped with panels created by iyris Technologies, which not only absorb infra-red light to passively block out heat, but also produce solar energy. Produce grown at Red Sea Farms is organic, pesticide-free, and non-GMO.

Customers: Supermarkets across Saudi Arabia, set to expand to the UAE

Why they are a hot agritech company to watch: Following a $1.9 million joint investment from Research Products Development Company and the KAUST Innovation Fund, Red Sea Farms has raised an additional $10 million from investors in 2021 including venture capital firm Global Ventures, the Future Investment Initiative Institute, KAUST, and Wa’ed, Saudi Aramco’s entrepreneurship arm.

What they do: Pure Harvest is a controlled-environment agriculture farming venture that uses AI, robotics, and hydroponic technology to cultivate produce year-round in desert environments. Instead of soil and chemical fertiliser, plants are grown in a nutrient mixture and pollinated by bumblebees. The greenhouses use sensors to adjust temperature, moisture, and sunlight for optimised growing that is 30 times more efficient than traditional farming. The company also plans to launch an algae bioreactor facility that will develop healthy Omega-3 fatty acids, without the high economic and environmental costs of fish farming.

Customers: Restaurants, hotels, and retailers such as Spinney’s, Carrefour, and Waitrose purchase about 600 tons of produce every year.

Why they are a hot agritech company to watch: Wafra, Kuwait’s national investment company, pledged a performance-contingent commitment of $100 million to Pure Harvest in April 2020 – the largest agritech investment in the MENA region to date. In 2021, Pure Harvest experienced a growth equity raise of $10 million led by Sancta Capital, quickly followed by an additional $50 million in growth funding led by SHUAA Capital a few months later. Operations are set to expand to a new 80,000 square-meter farm in Kuwait per a recent agreement with The Sultan Centre in Kuwait worth $35 million. In March 2021, Pure Harvest secured $60 million in growth funding, inclusive of a $50 million sukuk (a sharia compliant financial certificate).

What they do: Madar Farms creates controlled indoor-environment and hydroponic infrastructure made out of one of Dubai’s most ubiquitous objects: shipping containers. Inside Madar Farms’ facilities, LED panels are used instead of sunlight for a more water- and energy-efficient model of growing that helps drastically reduce evaporative cooling – an important feature in a water-scarce country that currently dedicates approximately 70% of water resources towards agriculture alone. The start-up’s output is focused on a diverse array of pesticide-free microgreens; their diminutive height makes them well-suited to vertical farming. The pilot project of this new model, created in cooperation with the Emirates Food Security Council, is available through on-site viewing windows to visitors in Masdar City in Abu Dhabi.

Customers: Engineering and procurement of containerised controlled environment agriculture is available to growers in the GCC and businesses such as retail stores, restaurants, and hotels; the microgreens are also available to consumers from retail partners such as Noon Daily, Narinport, and Barakat Fresh.

Why they are a hot agritech company to watch: This year, Madar Farms is teaming up with vertical farming start-up Intelligent Growth Solutions to install five Growth Towers with 1,500 square meters of growing space. The strategic partnership has been facilitated by a $100 million investment from the Abu Dhabi Investment Office, shared with three other agritech start-ups operating in the MENA region.

What they do: At its state-of-the-art research and development facility, RNZ tests and develops new crop-specific agri-input solutions including water-soluble, granular, and organic fertilisers for hydroponic and vertical farms. RNZ’s academy shares field trial results with agronomists and farmers in dedicated courses that educate about sustainable application of plant nutrition to conserve soil and maximise output.

Customers: Growers and agronomists in Africa, Asia, and the MENA region

Why they are a hot agritech company to watch: Like Madar Farms, RNZ is one of four agritech companies picked by the Abu Dhabi Investment Office to share a $100 million targeted incentive program aimed at developing new agricultural solutions for drought-prone climates.