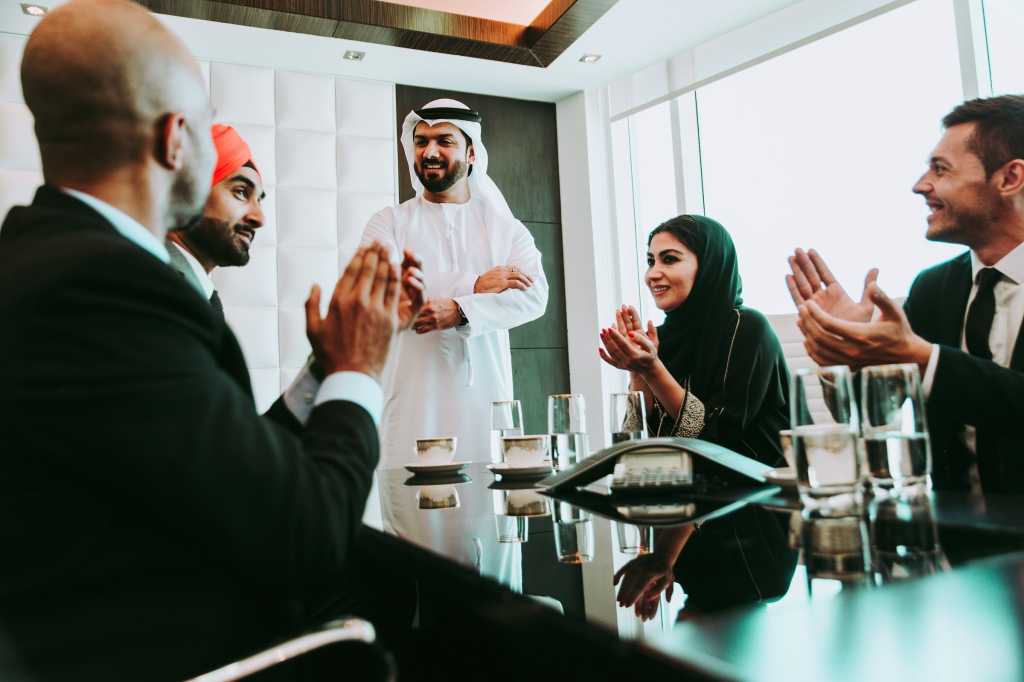 The Middle East’s tech boom is under way as government initiatives prioritise digital transformation, tech start-ups report a record number of investment deals, and emerging technologies take centre stage in both the public and private sectors as many countries in the region aim to diversify their economies.

The high rate of population growth across the Middle East and the fallout from the COVID-19 pandemic underscore the importance of large-scale, government-led initiatives that prioritize training and investment in technology to future-proof economies from challenges such as oil price shocks, climate change, and disruptive global events. However, many countries struggle to find tech talent with key skills to achieve the goals laid out in their 2030 vision plans.

“As Middle East enterprises go through accelerated digital transformation initiatives, the need for tech specialists is increasing exponentially,” explains Jebin George, senior program manager of customer insights and analysis at IDC. “At the same time, the shortage of skills is one of the biggest challenges CIOs face regarding their digital transformation plans.” An IDC CIO survey revealed that professionals with skill sets in cybersecurity, data and analytics, cloud, and AI are currently in demand.

“Research and development is essential to ensure sustainable long-term innovation. The presence of research-focused academic institutions, with solid funding from the government and extensive industry-academia collaboration will ensure the steady inflow of quality talent,” George said

The skills gap in the Middle East, however, means that countries must compete for that talent.  Read on to see what Middle Eastern nations are doing to attract and retain foreign IT professionals.

This year, the UAE made the most significant moves in the Middle East to lure foreign tech talent. lts recently announced National Program for Coders offers 100,000 long-term “golden” visas to talented programmers who can support the nation’s growing IT infrastructure and smart city projects. The golden visa initiative followed the announcement, earlier in the year, to allow full naturalization for foreigners, with dual citizenship.

Business-friendly government policies, tax-free salaries, and landmark investments in technology projects make the UAE a hub for tech professionals and entrepreneurs from all over the world. So-called free zones allow foreign entrepreneurs global companies to set up and own 100% of UAE-based companies and subsidiaries. A recent study from Velocity Global, a recruitment and professional employment organization (PEO), ranked the UAE as the Gulf country that is most attractive to foreign tech companies.

Saudi Arabia is making strides in attracting tech talent. In 2019, existing work visas were extended from one year to two, free of charge, and a new “Premium Residency” program granted highly skilled individuals the right to live, work, and own businesses and property without a Saudi sponsor. As SMEs bore the brunt of the economic downturn in the wake of the pandemic, the Ministry of Human Resources and Social Development rolled out a new “instant” work visa service that makes it easier for SMEs to recruit professionals with key skills and accelerate the growth of their business. The initiative is a win-win: it includes a framework for nationalising foreign workers, while allowing the businesses to have the stability they need in order to create job opportunities for Saudi nationals.

The program is a part of the National Strategy for Digital Transformation, including objectives like the creation of 300 AI start-ups, the allocation of the full 6GHz frequency band for lightning-fast Wi-Fi, and broad adoption of IoT services such as an autonomous public transit system,

Robotics is on the rise as well: the country was the first to grant citizenship to a robot, serve pilgrims taking part in the Hajj with medical services powered by robotics, and “hire” a robot as a government employee — complete with its own ID card.

Over the past decade, Bahrain has laid the groundwork for a tech-forward and highly digitalized society: superior fibre optics systems, nationwide high-speed 5G internet, near-universal mobile penetration, and the trailblazing “Cloud-First” policy that made Bahrain ranked number one in the Middle East for ICT-readiness by the World Economic Forum. As the public sector continues to integrate emerging technologies into its day-to-day activities, flourishing business sectors include telecommunications, IT services and consultancy, cybersecurity, AI, and data management.

Bahrain’s Labour Market Regulatory Authority halted the issuance of all foreign worker visas for five months in March 2020. Now that new visa applications are being accepted again, a directive from Prince Salman bin Hamad set out to alter the hiring process in the private sector by prioritising either Bahraini nationals or foreign workers already residing in the kingdom. The policy has brought about a shift in hiring patterns, as start-ups and tech companies are focusing their efforts on employing remote workers.

Although opportunities may be more challenging to find for tech professionals, Bahrain is a dream for investors: like in the UAE, foreign investors in Bahrain are offered 100% business ownership and 0% personal and corporate tax on investments in the ICT sector.

Kuwait is a leader in the Gulf region in the fintech sector, with at least 47 start-ups in Kuwait City alone. Magnitt found that Kuwait ranks fourth in total start-up funding in the MENA region after the UAE, Egypt, and Saudi Arabia. In January 2019, Kuwait’s government established an investment fund worth US$200 million to support tech companies and digital economy projects. Foreign workers can benefit from low taxes and relatively high income, but with little to no chance of receiving Kuwaiti citizenship.

However, prospects for future foreign tech professionals look dim. In June 2020, Prime Minister Sheikh Sabah Al-Khalid Al-Sabah announced that the government will seek to reduce the percentage of non-nationals — which make up 3.4 million of Kuwait’s 4.3 million population —  from 69% to only 30%. Not only will fewer visas be issued, but permitted stays will also be shorter: the Ministry of the Interior announced that residency permits for foreign workers will only be granted for only one year.

Like in Kuwait, the majority of Qatar’s 3 million residents are foreign workers — in fact, nationals only number 15% of the total population. In Qatar’s capital, you can find branches of some of the world’s biggest tech and telecommunications companies, a flourishing start-up scene, and state-of-the-art ICT infrastructure that is being rolled out impressively quickly as part of the $1.64 billion-dollar “Qatar Smart Nation” program, known as TASMU. The US International Trade Administration projects that Qatar’s top-growing tech fields in the next few years will be cybersecurity, smart city solutions, and fintech.

Visa options for professionals, even those from in-demand technology fields, are quite limited: most work visas arranged by an employer last one to three months and are eligible for renewal only in three-month increments. Qatar requires that businesses prove that no available Qatari national could fill a position before hiring a foreign worker. Furthermore, married women must receive written approval from their husbands before being allowed to register for work. Qatar’s “kafala” visa sponsorship system means that employees are bound to their employer, and are required to receive the consent of their employer before the contract is terminated or before leaving the country.

Until 2018, the number of foreign workers in Oman was steadily rising. Foreign hires in agritech, fintech, AI, and cybersecurity could take advantage of growing opportunities in the country’s vibrant start-up landscape. Oman’s Vision 2040 outlines the country’s push towards a diversified economy and stronger IT infrastructure that supports all sectors of Oman’s economy. However, a new policy from the labour ministry will actually increase fees for companies who choose to hire foreign workers in specialized and senior positions. The government seems increasingly oriented towards its long-established “Omanisation” policy of prioritizing job opportunities for Omani citizens: In February 2021, the Ministry of Labour announced a plan to replace foreign workers in higher education with locals as soon as their work permits expire. Last year, the population of international workers in Oman fell by over 15%.

For tech professionals who are keen to invest, it’s a completely different story. Beginning in September 2021, investors in various sectors, including information and technology, will be offered five- and 10-year residency visas, providing an exciting opportunity for innovators and entrepreneurs.

Egypt’s Ministry of Manpower and Immigration mandates that only 10% of the workforce can be made up of foreign residents. Permits are typically granted for only one year and are eligible for extension for up to five years without the possibility of permanent residency.

Tech investment in Egypt is booming: digital funding platform Partech reported that 24% of Africa’s investment deals took place in Egypt in 2020, increasing 83% year over year and pushing Egypt to the top spot for number of investment deals in Africa. Twenty-eight percent of these deals were in fintech, with start-ups like Telda and Cassbana aiming to bring financial services to the 67% of the country that remains unbanked.

Egypt is also prioritizing digital transformation, allocating 300% more investment for projects in the ICT sector in 2021. “Digital Egypt” lays out a roadmap for digital transformation in areas like e-government, training programs, and projects that support Egypt’s innovation ecosystem. Egypt recently embarked on a smart city project just outside Cairo, the “New Administrative Capital,” costing $45 billion. Project managers are hiring engineers and tech professionals in a wide variety of fields including optical fibre infrastructure, surveillance and security, and renewable energy. $640 million has already been allocated for telecoms and tech service contracts in the smart city, which is projected to open at the end of 2021.