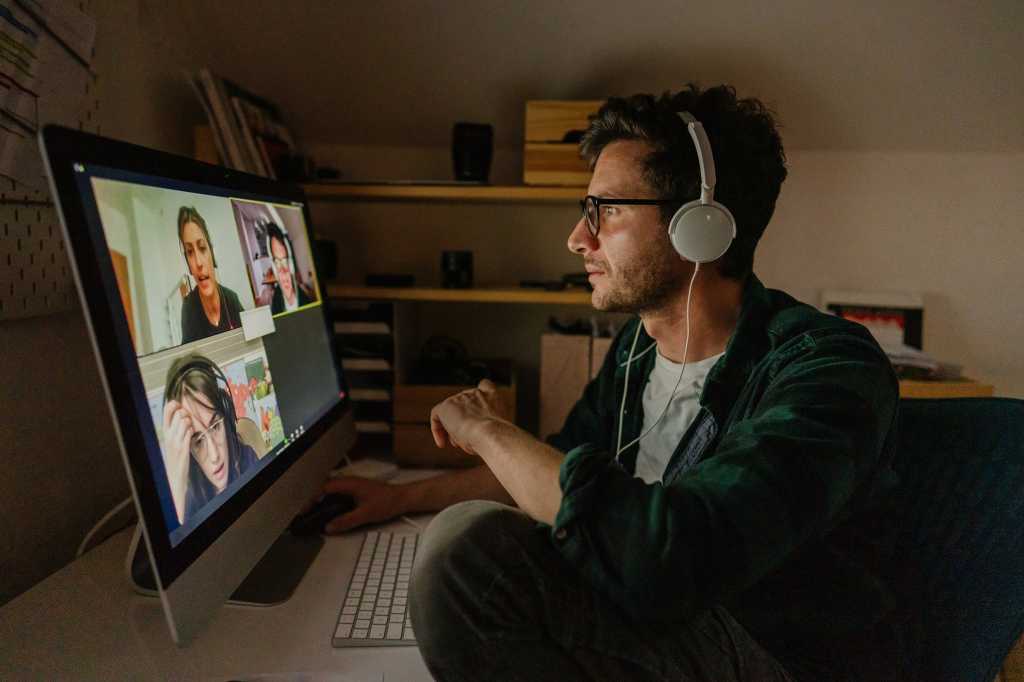 The pandemic proved that working remote works. People were productive — often more productive than they were in the office — and want to keep doing it. But if you were the kind of manager who led by owning a room and promoted people because you could see they were charismatic, dedicated, or natural leaders — qualities you watched them use — you might be feeling lost right now when it comes to knowing whom on your team you should tag for promotion.

When everyone worked in offices together, identifying talent involved “a lot of one-on-one interactions,” says Ryan Hicke, CIO of SEI. “We used a lot of processes, in terms of performance evaluations and rankings, but a lot of those were  influenced and driven by personal experience.”

Going remote changed that. Identifying talent is no longer a feeling. It involves metrics, emotional intelligence, and remote skills that are new and, quite possibly, uncomfortable.

I spoke to IT leaders who struggled with this and came up with solutions. Many of them discovered that, once you push through the change and embrace the right tools, strategies, and metrics, identifying talent is easier — and more egalitarian — when you do it remotely.

Here is their advice.

Become a virtuosa conductor of the video call

Video calls have become the main point of contact for teams, and leaders agree they can eat up time and become a Brady Bunch roundup of faces of participants who are barely paying attention. But these calls are whatever you make them.

“They are a great opportunity to build a teaming relationship — or to mess the whole thing up,” says Amy O’Connor, chief data and information officer at Precisely. The trick is to take control and transform these calls from awkward and formal to a relaxed, comfortable, and functioning place to work.

“We’ve had a few big projects where, if we’d been in the office, people would have been in conference rooms at all hours. We were able to gather virtually in a similar way. People came into the meeting, left, and joined again. They listened, shared their screens, and asked questions” says O’Connor. “One guy went through a drive through. Later, someone told us about the music he was listening to. It was like an agile environment where people worked around one big table — but remote. I try to facilitate exactly that. I take a step back, and let people be individuals.”

Make people talk about themselves

No one wants to add another video call to their lives, but O’Connor has discovered that “meetups” inform her management decisions unlike anything else. These are not status meetings or a place where work gets done. They exist for the sole reason of getting people to demonstrate who they are when they are at work.

“The entire IT team gets together, and we ask, ‘Who wants to show their work?’” O’Connor says.

The five people that want to each get five minutes. No one is expected to explain so others can understand. “Most of the time, people don’t understand other people’s work,” laughs O’Connor. “But some of the quietest people want to do this because they aren’t creating a PowerPoint for me, they are just showing us what they do. At the end of it, I’m like, holy cow, I don’t understand anything you just said but it was cool. All I do is applaud.”

These one-hour-per-month meetups help O’Connor know whom to invite to upcoming meetings, who is dedicated and valuable, what people are doing, and who is killing it when it comes to merit and promotions.

“It also helps peers to respect each other,” she says. “Even though, technically, they may speak completely different languages.”

“With the absence of water-cooler chats, happy hours, and stopping by a coworker’s desk to ask questions, leaders provide the context and inspiration to unify a team and allow employees to see the future and want to be part of making it happen,” says Colleen Berube, Zendesk’s CIO and SVP of operations.

Doing that, according to Thomas Hazel, CTO, chief scientist, and founder of ChaosSearch, might involve embracing your inner stand-up comic. A quarter of ChaosSearch employees were hired remotely in the past year, and Hazel knew that getting to know all these people would have to happen through video calls.

“I take the first five minutes of every town hall meeting to do something fun,” he says. “To keep it light. I dress up, make fun of myself, and make fun of other employees.”

In many ways, he says, identifying talent is easier in a remote environment. “In engineering, you are quantified by the work completed and it is easier to see who gets more work done this way. What’s hard is finding leadership skills.”

An engineer for whom riffing in front of a camera, telling jokes to a computer screen, and creating hilarious TikToks or YouTube videos comes easily, he believes, would be someone he would tag for leadership in this environment.

Give people a way to rise to the challenge

Hicke’s management team at SEI tried several ways to attack the problem of recognizing talent. One solution that worked surprisingly well came as an idea from a member of the management team: Create an internal open-source problem-solving environment.

“It might be something like refactoring an application to make it ready for the cloud,” he explains. “We open it up to the technology teams and say, ‘If people want to try to work on this, here it is.’” Participation is completely voluntary.

“It has been very cool to see how many people participate,” he says. “It has also been a fun way to get new employees engaged and working with members of other teams. It’s a way for them to dive in, no harm, no foul because there is no getting it wrong.”

The idea took on a life of its own, in fact, when some longstanding employees announced they wanted to use the challenges to get educated, technically. That led to an informal, internal university where “people within our own technology group are teaching courses to other employees,” says Hicke.

It also brought team members who might never have met together over a shared problem. “We might have somebody from the design team, somebody from development, and somebody from our performance engineering all trying to solve one of these problems together without realizing how much they’re crossing over and interacting.”

Measure outcomes and know your people

“It’s important that leaders measure outcomes, ,” says Sheila Jordan, chief digital technology officer for Honeywell. “But what I’ve learned about being remote, is that you have to spend a few minutes reaching out to people saying, ‘Hey, how are you? How was your weekend? What’s going on?’”

This doesn’t require that you do one-on-one calls with everyone — that would be 2,000 people for Jordan — she says it’s better to take advantage of the few minutes at the beginning and end of a video call when people are assembling and departing.  And during the call, she recommends calling on people and asking them to weigh in.

Jordan has come to see remote work as a great equalizer when it comes to recognizing talent. It overcomes the problem of people who are good at appearing busy but don’t produce. It gives equal time to introverts and those who tend to get talked over in meetings. And it makes connecting with people something you do with intention.

“On Zoom or Teams, all voices are equal,” she says. “I want to make sure, if we go back to the physical office, that we don’t lose that. It’s a real advantage of the technology.”

“On a remote team, you look for slightly different skills,” says Nico Avila, North America CTO of Globant, a company that has operated distributed teams from its origins. “Being culturally aware, for instance, is an asset because you want people who can bring teams together.”

But how do you identify something so ephemeral?

“We created a tool that encourages peer recognition,” he says. Originally it was created for internal use, but it worked so well, the company offers it to clients. StarMeUp enables people to give “stars” to peers who have done something positive. And it has become an important remote management tool, giving the management team insight as to who creates contact points, locally and virtually, within the company.

“You end up with a network of stars that helps us understand how people relate,” says Avila. “For example, when we acquire a company, that office has no stars being sent to it and no stars being received. But a year later, we see how connections have evolved.”

It allows management to see who is a local influencer, who reaches out across geographies, who has a big network, and who is a hermit.

“You can also see when someone’s pattern changes,” says Avila. “Maybe their contact has dropped off and you need to reach out to see if they are struggling.”

Bake training and career growth into every day

According to John Ezzell, co-founder and executive vice president of BIAS Corp, “being able to recognize your talent is an important part of keeping it, especially in a highly competitive technology industry. BIAS takes no chances with this, baking career advancement into everyday operations and training, Ezzell says.

“To develop our high potential leaders, we started our NextGen Leadership program and NextGen CTO Program,” he says. “Employees are selected by leaders and other teammates as part of a talent review process where we are focus on developing their professional skills and personal brand.”

And, lest people grow lazy about nominating their peers, the management teams seek out these nominations. “We are always asking who are top performer on the team? Who would you recommend for leadership training?”

For those who embrace it, remote is a great equalizer

“I think it’s easier to identify top talent in a distributed model because results are more important than the optics of appearing busy,” says Brian Rutkowski, chief people officer at Olive. “The folks who get promoted are not the ones staying in the office the latest or talking the most in meetings, they are the ones producing the best outcomes.”

As others have said, results — especially in an engineering environment — are easy to measure remotely.

“But we also ask for feedback,” says Rutkowski. “Employees give public or private praise to their colleagues. If somebody’s doing a great job, and somebody shouts them out, I get a notification. We’ve also implemented upward feedback in our performance review process. So not only is the manager giving feedback on an employee, but the employee is giving us feedback on their manager. In a distributed model, micromanagers are not really needed. So, this helps us identify managers who are not only good at managing up and presenting to executives but who are doing well at growing their teams.”