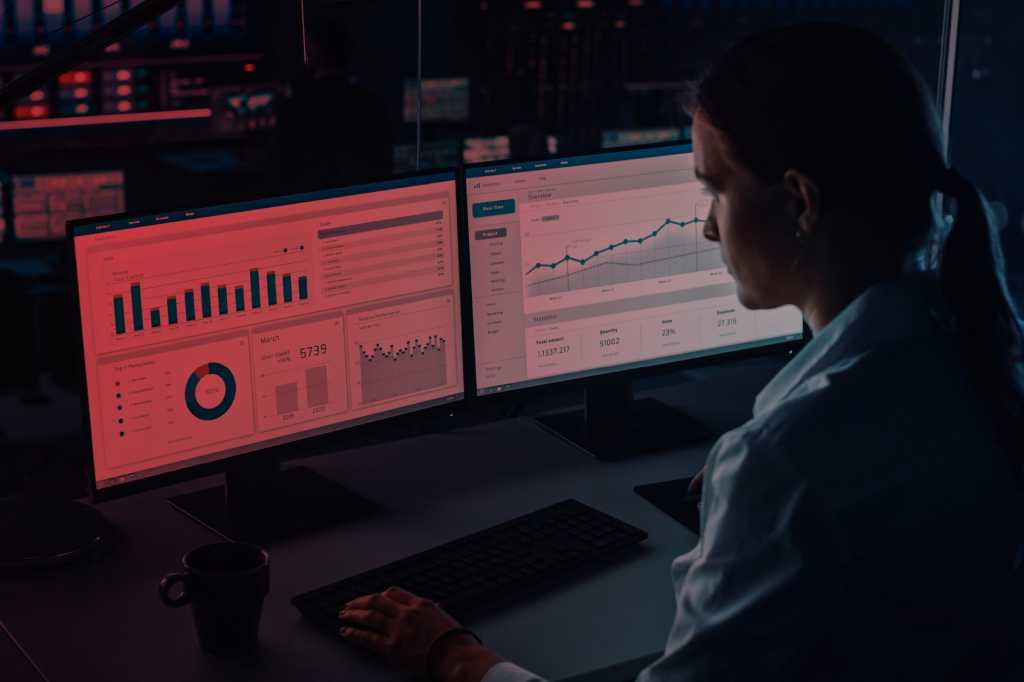 Computing at the edge helps support initiatives such as the internet of things (IoT), by enabling remote processing of the data gathered by connected objects. Without such systems in place, the immense amount of data generated by connected devices would easily overwhelm an organization’s central data infrastructure — or incur significant costs if shuttled to cloud repositories for analysis.

By pushing more analytic capabilities to the edge, where data is collected, organizations can achieve greater responsiveness and efficiency. Here are some examples of how organizations are deploying analytics at the edge for a variety of use cases.

Trimble Transportation provides technologies such as routing and optimization, tracking and visibility, and safety and compliance systems for its customers. Those clients, generally motor freight carriers, generate more than 10 billion data points each day from their in-cab telematics devices. That includes more than 50 variables such as engine temperature, turbo speed, oil pressure, velocity, and coolant levels.

An increasing number of vehicle sensors monitor key performance metrics and alert drivers to issues such as low tire pressure, lane departures, and back-up obstacles. While this has enabled many advances in safety technologies, it also generates a massive volume of data that needs to be processed quickly in order to be useful in real time.

For Trimble, edge analytics provides a way to deliver insights faster. The company, which is creating a connected supply chain by developing hardware and software for transportation and logistics companies, is building a hub-and-spoke network system where the back office of a trucking carrier is the “hub,” says Chris Orban, vice president of data science at Trimble.

The hub includes applications such as transportation management systems, order intake, safety and compliance, and other operational systems that rely on data provided by the “spokes,” Orban says.

“The spokes in this model are the truck drivers who use edge technology like onboard computers, electronic logging devices, and more in the cab while they’re on the road,” Orban says. “These devices are connected to the cloud via 4G LTE networks, and are performing many calculations on the edge. These calculations include tracking a driver’s hours of service, reporting on safety events, and scanning electronic documents such as proof of delivery.”

The company has been using some iteration of edge computing for years, Orban says, starting when the tracking of commercial vehicles became regulated. Trimble’s early electronic devices in the cabs of trucks relayed back simple information about where trucks were, as well as fuel levels, “providing communication to the back office during a time when we didn’t all have cell phones in our pockets,” he says.

The key business driver for this was the need for trucking companies to know where their assets were, and the ability to communicate with drivers and devices that might be outside of cellular coverage. “The devices had to function on the edge with drivers, because satellite communication might have been their only connectivity option,” Orban says.

From a safety standpoint, all of Trimble’s mobility devices interface between the engine control module (ECM) of a commercial truck and the company’s own and third-party safety tools to provide functions such as hard braking alerts, following distance warnings, and roll stability control notifications.

“In the cab, the driver can receive immediate feedback about their driving behavior and can modify it effectively in real time, or the device can do it for them,” Orban says. “For example, if they see that they are going around a curve too fast and the roll stability control triggers, that device can actually trigger the brakes and slow the truck down and bring it into a state where that roll stability control is not firing anymore.”

Trimble also offers edge applications for calculating a driver’s fatigue, based on their hours of service.

Another big area where Trimble is investing in its data analytics and edge computing capabilities is video. “Many commercial vehicles today have cameras installed in the truck, either pointed outwards or inwards on the dash, on the side mirrors, a reverse camera in the back, or all of these,” Orban says. “The amount of information that can be gleaned from these visual data sources is immense.”

Trimble’s Video Intelligence tool is triggered when a safety event occurs, such as a hard braking event where a driver slams on the brakes to avoid a collision. These videos can be used to mitigate risk for a driver, to prevent liability during an accident, or for driver training purposes.

“We’ve gone so far beyond the standard dash cam to a place where now we have truly integrated video systems that can help a driver with their work by looking down the side of the truck to give them lane departure warnings, help them properly position at a loading dock, and more,” Orban says.

Trimble’s data science team is deeply involved in its edge analytics offerings, Orban says. “Our team invests a great deal of time working directly with customers to understand their specific needs for their business,” he says.

Typically, as Trimble customers begin to apply safety systems, they see an incremental improvement over time. “Often, they will experience a 10% to 15% reduction in their drivers’ preventable accidents, as they apply different kinds of critical event warnings, such as hard brakes, roll stability control, and more,” Orban says. “Those sorts of edge solutions are literally changing the behavior of the driver who’s taking these actions.”

The City of Las Vegas is using edge computing, including an IoT deployment, for traffic control and to automate communications with autonomous vehicles.

“We are looking for ways to improve operational efficiency while providing benefits to the community,” says Michael Lee Sherwood, chief innovation officer in the city’s IT department. “Edge computing enables IoT systems to process critical data and provide real-time analytics and data.”

The traffic system, known as Blackjack, uses a platform supplied by Cisco that monitors traffic flow and provides real-time traffic statistics and capabilities for communicating with autonomous vehicles.

“Edge computing allowed for data to be analyzed and provided to the recipient in a manner which provided the best in speed,” Sherwood says.

The addition of predictive analytics and artificial intelligence (AI) is helping with decisions that are improving traffic flows, “and in the near future will have dramatic impacts on reducing traffic congestion and improving transit times and outcomes,” Sherwood says.

To help bolster its data analytics operations overall and at the edge, the city government is developing a data analytics group as an offshoot of the IT department. The Office of Data and Analytics will drive how data is governed and used within the organization, Sherwood says. “We see lots of opportunities with many new technologies coming onto the market,” he says. “Our main goal has focused on building our team and working on the governance and the curation of data sources.”

The benefits of the early stages of the deployment include enabling traffic intersections to adjust signaling timing based on actual traffic flows. This “is a positive indication of how these new technologies can really help create solutions which benefit everyone in the community,” Sherwood says.

With AI now playing a role in some of the city’s newest smart systems, the need for edge computing and analytics at the edge will only grow, Sherwood says.

Most of the challenges of edge computing involve deciding on what processing to do at the edge, and how the data is stored and for what time period, Sherwood says. “We are still working through this process, and the more systems and pilot projects we undertake, the more we learn about the art of the possible and reality,” he says.

Satellogic, a company that provides commercial and government customers with high-frequency, high-resolution geospatial

imagery and analytics, is taking the concept of edge computing to the extreme.

The company, which manufactures its own satellites, is working with several partners, including big data analytics software provider Palantir Technologies, to move its data analytics to the edge of its network — on board its satellites.

Satellogic is building and operating a constellation of satellites that collect multispectral and hyperspectral images as well as full-motion video, says Gerardo Richarte, CTO and co-founder of the company.

“When designing and building our first satellites — over 10 years ago — we knew that we needed to make decisions at the edge,” Richarte says. “Our first satellites flew with hardware and software onboard to take advantage of edge computing, and being vertically integrated meant we could be highly agile in developing and testing new technologies in orbit.”

Initially the satellite-based computing work was internal and experimental, Richarte says. “As our customer base expanded, we started working with customers to stream their image-processing algorithms in orbit,” he says.

Edge computing unlocks three major enhancements to Satellogic customers’ experience, Richarte says. “First, edge computing will allow us to provide customers with real-time alerts,” he says. “The closer we are to the source of information, the sooner we can generate and dispatch the alerts each of our customers requires.”

Second, the company can take actions at the edge, including retasking. “When a particular object of interest is flagged by an algorithm, we can instantly retask a satellite to lock onto, track that object, or enable a different product like a full-motion video capture,” Richarte says.

An algorithm might trigger a satellite to instantly turn on a particular payload to capture data that would have otherwise been missed. Full-motion video (FMV), for example, “is an excellent application for edge AI, as it can prove critical for certain kinds of decision-making,” Richarte says. “But [it’s] far too data-intensive to run continuously.” Edge AI algorithms programmed according to precise customer needs can define the parameters for leveraging Satellogic’s FMV along with other data and cost-intensive payloads, he says.

Finally, edge computing can be leveraged to prioritize data transport. “Remote connections from orbit to ground have limited bandwidth, and data download may take longer than required by certain applications,” Richarte says. “By running satellite data through algorithms at the edge, we can orchestrate data transport according to each individual customer’s priorities and goals.”