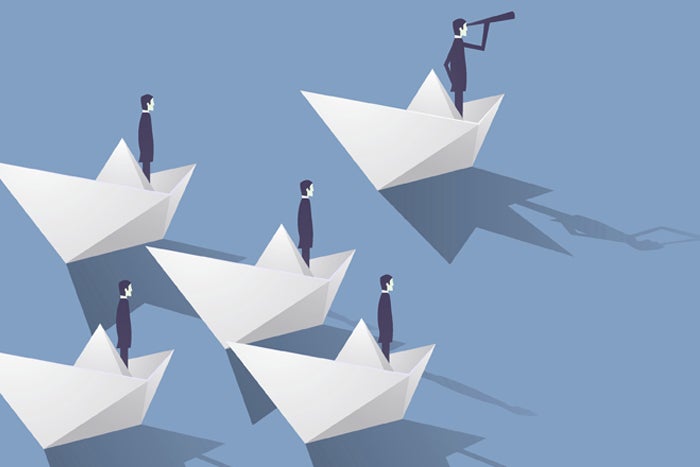 The California Psychology Inventory (CPI), developed by CPP — the exclusive publisher of the Myers-Briggs Type Indicator assessment — is an assessment tool that help leaders gain more insight into and improve their performance. Ultimately, the CPI helps identify your leadership strengths and weaknesses, what motivates you and can help you understand your personal “thinking style.”

This year, the CPP released the seven key traits CIOs need in order to be successful leaders. These are the key traits most commonly associated with CIOs who have taken the assessment test. According to Sherrie Haynie, an organizational development consultant and personality expert with CPP, these traits are set to become increasingly important as cloud infrastructure pushes these leaders to become “agents of change.” Businesses will need strong CIO leadership to smoothly navigate such a transitional time in technology — and a good place to start is to find someone who has these seven leadership traits.

Part of running a successful business involves understanding your employees and their day-to-day roles inside the company. But your employees are often juggling more than just their day jobs — the American Institute of Stress cites workload, people issues, work-life balance and lack of job security as four of the biggest stressors facing modern workers. And, as the American Institute of Stress points out, increased levels of job stress can lead to less engaged, productive and effective employees.

“Empathy is one of the most critical competencies in the execution of leadership. CIOs who demonstrate empathy are able to get inside their employees’ and co-workers’ experiences and try to imagine what they are thinking and feeling. CIOs who display a high preference towards empathy understand that getting buy-in from the rest of their team requires others to believe in their message,” says Haynie.

Building a culture of empathy starts at the top by setting a standard for everyone else to follow. An empathetic company culture will encourage workers to speak up if they’re struggling either personally or with their workload.

Dominance in leadership requires a delicate balance — an overly dominant leader won’t gain many followers, while a nondominant leader may portray a lack of confidence. The best CIOs and leaders are the ones who can find a balance between dominance and empathy, says Haynie.

“Dominance is a trait that goes hand-in-hand with empathy because as leaders display dominance, it is imperative that they temper that trait with empathy. CIOs drive to lead and influence their team stems from their ability to assert dominance, which entails directing and persuading other,” she says.

A dominant leader isn’t afraid to make decisions, fix mistakes and support their team — a type of leader employees trust and can count on. The last thing you want to do become so dominant that you start to intimidate or alienate your workers.

Self-aware leaders can identify their own flaws, which helps them identify the same in others. Accepting and acknowledging your own flaws will not only make you appear more confident, but it also helps you relate to your employees.

“A lack of self-awareness will make it nearly impossible for one to improve their leadership behaviors and impact on their team. Leaders who demonstrate high self-awareness are comfortable with themselves, which means they recognize their flaws yet remain confident in what they bring to the table,” says Haynie.

Emotional intelligence and self-awareness might feel like modern buzzwords, but the concept has existed for decades. In fact, there’s a commonly quoted statistic from a — now out of print — report published in 1918 by the Carnegie Foundation stating that “85 percent of a person’s job success is a product of interpersonal skills and only 15 percent of his success is the result of technical knowledge.”

While it’s been almost 100 years since that report was released, the CPI results suggest a similar idea — emotionally intelligent leaders bring something different to the table than leaders who just demonstrate a high IQ.

There’s a common theme throughout all of these traits — balance. Flexibility and agility are key traits for any leader navigating today’s constantly evolving workplace — flexibility shows that you can accept change and keep an open mind.

“Being able to inflict change within an organization requires flexibility, the willingness to try new ideas and the tolerance to be comfortable with ambiguity when things don’t work out as expected,” says Hainey.

Alternatively, if you become too flexible as a leader, you might be seen as a flaky or someone who “bounces from task to task,” says Haynie. If you say yes to everything, you’ll find yourself juggling multiple projects — rather than focusing on just one or two projects that you can devote your attention to.

Just like self-awareness is a key trait for any leader, so is the ability to remain insightful. It’s yet another trait that the CPI associates with successful CIOs. Insightful leaders can better relate to employees because they simply have an easier time understanding them.

“Insightfulness indicates one’s level of natural curiosity about what makes people ‘tick’ and why people do the things they do. A CIO who can demonstrate insightfulness will have a better understanding of what motivates their team and often realize that those motivators are very complicated,” she says.

Insightful leaders are not only better at navigating the “people” aspect of leadership, it can also help increase profits. A report from Gallup suggests that leaders who focused on identifying and building up strengths in both employees and the company reported a 14 to 29 percent increase in profit and anywhere from a 9 to 15 percent increase in employee engagement.

As a leader, do you follow the rules? Or do you find yourself bending and breaking set guidelines? The answer is that you want to do a little of both — teetering between staying in the lines and pushing boundaries.

“It is desirable to fall somewhere in the middle of the two poles; knowing when to comply and when to push back against organizational ideas but also — having the courage to question the way things are, which can help to inspire others to follow,” says Hainey.

Following the rules too closely can indicate that you’re a leader who “avoids risk” and operates “by-the-book.” But a leader who constantly breaks and disregards rules can “indicate an issue with authority.” Leaders who can find a balance are usually more innovative — breaking tradition to improve the company, while still maintaining the status-quo.

The higher you move up in a company, the more people turn to you for guidance, but you need to maintain the collaboration and feedback too. Otherwise you risk creating too much distance between you and your team. In order for CIOs to be successful they need to properly exercise independence as a leadership trait, be resourceful and always stay collaborative.

“Too much independence may lead to a siloed working environment, which can cause leaders to miss opportunities and the chance to share information. Showing little independence as a leader is never good as it may indicate a lack of tenacity and the tendency to quit when they run into trouble,” says Haynie.

No two IT leaders will be the same, but the common theme that all successful CIOs share are an ability to tap into these seven leadership traits. Whether you have a few traits to work on — one thing is key, and that’s to find the right balance that works for you and your company.