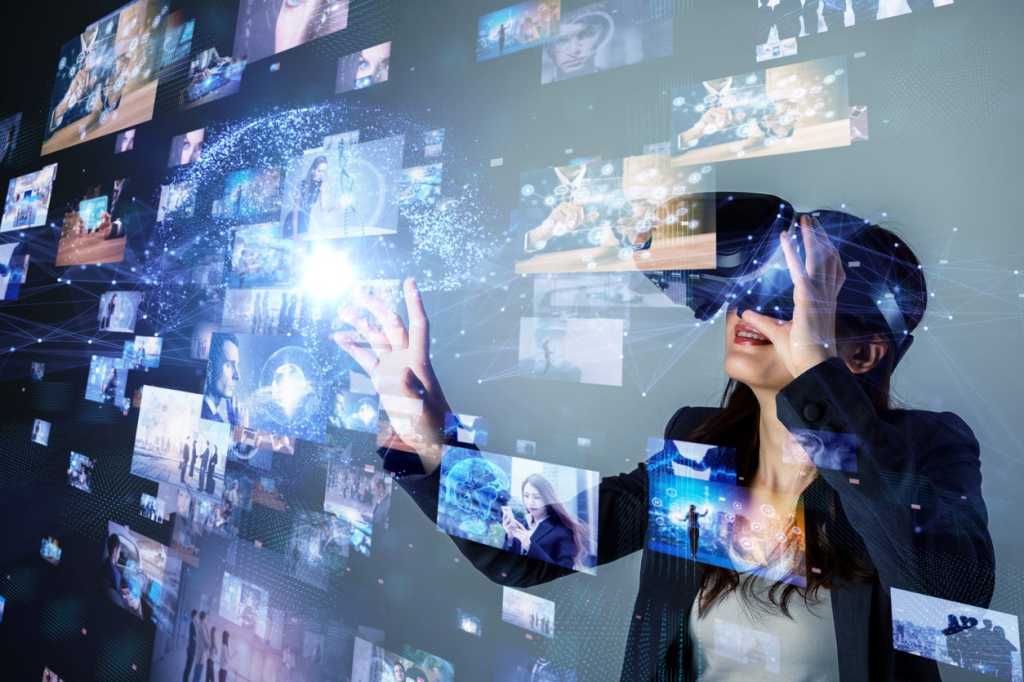 Welcome, time traveler, to the year 2025, where the 4th Industrial Revolution (4IR) is in full swing. Here, put on this virtual reality headset and in the next few minutes we’ll take you on a little tour to give you a flavor of how far we’ve come in the last 5 years and the business benefits we’re realizing.

You’ll see the headset you’re wearing, or something like it, in all sorts of places. You probably already know retail stores have been using virtual or augmented technology for quite some time in their stores, to let customers virtually try on clothes, for example. Well now the technology is online, because physically going to the store is so 2022. So, from the comfort of your home, you can don a headset and see how that blouse, or those slacks look on you. And retailers have perfected the art of using artificial intelligence to predict what you’re going to like so it probably won’t take long to find just the right item.

Similar technology is allowing banks to recreate those bustling trading floors that went away with the global pandemic of 2020, even though traders are safe at home. Traders can now virtually see each other and take advantage of AI-driven platforms that put more intelligence behind their data sources.

AR/VR is also recreating education. Traditional K-12 and higher ed institutions no longer have to rely on students being in classrooms to learn, and the technology puts far more effective tools at their disposal, enabling a more “hands-on” approach to education. The same goes for employers, who routinely use AR/VR tools to far more easily and effectively train their employees.

Wearables are also everywhere in manufacturing now. They provide workers with contextual instructions and information to help them perform their jobs more quickly and accurately. Perhaps you remember the early examples of this, such as at Airbus which used it to help workers build cabin seats for airplanes. It improved productivity 500% and reduced the error rate to zero.

Fulfilling a 2020 IDC prediction, exoskeletons are now quite common in warehouses, construction sites, military bases, oil and gas platforms and elsewhere. In addition to enabling workers to effortlessly lift up to 200 pounds, they’re also integrated with AI and collaboration tools to greatly increase productivity and efficiency while improving safety and reducing the risk of injury.

We’re seeing steady advances in autonomous systems, as well. While autonomous cars aren’t yet common, the technology is taking hold in areas far from highways, such as in the mining industry. Entire systems – from drilling, blasting, loading and trucking – are now autonomous, driving production costs way down and improving productivity as much as 30%. And, just as the World Economic Forum predicted, the technology has prevented thousands of injuries.

Companies can devise such systems using digital twin technology, which enables you to digitize objects, buildings or processes. Then you can test various scenarios against the digital twin to gain accurate predictions of outcomes. It saves vast amounts of time and money vs. testing similar what-if scenarios in the real world.

Tech Skills and a Platform Approach

One challenge we’ve encountered is the ability for IT groups to keep up with the pace of change. It requires expertise in all the technologies that go into 4IR, ranging from AI and AR/VR to robotics, edge computing and more. The organizations having the most success are those making investments in training their IT groups.

“We want to provide a platform that allows customers to not only manage the applications through a cloud-like environment, but we’re also integrating networking and security into that environment,” said Andrew Dugan, CTO for Lumen Technologies, way back in 2020.

Partnering with vendors that supply important pieces of the required infrastructure is also more important than ever, such as platforms that bridge network, data center, cloud and edge computing with managed services, including security.

You’ll see why in our next installment as we set the time machine for 2030 and see how robotics have taken hold, healthcare providers can essentially predict the future, and farmers take great advantage of the Internet of Things.