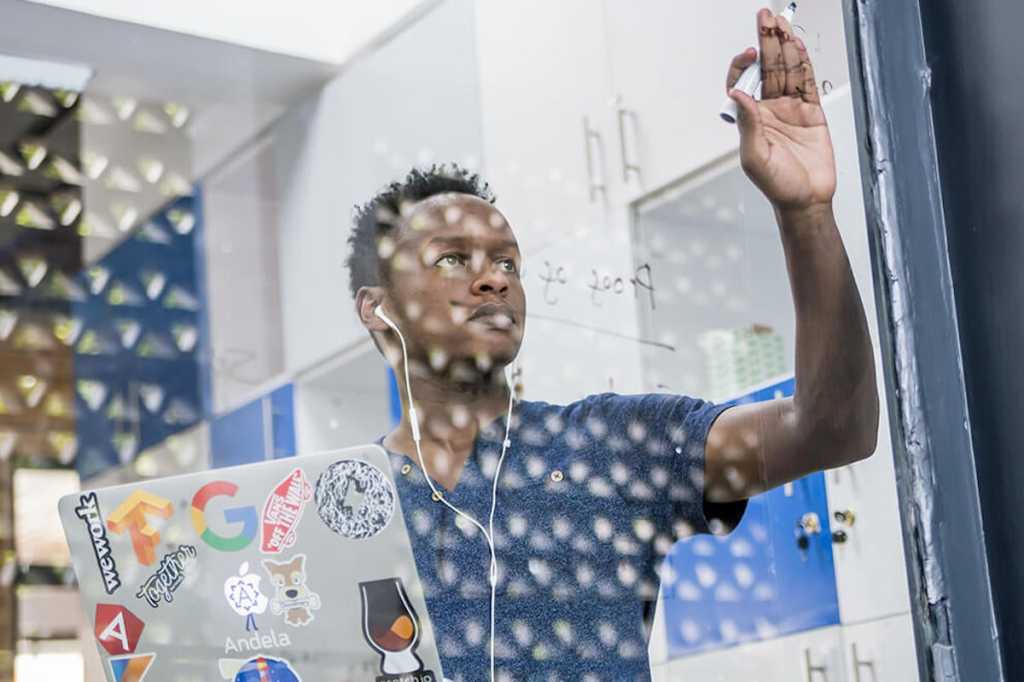 Tech talent company Andela has gone through wrenching change over the past year, not only due to the pandemic but also because it’s evolving from its initial incarnation as a company that hired and trained raw recruits, to a platform that connects remote-working, experienced contractors to software development jobs with major companies around the world.

The company, formed in 2014, is backed by an all-star cast of investors including Mark Zuckerberg and is one of the most internationally recognized African startups. It’s also one of the most globally prominent impact sourcers — outsourcing organizations whose business model is based on placing people from low-employment or developing economies with jobs for businesses internationally.

The coronavirus has forced most enterprises to go remote temporarily, but Andela has made the decision to go remote from now on, and has closed its facilities in Africa. In addition, it is moving to a contractor system.

At the moment just about 30 of its 750 developers are contractors but about 65% of the full-time employee engineers have requested to convert to contractor status and that conversion will take place on November 1, the company says.

The company had 1,575 programmers on staff before its first big round of layoffs, in September 2019, which eliminated junior developer positions. Subsequent layoffs followed, and last month the company placed 150 developers into its Talent Network on  unpaid status, to be  placed on future engagement as contractors. The company no longer employs engineers in training.

Andela has said that the reason for the change was that their customers were looking for more senior talent, junior positions were filled, and that it was having trouble placing less-experienced developers.

CIO Africa talked to Blair about his role — and the role of IT — in helping the company manage this change. An edited transcript follows:

What are your duties as CTO?

I’m really responsible for technology at large. I’m responsible for building core IP where we need specialization. We have a product we call MyAndela, which is really our database of engineers with intelligent matching algorithms, and we will start to build that out and scale it.

Can we drill down into some of the tech that you use?

Google is one of our investors so we run on Google’s Cloud Platform and we use App Engine quite a bit to power a bunch of services that we take advantage of.

In the early days we were very much a learning company doing training. There’s a lot of generic learning management systems out there and they weren’t purpose-built for engineers so I spent a lot of time focused on that problem but as we’ve evolved and really become a platform for matching talent with jobs and opportunities, we’re trying to capture a lot of information about engineers and then match them to our customer requirements.

One of the things you get as a buyer of contracting services is a timesheet and the timesheet meant nothing to me because it just said, 40 hours every week and all it did was generate a P.O. (purchase order). But we’re doing interesting things around giving engineers a voice. The Developer Self Checkin (application) is really asking how are you doing as engineers? Are you blocked, what problems do you see? It’s really meant to see how the engineer is doing so that we can react to any problems they may be having. That’s an example of building a remote first tool that’s core IP. Remote engineers don’t go in to the office every day and see everyone and have all that rapport and so we need to give them a better voice.

Another piece of technology we’ve built as a coaching tool is what we call the Developer Performance Report and it’s meant to do two things. It’s meant to give visibility of work getting done to our customers so rather than just getting  that 40-hour timesheet you get a report saying, this is the code that the developer pushed, this is how many commits they made to the database, the type of code. But the other reason to do it is to give our engineers a coaching tool — what happened, why weren’t there any commits this week? Maybe they were stuck on a problem, and we can have some engagement around that.

We’re moving in that direction. We still employ engineers as full-time employees at Andela, and we’re giving our engineers optionality to move to a contractor model where you set up your own entity, you’ll be able to take home more money because you control the expenses and the taxes. It takes a lot of the operational burden off of us but the big driver for us to move to a contract model is really finding more talent for our customers. Our customers are saying we need more skills, more types of skills, newer technologies or other technologies, and we need more senior engineers. If you work backward from that it says, hey Andela, you need to find additional supply, you need to move into other countries in Africa, to move into other geographies to find that talent. A contractor model allows us to expand much more quickly.

We moved into Egypt when I joined Andela and it took six months to figure out how to get all the systems in place to pay engineers and you can’t move that slow today. By moving to a contractor model you can set up a contractor with the right contract that complies with local laws literally in days versus setting up an entity that takes six months.

Did the decision to go remote coincide with the pandemic — or did it speed it up?

It was definitely an accelerant. We’ve invested a lot in physical infrastructure and when the pandemic happened, we figured we could make it work and then we realized we had no idea when the pandemic would end and so we said, this is a real opportunity for us if you think about what we’re trying to solve for. A remote experience where you don’t have to come to our centres, you don’t have to come to our physical buildings, would allow us to find more talent more quickly. We were already doing a lot of remote because that’s the way our engineers support their customers – if an engineer from Lagos was on a job in San Francisco they didn’t move to san Francisco, so we’ve been working remote for a long time and learned what best practice is.

The pandemic just accelerated the idea of, we don’t need centres anymore.  It sort of pushed us over the edge.

There was also something else that was happening, and that was Andela as a business was shifting from this idea of a training organization that offered these in-person bootcamps. We starting to go through this idea of Andela’s becoming a platform that connects talent with opportunity. When we were a training organization those facilities were very valuable because they brought together (people) to learn the vocation of software engineering but as we started to evolve we said we need to become  much more of this platform connecting opportunity with talent.

People may have already trained as an engineer, but now we can grow that. Here would be an example: An engineer would work at a bank at the central business district of Nairobi, go to a small branch, probably have an engineering team of five people and their entire world was Nairobi, in terms of job prospects. Now, they play on the world stage

You’ve had remote experience, but have there been new challenges during the pandemic that you’ve had to overcome?

Yes, definitely — I would say a challenge is that no one is traveling. Remote teams still have to come together for high-bandwidth conversations. We used to have in-person design reviews. Now what we’ve done is use tools like Loom, a video-sharing tool where the designer  will record  the (user) experience and thoughts that were in their head and why they made the decisions they made and then present it to the team and then we’ll come together and drive feedback on it.

Another challenge with no travel is just working on team chemistry: you don’t have the water cooler conversations anymore.  So we do a lot more to just bring people together  to talk about life or to play games and we have to be intentional about that whereas it used to be much more serendipitous when you’re in person.

Do you have overall tips for people who manage teams but who may be new to the new, remote reality?

When it comes to tools and technology to support the remote environment, pick a core set, like maybe Confluence is your Wiki and Slack is your messaging tool, maybe Microsoft Teams, but then be willing to listen and evolve. We learned about Loom because one of our designers brought it into us.

We’ve been experimenting with ways to thank people and do recognition. Someone said, hey let’s  do a kudo board and people were like, what’s a Kudo board ? It’s actually a thing you can go do, you write appreciation notes, when people leave or if they did something special.

And I think everyone has gained an appreciation for this but it was a real challenge: just being empathetic to the remote worker. When you get photobombed by your 8 year old kid, that was viewed as a negative thing before and it was because people didn’t have a lot of empathy, but that has changed I would say.