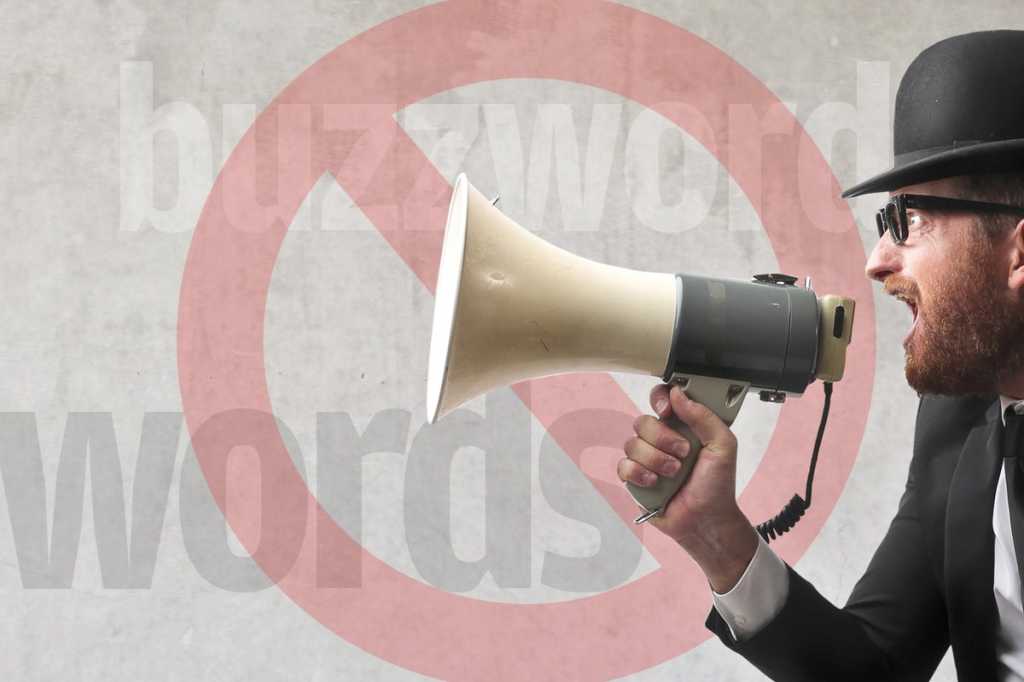 Every profession has its own collection of abbreviations, acronyms, catchphrases, and jargon that serve as shorthand for their techniques and tools. IT is no different.

Yet, unlike other disciplines, the language of IT tends to spill out across the enterprise and society itself. There are ads praising cloud computing and data-driven decision-making. People routinely praise their latest apps, compare user experiences, and chat about downloads and deployments. But honestly, when was the last time anyone (outside of finance) shared their thoughts on amortization or asset allocation?

But they don’t always get the terminology right. Or they co-opt phrases. Or overuse them. Often to the point where they’re confusing or irritating or have lost their true meaning. With that in mind, CIO.com polled a collection of tech leaders to get their ideas. Here are 15 of the most often misused buzzwords they’ve encountered in IT.

Digital transformation tops the list as the most misused buzzword, cited by more sources than any other. That shouldn’t surprise anyone in IT — or business in general — as nearly any change (big or small) seems to now be labeled transformative.

“This has become a very overused term, used very broadly to seemingly apply to implementing any digital capability,” says Ryan Smith, CIO of Intermountain Healthcare. “The term should really be used to refer to the convergence of digital technologies — e.g., convergence of mobile, cloud, data, and devices — to substantially change/disrupt a traditional business process that either blends digital and physical experiences or offer a pure digital alternative to a traditional.”

Strategic also deserves a spot on this list, says George Westerman, senior lecturer at the MIT Sloan School of Management and CIO award co-chair of the MIT Sloan CIO Symposium.

He says people mistakenly think they’re strategic simply because they have a business goal, work toward a specific objective, or — in the case of the CIO —report to the CEO.

“Strategic is one of those things we all want to be, but if you’re being really strategic you know where you’re going and have a plan to get there even if you’re doing some pivoting along the way,” he adds.

People today not only want to be strategic; they like to think they’re agile, too. But confusion can arise in the office as workers and IT teams in particular talk about being agile. Are they talking about being adaptable? Or about developing software following the Agile methodology?

Jim A. Jorstad, interim CIO at the University of Wisconsin-La Crosse, says he has heard people apply agile to a range of concepts, although he advocates for the business and IT to have more adherence to the use of the term when speaking specifically about the development methodology.

“It’s not just about flexibility and adaptable or quick to change. Agile is more specific than that,” he says. “It’s a work methodology, but I don’t think people really know that’s what it means.”

CIOs everywhere face a long list of requests, forcing them to get really good at prioritizing the most important projects. But the idea that they can or should manage others’ demands is a tall order — earning the term a spot on this list.

“There are many different stakeholders with many different needs that seem to change on a weekly basis. This constant change creates constant demand on the IT department. The notion that IT can manage demand is false; IT can simply manage its capacity,” says Susan Snedaker, CIO at El Rio Health and a member of the ISACA Emerging Trends Working Group.

The term bandwidth also gets a vote here, given its common misappropriation. As many technologists know, the word has a very technological meaning. But now it’s incorrectly used as a reference to available time.

“It’s for speed and capacity. It’s not about your time availability,” Jorstad protests. “It’s a word that distracts. So just say what you mean: ‘I don’t have time to work on this.’”

Several CIOs cited these terms as misnomers, noting that, first, all software has code (even if the users can do some light programming without actually having to code) and, second, enterprise software deployments still require IT work.

“This is one of the most loathsome buzz phrases I see used and misused. I am always annoyed when I read a solution vendor’s website claiming ‘no IT required,’” Snedaker says.

This is more than a linguistic issue, she says.

“Advertising ‘no IT required’ misleads organizations (and end users) and creates a potentially dangerous shadow IT path,” Snedaker explains. “While a vendor’s solution may not require heavy IT involvement, it always requires some IT involvement — from assessing the security of the solution (especially for organizations in regulated industries) to ensuring users are properly provisioned, and from ensuring corporate data is safe to ensuring data can be repatriated.”

She adds: “IT should always be at the table as a partner in facilitating the IT solutions approved by organizational leadership for use in conducting company business.”

Maybe people have put too much faith in the quasi science in the “Terminator” movies, or the term throws them off, but technology leaders list artificial intelligence and several related terms as their picks for most misunderstood buzzwords.

“The machine learning space is a great source for the current misused buzzword crop. Especially the overhype of the predictive power of trained models, even thoroughly trained models rarely give absolute answers, just statistically likely ones,” says Tammy Bilitzky, CIO of the Data Conversion Laboratory.

As Reinvestment Fund’s interim head of IT, Barry Porozni gets lots of requests for a data warehouse — when, more correctly, it’s really the data that colleagues need.

“The term has become associated with anything data. It took on a life of its own. So we hear, ‘We need a data warehouse,’ when what they really need is access to data,” Porozni says.

Thankfully, he adds, the misuse of the term seems to be mostly among non-IT workers and the IT team typically teases out what their colleagues are really after.

Porozni isn’t the only one calling out the misuse of data terms. Bilitzky, likewise, adds big data, data mining, and actionable analytics to the list, saying that there remains some misunderstanding of what they mean and what they actually deliver.

“This trio of words I still hear used all the time, often layered with the AI and ML buzzwords,” she says. “The implication is that these have evolved to be push-button capabilities, but that is still not the case. It is true that with extendable cloud-based processing power and data conversion capabilities, almost all companies of significant size have already implemented systems around big data. Organizations increasingly recognize the value of their data and the challenges associated with effectively collecting and harmonizing it from diverse and often obscure sources. But it’s not smooth sailing from that point forward. Despite all the analytics products in the marketplace, actionable analytics still entails subject matter expertise and human intelligence to understand and interpret the data with all its nuances, verify conclusions, and accurately identify the problem areas in a clear manner that leads to viable planning.”

Staying with the technical theme here, Bilitzky calls out microservices, too.

“Microservices is an architectural style that embraces a loosely coupled group of services each of which should be easy to test and independent of each other and expose a minimum of functionality. Instead, it has come to mean any system that uses more than one web service call,” she says.

On a similar note, Ken Piddington, vice president and CIO of U.S. Silica, calls out the misuse of the term multicloud. He goes with what he calls the “truest definition,” which is when “you have architected a single system with multiple cloud components from different cloud providers or services.”

Yet many people think multicloud describes an enterprise that has a mix of cloud vendors and software-as-a-service offerings.

“We see more businesspeople get it wrong, but also some tech people, too,” he says. “I don’t think it’s the end of the world using this one wrong, but it’s always bothered me. But then once you understand it, you can have a better conversation about the challenges of it and the reasons to go for it.”

12. IS vs. IT (and other tech terms with slight variations in meaning)

Isaiah Nathaniel, vice president and CIO of Delaware Valley Community Health, cites the misuse of IS and IT as slightly problematic and annoying. He says information systems and information technology are often used interchangeably even though they’re not the same. Going again with the truest definition, IS traditionally applies to the technology, people, and processes — making it broader than the technology-focused moniker that is IT.

Nathaniel also calls out the interchangeable misuse of telehealth and telemedicine, as telehealth encompasses a broader range of remote services than telemedicine.

Although such distinctions might seem trivial, Nathaniel says he likes to call them out. “It’s a good trivia night thing,” he says, acknowledging, too, that misalignment on the scope of certain terms — whether these or others — can sometimes hinder business and strategic discussions.

Piddington says he’s come to see that many people like to label any technology that’s new to their enterprise (or simply new to their vocabulary) as emerging tech when in many cases they’re quite mature. He puts AI, RPA, and IoT in this camp.

There’s a whole bunch of terms, technologies, and concepts that can be grouped in this category. They include metaverse, blockchain, crypto, digital twins, and NFTs. As Ram Palaniappan, CTO of TEKsystems, explains, the metaverse is “all about creating an equivalent in a virtual world” yet he and others say many people still struggle to get their heads around this idea.

This is another term criticized for both its overuse and its lack of any real meaning.

“In my 20-plus years in technology we have experienced a number of events that accelerated change: the dot.com crash in 2001, the financial crisis of 2008, and the recent pandemic,” says Dan O’Brien, senior vice president of solutions engineering at tech company Presidio. “I’ve come to the realization that change is constant, often for the better, and in fact it’s actually normal. It’s when technology is no longer at the heart of enabling change in our lives and experiences that I will be worried and afraid to admit of a world that is a new normal.”