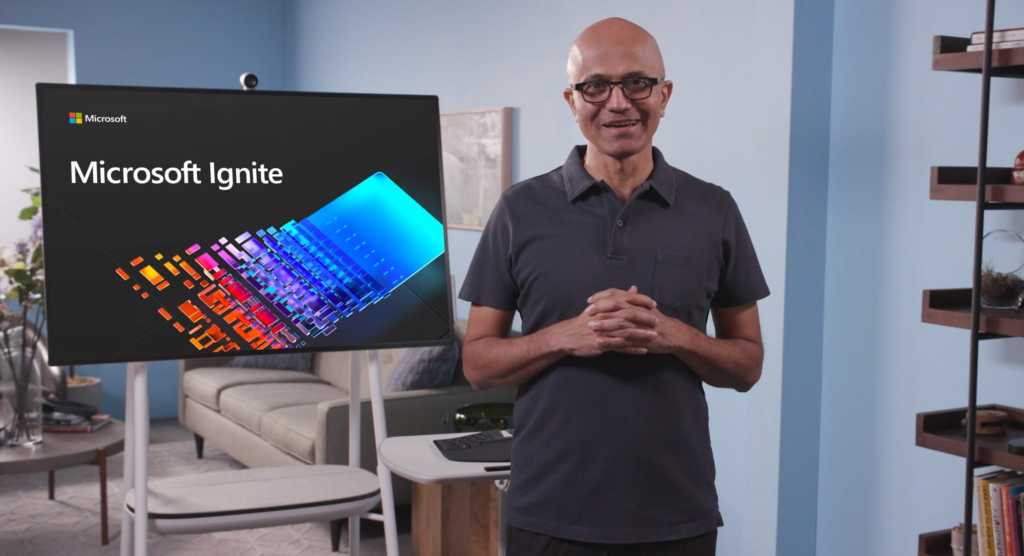 Microsoft kicked off its 2021 Ignite customer conference on March 2 with some stunning demonstrations of Mesh, a mixed-reality working environment like Second Life on steroids, accessible to anyone with a $3,500 Hololens 2 headset and high-speed internet.

Out of the spotlight, though, there were other innovations — in Microsoft Azure, Teams, and Power Platform — more likely to help the majority of CIOs deliver computing, collaboration, and coding tools to a workforce that is still socially isolated and increasingly socially divided as a result of the pandemic.

Here are 10 key Ignite takeaways for CIOs that caught our attention.

Semantic search as a service

Do what I want, not what I said: OK, that may be a slight exaggeration, but that’s where Microsoft is going with the new semantic search capability it’s offering developers a preview of. An addition to its Azure Cognitive Search APIs, semantic search promises to deliver results based on user intent rather than on the keywords they used, thanks to a natural-language model that Microsoft has built.

Models like this will be hugely valuable — but also hugely resource-intensive, said Nick McQuire, chief of enterprise research at analyst firm CCS Insight. “Many businesses won’t be able to build this for themselves,” he says, so Microsoft offering developers semantic search as a service that they can integrate into their own applications is significant.

Microsoft is also offering enterprises a new connector to enable Azure Cognitive Search to ingest and explore their SharePoint content.

Other Azure developer APIs are getting upgrades too. Form Recognizer 2.1 can already find data in scanned receipts to process expenses. From March 15 it will gain the ability to extract individual line items from invoices, simplifying payment processing.

Form Recognizer has also learned to extract names, expiry dates, and document numbers from US driving licenses and passports from around the world, a boon for customer onboarding — or controlling borders.

Mission-critical computing in the cloud

Machine learning where you want it

When it comes to training or running machine learning models, hyperscalers like Microsoft have traditionally offered CIOs one answer: Do it in our cloud. Now, though, with its hybrid cloud control plane, Azure Arc, Microsoft is offering enterprises a way to run ML workloads on premises, in a multicloud environment, or at the network edge.

“What is new about Arc and the integrations with Azure ML is, Microsoft is saying you can use your existing infrastructure,” said CCS’s McQuire.

At the other end of the machine learning scale there’s also Azure Percept, a set of pre-built AI models, development tools, and reference hardware for building cloud-connected low-power AI systems with cameras and audio capabilities on the network edge. It’s based on a Zero Trust security model and offers zero-touch WiFi provisioning.

Microsoft’s industry clouds offer automation and analytics tools tailored to specific vertical markets — initially telecommunications, retail, and healthcare. At Ignite, it expanded its healthcare cloud feature set and language coverage, and introduced three new industry clouds, for financial services, manufacturing, and nonprofits. If you’re in one of these sectors, you may find Microsoft has already done some of your development work for you.

Microsoft CEO Satya Nadella is clearly hoping CIOs will pay more attention to the way Teams is used in their organizations, saying the company is building it as “an organizing layer for all the ways we work.”

A new feature, Teams Connect, will soon enable enterprises to create and manage channels shared with customers, suppliers, and other partners in which they can co-author documents and collaborate in apps. There will also be an expanded role for Microsoft Viva: In addition to delivering corporate internet and training functions, it will bring Teams users the same well-being and productivity insights familiar to users of Outlook, and for an additional fee, Viva Topics will make documents and expertise more easily searchable across the enterprise from within Teams.

With hundreds of different applications tied into the Teams environment, CCS Insight’s McQuire said, “The risks are that it becomes this massively unwieldy thing, and the user experience gets confusing because there are too many different things going on.”

Neverthless, he said, the new features will be attractive to companies that want to consolidate the number of conferencing tools they have.

By midyear, enterprises will also be able to control in which datacenter Microsoft stores documents shared through Teams, group by group or even for individual users, making it more useful in some regulated industries or where there are concerns about the security of data. These controls will mirror those available for Exchange and SharePoint. There will also be an option to make end-to-end-encrypted one-to-one voice or video calls, that CIOs can enable on a per-employee basis, and to limit meeting attendance only to invited participants. A future update could see the addition of end-to-end encrypted meetings, too.

For companies that are centralizing their investment in such collaboration, McQuire said, “Security is arguably the number one selection criterion.”

Microsoft is adding new options to embed PowerPoint presentations right in Teams, where meeting participants can flip back and forth through a slide deck at their own pace. Presenters will have new options to position their video image in front of or beside their slides, and to place the gallery of meeting participants at the top of the screen, right under their camera, to improve eye-contact.

“The thing that really stood out is the whole focus on presenter tools,” said McQuire.

Yet another low-code development platform

As if there weren’t already enough low-code development platforms out there, Microsoft is adding its take on the genre, and it’s based on Excel formulas. Power Fx is used to build canvas apps in Microsoft Power Apps, and is destined to become the language across the Power Platform. Microsoft said Excel users will be able to draw on their existing knowledge to develop apps with the simplicity of formulas — so if your company’s spreadsheets are all error free, you have nothing to fear.

There’s no getting away from it, Microsoft’s demonstrations of Mesh, a mixed-reality collaborative environment, were eye-catching, from the undersea scene created collaboratively with the audience to the Cirque-du-Soleil finale.

While there were glimpses along the way of a couple of industrial applications built using underlying components of Mesh, Azure Remote Rendering and Azure Object Anchors, CIOs were left with a lot of questions about how they would actually use Mesh in their organizations.

Among them, said McQuire, are, “How is Mesh going to help businesses improve their productivity?” and “How will the licensing and the costings work?”

He also called out bandwidth as a potential concern.

That will make life difficult for many remote users connecting over DSL, and require sophisticated wireless coverage in crowded workspaces, if we ever return to those.

While Microsoft’s goal is one day to deliver the impression that distant coworkers are virtually present, early Mesh users will have to work alongside cartoon-like avatars of their colleagues provided by AltspaceVR as a way to limit the computing and bandwidth demands of mixed-reality collaboration.