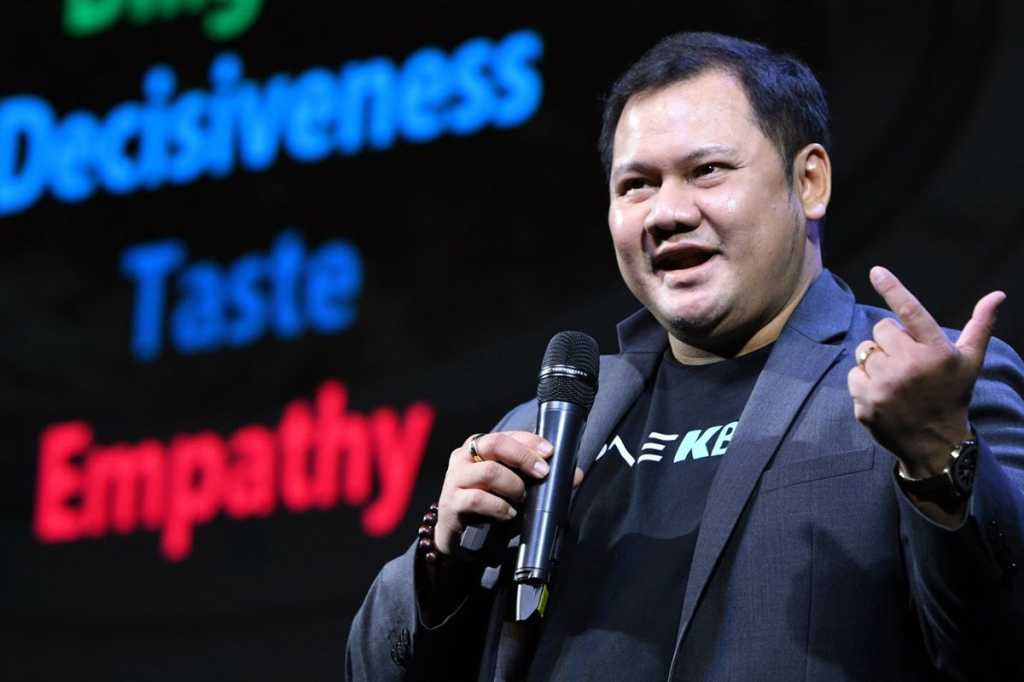 Ask Krating Poonpol to summarise business appetite for postpandemic transformation across Thailand and the iconic industry figure—viewed by many as the ‘startup godfather’—will serve up his infectious smile and customary positivity.

Yet don’t mistake such positivity for naïveté, as his is arguably one of the most qualified opinions in the country, evident by a standout career in Bangkok and Silicon Valley, balanced between entrepreneurship and the enterprise.

Spearheading investment in more than 70 startups, Krating founded 500 TukTuks, a venture capital fund targeting local and emerging businesses across Southeast Asia. This is in addition to launching Disrupt Technology Ventures, a startup education program and venture builder in Thailand.

On the enterprise side, following time driving Google Earth awareness in San Francisco, the industry executive returned home to kickstart innovation at Dtac, the second largest mobile operator in Thailand. Today, Krating serves as president of technology at Kasikorn Bank (KBank), overseeing a department housing more than 2,500 employees as one of the largest dedicated technology companies within the country.

“Every CIO and technology leader in Thailand wants to accelerate the pace of innovation because COVID-19 has increased digital adoption,” Krating observed. “Apart from travel, every sector has embraced digital. That even includes insurance tech, which the market felt would take another two years to do but in less than a month, 7 million policies were bought online and via mobile. For a product as complex as insurance policy, this represents huge uptake.”

According to Kasikorn Research Center findings, the Thai economy is forecast to grow 2.6% in 2021, with the market rebound bolstered by government spending in both consumption and investment segments.

Despite the ongoing challenges linked to a potential third wave of COVID-19 infections, from a technology standpoint at least 61% of Thailand’s GDP is expected to be digitalised by 2022, resulting in US$72 billion in IT-related spending.

As noted by IDC, 70% of the country’s new applications will feature microservices architectures that improve the ability to design, debug, update, and leverage third-party code, with 25% of all production apps predicted to be cloud-native.

How KBank is innovating at speed

Within this context, KBank is setting a new pace for technological innovation across financial services, underpinned by a digital-first strategy and Southeast Asia expansion plans.

Spearheading such efforts is Krating as leader of Kasikorn Business-Technology Group (KBTG), which manages more than 400 applications for KBank, including the flagship mobile banking application K Plus—ranked as the No. 1 finance application in Thailand on iOS and Android, serving more than 14 million customers on a 24/7 basis.

Upon assuming office in January 2019, Krating set out a bold mission for his division to become the leading technology specialist in Southeast Asia, driving Thailand to become one of the world’s standout technology hubs by 2022.

To achieve this, Krating launched the KBTG 6-Track Strategy, crystallising the company’s focus on breakthrough innovation, architecture modernisation, and infrastructure modernisation. This is in addition to scaling agile, devsecops, and test automation, embracing strategic and dynamic processes, and creating a OneKBTG culture capable of recruiting leading local technology talents.

“We launched six new regional products during 2020 and, despite the ongoing challenges, we’ll be even more aggressive in 2021,” Krating said. “We continue to place innovation at the core of everything we do. Our aim is to always be one or many more steps ahead of the game, pushing the envelope across Thailand and the wider region.”

As well as customer-facing transformation, Krating has also driven social innovations such as TagThai, working with the Thai government to create an online platform aimed at supporting local tourism at risk of disruption—garnering more than 150,000 downloads in the process. “We’re now at the point of talking about a record number of mobile banking transactions in Thailand every single day,” Krating said.

Furthermore, KBTG rolled out the CU Nex project, which digitalises the student experience for Chulalongkorn University, one of the largest public universities in Thailand, alongside partnering with the Stock Exchange of Thailand (SET) to create a new digital asset platform, placing Thailand on the global stage amid a blockchain revolution.

Most recently—and to branch out into the digital asset business—KBTG introduced Kubix, a spinoff company that will provide a system for digital token offerings in the primary market via blockchain.

Housed within such a long list of innovation, one of Krating’s most impactful initiatives has centred around the use of AI and machine learning to identify customers in need of credit, helping the bank improve the accuracy and conversion rates of push-based loan offering messages via mobile channels.

The bank’s traditional marketing analytics approach was batch-oriented, segment-based, and centred around monthly analytics that relied on human experts to create the correct target group to distribute loan offering messages.

Representing the first time that both KBTG and KBank successfully implemented AI and machine learning models at scale, the project resulted in a 40% improvement in conversion rates and an increase of loan bookings by several hundred million Thai baht (millions of US dollars) over 12 months.

A culture of experimentation

As a self-confessed lifelong learner, Krating continues to set an executive example to KBTG employees through a commitment to “never stop learning”, highlighted by personally completing advanced training on AI, machine learning, and devsecops.

Such efforts are supported by the KBTG Academy and a state-of-the-art KBTG Talents Center to drive employee training, backed by a boardroom mandate ensuring that employee skill capabilities—which are linked to the corporate career ladder—are increased by 0.5 annually. The ripple effect of placing employee upskilling at the heart company innovation plans is the creation of a culture built on experimentation and creativity.

“On the application development side, we’re using low-code and no-code to develop prototypes at speed while trying to implement an innovation runway involving core process and technology elements,” Krating said.

“As part of our rearchitecture plans, we’re also moving towards microservices, containers, and APIs,” he said. “This means we have smaller and more agile teams with our consumer finance division restructured to be more tribe-based and multifunctional. We’re connecting customer research and deployment to production to create a feedback loop capable of removing silos.”

Alongside moving away from omnichannel to provide a more consistent experience to customers, Krating set up decentralised finance labs to push experimentation in blockchain, while ramping up efforts to maximise the potential of facial recognition and biometrics.

“This process isn’t easy, but COVID-19 has offered us a reason to transform and accelerate change because if we don’t, our customers will die,” he said. “KBank represents 40% of Thailand’s financial transactions, and we are the No. 1 bank for [small and medium businesses], which is the backbone of the Thai economy.”

With the KBTG division pushing new projects through the organisation in an almost factory-like manner—such is the conveyor belt of innovative products flooding out to market—Krating was quick to emphasise that the foundational aims of the business have not changed: “We’re continually experimenting with a lot of technology, but at the core we’re increasing the pace of productivity and innovation,” he confirmed. “Every single CTO has this on the agenda, but return on investment is even more critical.”

Another key motivation for Krating and his team is aiding the execution of a regional expansion strategy as KBank looks outwards to grow beyond local borders. In attempting to become the first Thai bank to fully operate on a regional level, Krating established Kasikorn Vision Information Technology (KTech) in June 2020, a Shenzhen-based fintech subsidiary company prioritising the design, creation, and research of new technologies.

The Ktech launch coincided with expansion into Indonesia, Vietnam, Laos, Myanmar, and Cambodia in the form of local banks, joint ventures, and branches.