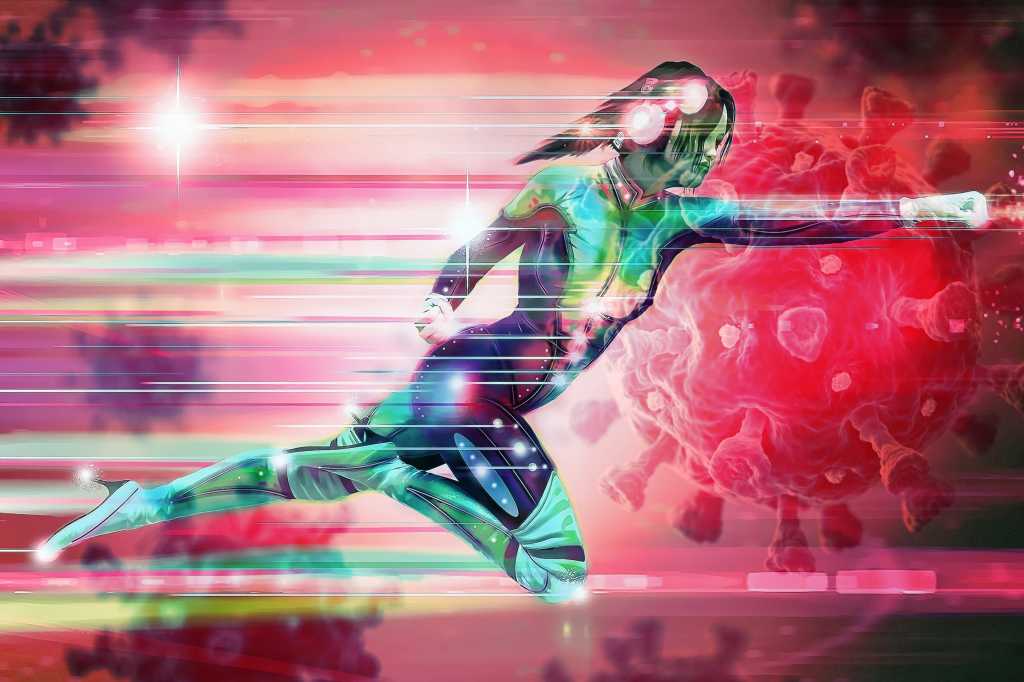 The COVID-19 crisis has impacted all of us in different ways. But for technology organizations around the world, it has represented both their greatest challenge and their shining hour.

“We went from a very small percentage of the world working virtually to practically everyone,” says Sam Ransbotham, a professor of information technology at Boston College’s Carroll School of Management. “I don’t mean to imply that’s it’s been perfect — I’m sure there have been lots of heroic efforts to keep things from collapsing we’re not hearing about. But so much of it is working well and it has scaled at an unprecedented pace. Kudos to our IT infrastructure.”

For some IT pros, however, dealing with the pandemic has involved a lot more than making sure everyone has laptops at home and can log in to their Zoom meetings.

Many have gone above and beyond the call of duty, donating their time and expertise to fight the virus and its ancillary effects. They’re making sure that people are able to see their doctors, even if they can’t visit them in person. They’re protecting hospital networks from a surge of COVID-related attacks. They’re repurposing existing platforms and building new tools to help those in need.

There are many IT heroes during this crisis. Here are just a few.

Every large enterprise has had to scramble to accommodate a remote workforce in response to COVID-19, but few did so as dramatically and efficiently as Intel.

When the lockdown order came on Thursday, March 19, the chipmaker already had a continuity plan in place that could handle roughly half of the company’s 100,000 employees operating remotely. Now it had exactly three days to get the other 50,000 ready before business resumed on Monday.

“It was all hands on deck for Intel’s global IT organization,” says Deskus, who had taken on the CIO role a month before the crisis hit. “Because our response had to match the pandemic’s pace, our teams across audio and video engineering, data collaboration, security and privacy, network, server, storage, operations and virtualization pulled together to accelerate our response.”

It helped that Intel has had a pandemic leadership team in place for nearly 20 years, and that much of its operations were already in the cloud, she adds. But it also took a willingness on the part of its executives to push the envelope and explore creative solutions to unprecedented challenges.

“People came together very quickly to solve problems, make fast decisions, and accept some unavoidable compromises, without drama or egos getting in the way,” she says. “Our top priorities have been to keep our employees safe and to deliver to our customers with minimal disruption. By transitioning so quickly to remote operations, we’ve been able to sustain an on-time delivery rate of better than 90 percent.”

Not surprisingly, many of the extraordinary efforts put forth by IT professionals this spring involved making healthcare services more widely available to people who needed them.

“When COVID hit, we understood instantly that there was lot of healthcare that wasn’t going to be deployed and a lot of patients who wouldn’t be able to see their doctors,” he says.

The company quickly pulled a huge chunk of IT resources away from existing projects and pivoted them toward extending the audio and video capabilities of its telehealth platform.

Normally it would take three to four months to fully develop, debug, pilot, and implement a HIPAA-compliant telemedicine system, says VP of Engineering Mihai Fonoage. Modernizing Medicine did it all in four weeks, assembling a team of 40 software engineers, UX specialists, mobile and back-end architects, and cloud service engineers who worked around the clock.

A lot of that time was spent working with healthcare providers to establish the right workflows for virtual visits — how to set up video calls, how patients would interact across different platforms, and so on.

At the same time, the company was transitioning all 800 of its employees to operate remotely. The organization’s IT team had to replace its internal phone system and implement a new webinar solution to allow the company to hold virtual meetings. They pulled that off in less than a week with no additional personnel, Edmondson adds.

“Our biggest challenge was building this in the time frame we had,” says Fonoage. “We literally worked days, nights, and weekends to get something out, but nobody complained about it. When you’re driven by such a meaningful goal, everything else becomes a blur.”

Attack of the virus scammers

In addition to its other damage, COVID-19 resulted in a spike in hack attacks. By the end of March, pandemic-related phishing attacks had already grown 600 percent, according to KnowBe4’s quarterly phishing report. By mid-April, Google was blocking 18 million malicious emails a day related to COVID.

“The problem is that COVID-19 has created fear and uncertainty among everybody,” says Satnam Narang, staff research engineer for security firm Tenable. “Scammers are seizing on fear and taking advantage of folks who are worried sick. We’ve seen this kind of thing before with natural disasters, but this crisis is global. It’s a phenomenal opportunity for scammers, and not in a good way.”

In addition to dealing with a surge of COVID patients, hospitals have forced to fend off massive new waves of attacks. Major breaches of healthcare networks were up 50 percent between February and May, according to the US Department of Health and Human Services.

Each day, the coalition aggregates data on tens of millions of potential attacks from multiple threat intelligence feeds, then shares that information via a free URL blocklist. These feeds are vetted by hundreds of volunteers for COVID-related threats.

“One of the biggest challenges we had was taking all these different feeds and turning them into one cohesive feed we could use to create our blocklist,” says Nick Espinosa, volunteer spokesperson for the CCTC and principal of his own firm, Security Fanatics. “Tens of thousands of organizations are now hitting us up for our information.”

Another ad-hoc coalition of white-hat security experts, the Cyberthreat Intelligence League, has shut down nearly 3,000 malicious sites and identified more than 2,000 vulnerabilities in the networks of major healthcare organizations.

Saxe says he didn’t intend to build a massive volunteer organization, but it quickly evolved into one.

“I was only looking to create an informal Slack space for threat researchers to collaborate and share information,” he says. “Then I realized we had the volunteer firepower to build actual threat intelligence services for the global IT security community. As a team, we built an organizational structure, a technical infrastructure, a social media and web presence, and a set of practices around publishing blocklists and threat advisories that allowed the effort to become truly useful to network defenders.”

DigitalOcean, an infrastructure as a service platform for developers, has been making its resources available to devs who want to put their coding skills to work fighting the virus and mitigating its effects.

Some of the more notable projects include:

Many of the projects in the Hub have potential to continue after the current crisis has passed, says Hollie Haggans, global community hub lead.

“A lot of the developers have built really amazing tools that can be applied to other areas of technology and different verticals,” she says. “We anticipate many of them to be repurposed to help serve the broader community.”

In June Digital Ocean announced it was expanding its Hub for Good to include projects aiming to fight inequality and promote sustainable economic growth, donating up to $500,000 in infrastructure credits to these projects.

From cars to community

When the crisis took hold, the automobile industry hit an immediate roadblock. Car makers shut down their assembly lines. Dealerships closed their doors. Fleets of cars scheduled for import or export were stranded at the docks.

“We went from shipping 35,000 vehicles in one week to 2,500 the next,” says Hicks. “We quickly realized that in another week we’d find ourselves twiddling our thumbs. That’s when we got the idea to transition our services to use during the pandemic.”

Within four days, CDN had created a new version of its mobile app, called Reach. Instead of using the app to match dealers with drivers who could deliver truckloads of cars, CDN was using it to match people in need with volunteers ready to help.

Car Delivery Network had morphed into Community Delivery Network, helping to provide food, medicine, and other services in more than 30 communities across the US, UK, New Zealand, and Australia.

To make sure its back-end services could scale to meet potential demand, CDN turned to its hosting provider, Rackspace Technology. In March, Rackspace announced it was donating $10 million in OpenStack Public Cloud hosting resources to organizations helping out with COVID-19 relief efforts.

“CDN came to us and said, ‘We have this great idea, but we need compute power,'” says Josh Prewitt, general manager for Rackspace and vice president of its OpenStack Public Cloud. “We said, ‘We have that; we can help.'”

Rackspace set up a mirror environment to what CDN already had in its private cloud, but with the ability to burst and scale as needed, says Prewitt.

“Instead of CDN having to rack and stack new gear, we could simply say, ‘If you need more resources, we’ll just dial them up.'”

Hicks says CDN is likely to continue to support Reach after the pandemic has subsided. He’s been talking to churches and universities about how to use the app to organize volunteers, track community service hours, and provide help for local businesses.

“The more conversations we have about this, the more we realize we can do,” he says. “There’s so much more that can be done with matching somebody who has a need with someone who can provide help.”