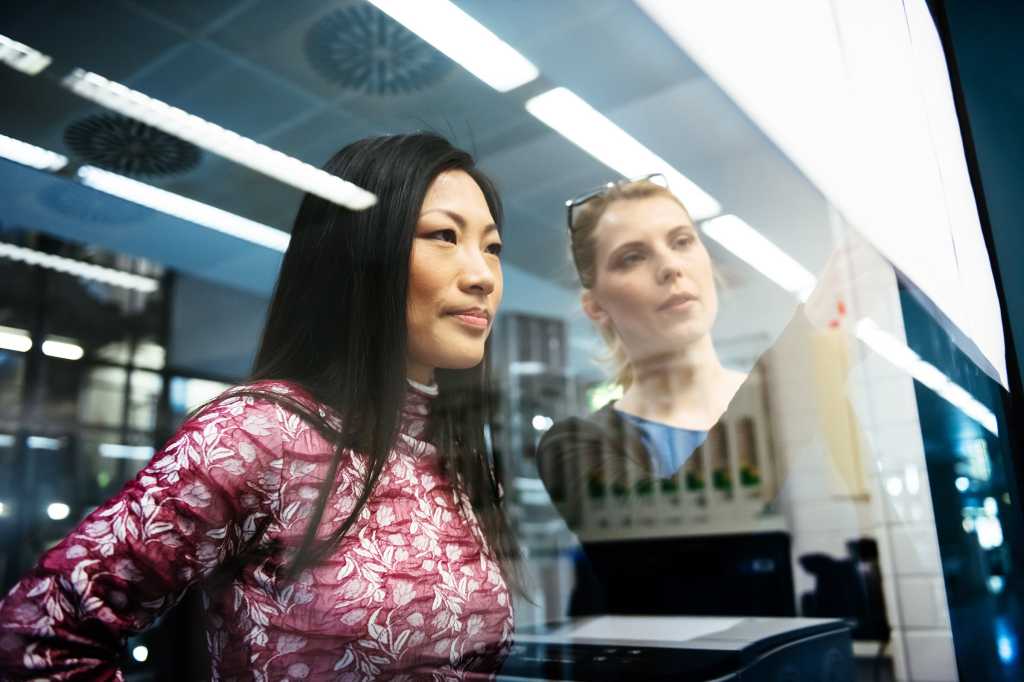 The meeting went south almost as soon as it started. A company was moving from a service-driven to product-driven business model and adopting an agile approach at the same time. Al Sporer, executive vice president and general manager for digital consultancy Anexinet, was there to facilitate. Less than five minutes in, a longtime general manager from the business looked across the table at the CIO. “I don’t know why I have to be here,” she said. “I’ve told you for over a year that we need a new digital customer interface. You can’t get anything done!” Furious, the CIO got up and walked out of the room.

Sporer and his team continued the meeting, although they knew that with the CIO absent, little progress would be made. When Sporer talked to the CIO afterward, “He was still so angry he could barely speak.” He’d heard that same accusation from that same manager many times before. For six months, the CIO and his team had been asking for requirements so that they could start work. “The business leader always turned the conversation around and said, ‘You guys are the tech experts, you should know what we need!’ It had turned into a standoff,” Sporer says.

With some calmer dialogue, reaching agreement might not have been that difficult. The business user just wanted IT to update the front end and create a modern customer interface, but because this was a very outdated system, that wasn’t possible. “You couldn’t do a forklift upgrade,” Sporer says. “So IT needed requirements around what functions had to move over and when.  The business manager needed a technology expert to guide her.” Instead, communications had completely broken down. “Neither side was willing to actually say what they thought; they just agitated each other,” Sporer says.

They had both encountered what Gartner distinguished vice president Tina Nunno calls a “political landmine.”

“Politics is the real reason we frequently cannot get things done in change management,” says Nunno, who is also author of The Wolf in CIO’s Clothing: A Machiavellian Strategy for Successful IT Leadership. “They’re the things we don’t often feel comfortable talking about, sometimes we can’t even identify them.” And yet, she says, when someone steps on these landmines, “our reactions are not only physical, they’re visceral. Sometimes your brain is telling you to be rational and you can’t.”

Solving for the wrong variable

Landmines tend to occur, Nunno says, when someone feels threatened in one or more of these areas: control, status, resources, or beliefs. “Whenever anyone threatens to touch on these things, people become irrational,” she says.

Unfortunately, they usually won’t admit it. As Nunno notes, it’s not socially acceptable to say something like, “I don’t want to go along with your integration project because you’re in my territory and I’m afraid you’ll take away my control and status in the organization.” So many people will say something else instead, for instance, that the project is too expensive or unnecessary. Faced with these objections, a CIO might do what seems logical and present the business case for why the project should go forward. “Because we can’t talk about these things, we accidentally solve for the wrong variable,” Nunno says.

The only way out of this impasse, experts agree, is to try and find out what the true problem is. “Use verbal diplomacy,” Nunno advises. “Say something like, ‘You’re obviously really uncomfortable with this. Can you tell me what’s really going on?’ When you switch from thinking questions to feeling questions, you are likelier to get to the truth of what’s really bothering someone, the political answer rather than the politically correct answer.”

When that happens, she says, you can acknowledge what the real problem is. “You can say, ‘I get that this messes with your control, and that’s really unpleasant.’ By being empathetic, you can de-escalate the situation. You may not get what you want but it won’t spiral out of control.” You may also be able to negotiate a resolution, perhaps by offering the other executive something in return or by working with that executive to manage the messaging so he or she can save face, she adds.

Having those conversations can be tough, but not having them can be very costly. “A CIO I knew at a very large company put out a bid to modernize some of their technology, but it had to be a like-for-like functional replacement,” Sporer says. “They basically spent $20 million to replace an old technology and make the new technology look and work like the old one. That happened because the CIO didn’t say, ‘If we’re going to do this, we should change to a new system, otherwise why do it?’ He didn’t have the energy or the courage to have that conversation and he probably would have won it.”

The light and dark sides of office politics

Verbal diplomacy is part of what Nunno and others call the “light” or “positive” side of office politics. “The light side of office politics is being open, honest, and transparent to resolve problems,” Nunno says. “I’m a fan of the light side, but when that doesn’t work, I advocate going to the dark side. That’s usually when there’s a dark side player, or a dark side situation.”

Sometimes, she says, you can tell that someone has “gone to the dark side” because he or she begins behaving differently than usual. Once again, data and logic won’t do you much good. “Stress is one of the dominant reasons people we’re in a conflict with go to the dark side,” Nunno says. “When someone is under stress, they become incapable of dealing with new data.” And, of course, she notes, these are very stressful times. “People are dealing with COVID-19. Revenues got destroyed. All of that is stress and it’s making it hard for people to incorporate new information.”

In a dark-side attack, people will often try to use their status or position as intimidation, Nunno says. It’s a bad idea to give in, because if it works, they’re likely to do it again in the future. “Someone might say, ‘It’s my budget money,’ even if their business case makes no sense,” she says. “Now, everyone knows that these are enterprise funds which all executives have a duty to protect. So a response might be, ‘Yes, you’re in charge of that budget and I’m in charge of IT. Let’s work together.’”

You also need to think ahead, she says. “Is this person likely to escalate this or will they keep it between us? If they’re going to the boss, the CIO should ideally go to the boss first. Say, ‘I’m going to say no to John, will you back me up?’ Because the worst case is you both go to the boss at the same time, and you don’t get backed up. Then John learns he can do it again.”

The changing role of IT

One reason IT often gets caught up in office politics is that the role of technology is changing in most organizations.

“As integral as it has become, IT still has the standing of infrastructure, like the light bill, in many organizations,” says Denise Rousseau, professor of organizational behavior and public policy at Carnegie Mellon University. She recalls one large hospital that decided to alter how physicians were compensated in response to a regulatory change. Management assumed that IT could implement that new protocol and simply assigned it to IT as a task. But nobody knew how to measure the desired activities, and in any case, the hospital’s data analysis capabilities were at capacity so there was no way to add a new job. The whole initiative quickly fell apart, largely because IT wasn’t included in early discussions about the change.

But as IT comes into its own as an essential function that should be present at high-level conversations, other business leaders may feel their territory is threatened. To make matters worse, some IT people feel vindicated by their new status and aren’t shy about saying so. “So many IT leaders grew up in an environment where they could not speak until spoken to and they had to toe the line,” says David Johnson, CTO of Mulytic Labs, a data and software solutions company headquartered in Munich with offices in New York. “Now businesses are seeing the advantages of IT getting involved, and IT’s response is, ‘Now you want my opinion? I’ve known this all along and I’m going to rub your nose in it.’”

Caught in the middle

Because every function across an organization needs technological help, IT can also get stuck dealing with competing priorities. “Often, IT finds itself in the middle because there are two parts of the business trying not to talk to each other,” says Frank Trainer, vice president of process and delivery at IT consulting firm Saggezza. “An example would be finance and sales. Sales has the goal to drum up a lot of business, and finance has the goal of getting good reporting and keeping track of the money being spent. In many organizations, Sales takes priority over other functions, which means finance could have a hard time getting the information it needs.” In an ideal world, IT might build an interface to allow finance to run numbers on its own, but again other projects are likely to take priority. So finance solves its problem by what Trainer calls “going through the back door.” That is, calling up a receptive IT employee and asking him or her to run a report.

Unfortunately, this caught-in-the-middle dynamic can create an unfair burden on IT people who are trying to keep everyone happy. Trainer recalls losing a highly valued employee because of it. “People in the company were asking him to do things on the side and he was doing them. He wasn’t talking to me about it; he was just taking care of things,” he says.

Eventually, that overworked employee burned out and took a job elsewhere. “That was a conversation breakdown,” Trainer says now. If they’d talked, Trainer says, he would have told the employee to stop being a hero and start letting the rest of the team know about these work requests coming in on the side. “Then the question is, Who has the right to prioritize that work? Is it the person who called? Usually not.”

Experts say that many office politics problems should be addressed with an honest conversation, what Nunno calls the light side of office politics. That’s how Anexinet’s Al Sporer and his team ended the war between the general manager who refused to provide requirements and the CIO who couldn’t proceed without them.

“We used this obstacle as an opportunity to create real change in the company — all the way up to the CEO,” he says. They resolved that business leaders needed to “own” the business features for their projects, and that IT leaders needed to speak up when that failed to happen. “The technology team became a trusted partner across every major business line, not just a servant with a big budget and crappy service.”

There’s a lesson here, he says, for every IT leader who wants to avoid stepping on political landmines. “CIOs and technical leaders need to have the courage to harness their knowledge of the business to become equal partners.”