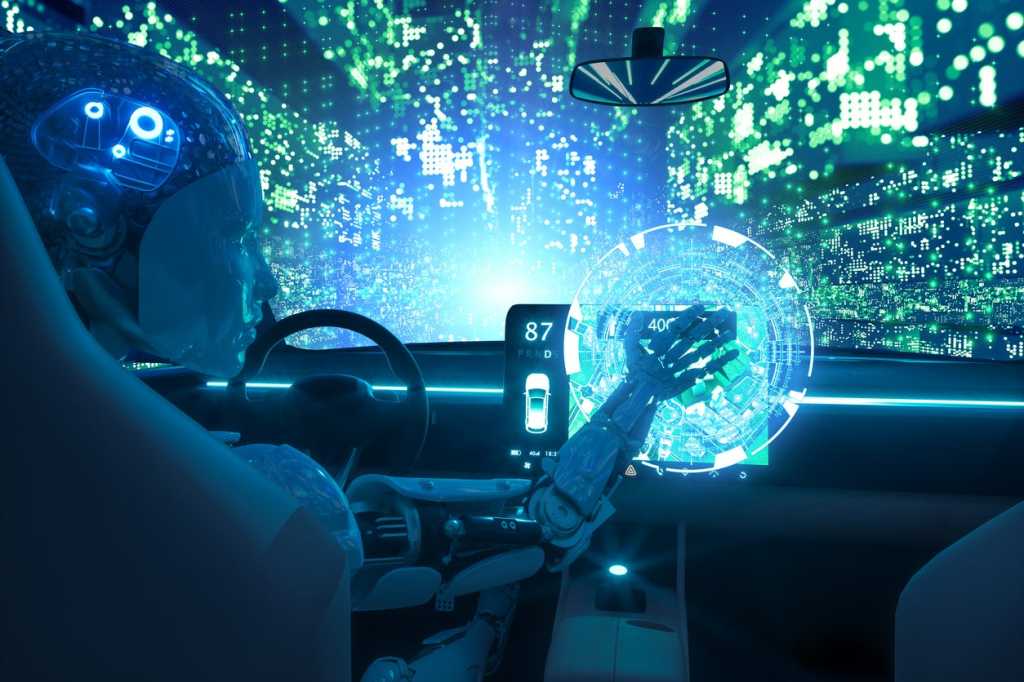 Step out of that time machine and you’ll see 2030 looks a lot different from 2020 or even 2025. These days work is more rewarding, because 4th Industrial Revolution (4IR) technologies have largely removed the monotonous stuff. What’s more, people are healthier, they get around easier, and have almost gotten used to all the drones.

Work has been reshaped by 4IR technologies including artificial intelligence (AI), machine learning (ML), Internet of Things (IoT) and robotics all working in concert. Office workers are no longer subject to boring tasks like data entry and document reviews, because intelligent automation solutions can “read” even complex unstructured content and deal with it effectively. Intelligent apps can even ferret out just the important emails in your inbox.

“Instead of data being centralized in a data center, or even in a cloud, where you can store it there in the cheapest manner, in the 4th Industrial Revolution, data must reside, be used, and be accessed everywhere,” says Paul Savill, Senior Vice President for Products and Services at Lumen Technologies

That leaves us humans to focus on important, strategic endeavors – we love that. And we have so many digital tools at our disposal to help with decision-making. Digital twin technology is now de-rigueur and combines with AI/ML technology to help us accurately predict how changes to processes, systems and even building infrastructure will work out. It really brings out the creativity in folks.

In factories and warehouses, robotics has likewise proved to be a game-changer. Sensors in robots combine with local edge and cloud-based ML applications to enable robots to react to changes in their environment, freeing them up to perform most any task. Here again, they relieve humans of the most repetitive and sometimes dangerous tasks while dramatically lowering costs. Many warehouses are now fully autonomous, with only one or two humans around just keeping an eye on things.

Yes, all those robots have taken jobs that once belonged to humans. But, thanks in large part to AR/VR technology, we’ve gotten much better at helping folks retrain for better-paying, more rewarding work. (The renewable energy sector is just booming, for example, as is tech. Even with AI/ML and predictive maintenance, it still takes a ton of people to deploy all these 4IR systems and keep them up and running.)

“Moving workloads closer to digital interactions, but only as close as they need to be,” was a key tactic in making this a reality, says Dave Shacochis, VP of Enterprise Technology and Field CTO at Lumen Technologies. “The combined power of the global public cloud with well-connected edge computing resources helped us overcome past restrictions around latency, bandwidth, privacy and reliability.”

Similarly, AI-powered drones help farmers and others, such as utilities, keep an eye on their vast infrastructure. For example, drones equipped with thermal imaging systems help utilities identify potential leaks and other issues with their pipelines.

Back in the city, you’ll likely notice all those vehicles with no people in them, or with “drivers” who are reading or otherwise disengaged. It took longer than folks like Elon Musk were telling us it would back in 2020, but now autonomous vehicles are common, especially in cities – because they work better in well-defined areas.

All the major automakers now own ride-hailing services that use autonomous vehicles. And the cars are popular with the well-heeled public as well (they’re still quite expensive). It’d be great to say it’s helped improve traffic flow but until we’re 100% autonomous, it doesn’t look like that’ll happen – human drivers know the autonomous cars will stop and act accordingly (especially in Massachusetts).

If you do get in an accident, you’ll find the healthcare system is vastly improved. Medicine is now highly personalized, secure, and confidential. At birth, everyone gets their genome sequenced. Combined with predictive AI-based applications, and state-of -the-art security and privacy measures, that enables doctors to accurately predict which medicines will work best for any given condition and which diseases a patient may be at risk for. Telemedicine is the order of the day, so office visits are usually not required.

OK, time to get back now. IT folks like you have a lot of work to do to make all this a reality in just 10 years’ time. One hint: your job will be a lot easier if you partner with a company such as Lumen, which has a platform that bridges network, data center, cloud and edge computing with managed services, including security. Trust me on that one.