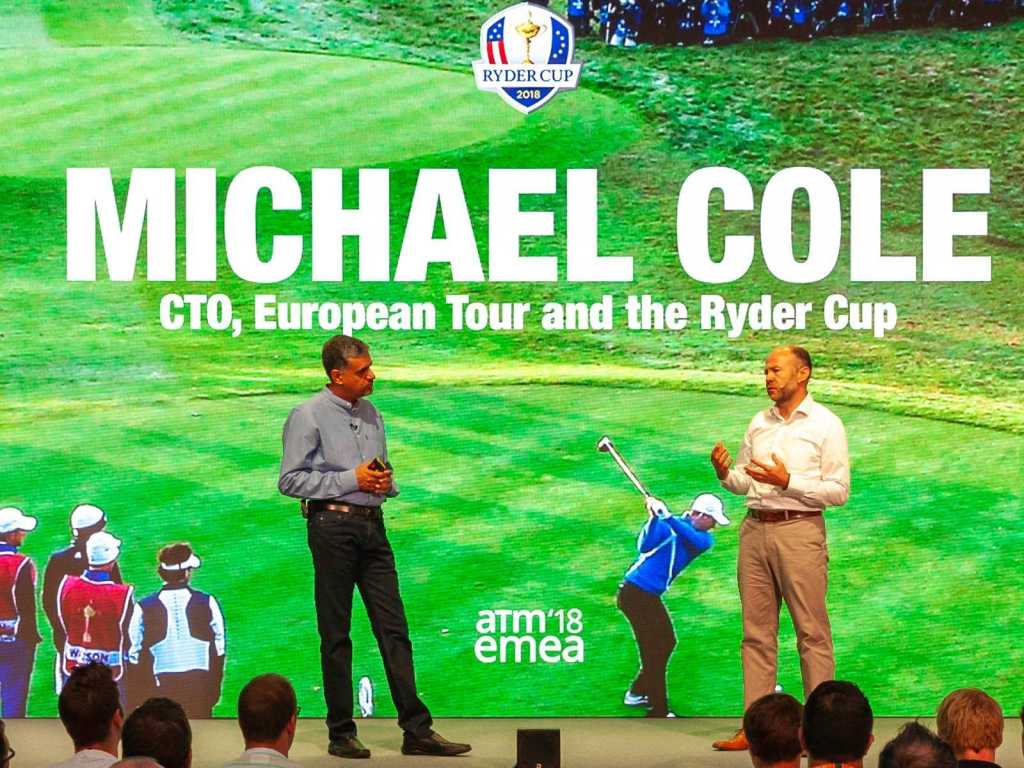 Ryder Cup CTO Michael Cole is confident ahead of this week’s 42nd Ryder Cup the organisation is ready to deliver a unique experience for players, officials and fans as the European Tour looks to create the “connected course” and drive the transformation of global golf.

Cole joined the European Tour as Chief Technology Officer in November 2017, and as such has responsibility for delivering the 2018 Ryder Cup at Le Golf National in Versailles. He was speaking to CIO UK at the Aruba Atmosphere event in Croatia earlier in the summer as he described how the organisation was going through its biggest period of technology investment it had ever made, including developing deep partnerships with HPE and networking infrastructure provider Aruba.

Having worked on technology delivery during the London 2012 Olympics, Cole said that with 47 tournaments in 30 countries across five continents and a close season of just three days, the organisation had “no real down time” but that he was confident in their ability to deliver a new technology experience at the biennial golf competition.

“My responsibilities including technology, digital, data and data management,” he said. “Our close season is just three days, we have no real down time. It is constantly on that go. Operationally we deliver across those countries, across those continents week in, week out.

“I’ve come from the world of Olympics and the one thing I know, that timescales never slip. The day of the event, is the day that it will take place. And absolutely critical it is tried and tested technology, that it’s delivered in a flawless way.

“So we are working very closely with our technology partners. We are pre-staging equipment, we are running tests, we are scaling up, we are staging off-site, we’re running test events, we will do tech rehearsals right up to the event itself. So, how confident am I? I’m very confident.”

Cole and the European Tour will be welcoming some 250,000 spectators over five days to the Ryder Cup, and the CTO said in June 2018 that HPE Aruba was a key partner in the digital transformation of the sport.

“I’m really excited about the partnership,” he said. “This is actually the biggest investment in technology we have ever made for a Ryder Cup. And this investment gives us the perfect platform, not just for the Ryder Cup but also for the European Tour.

“Driving the technology off the back of the Ryder Cup to serve our purposes every year for the next four years is critical for us.

“For me this is a quadrennial cycle. I will invest in technology in a Ryder Cup year, and that technology will then continue to be used throughout the next four years. In the conversations with HPE Aruba, based on the technology being pretty familiar to us they were prepared to enter into a true partnership and we were prepared to make our largest investment in technology that we ever have done for the Ryder Cup.

As well as fitting into the European Tour’s quadrennial cycle, Cole said that the investment was a part of a two-year programme which he referred to as his 2020 vision which included moving more systems to the cloud, redeveloping business applications, the integration of back-office systems – and fundamentally trying to create the “connected course”.

“It’s really recognising that the European tour requires a transformation of its technology if it’s going to support the transformation of global golf,” he said. “What does that mean in reality? It means we have to reinvest in some legacy systems that haven’t changed in perhaps 20 years.

“It means that we need a more robust and secure environment, so we are moving more of our systems out to the cloud to give us the security, accessibility, and the flexibility to move forward. We are migrating digital systems onto next generation platforms and we’ll see that come to life in the early part of 2019.

“We are rearchitecting and redeveloping our scoring systems because again it’s suffered from being a legacy system. We need to improve upon the way we are capturing scoring, and the way it’s integrated with our back-end systems so that actually we can service the huge volume of third parties out there that take our scoring in a real-time environment and that’s something that we can’t do today.

The CTO, who worked on the London 2012 Olympics as the Marketing and Communications Director at BT Global Services, said that perhaps technology had not received enough investment in the past to keep up with other sporting and media organisations, and looked to the future about how emerging technologies would impact global golf.

Cole quipped that “it wouldn’t be a proper CIO interview unless I threw in cognitive learning or artificial intelligence”, and said that looking further forward that “future technologies like Whitespace and 5G could be critical in terms of operating and delivering more effective technology for our golf tournaments”.

Cole described some of the unique challenges to the golfing world of delivering a robust IT infrastructure to support all the different elements of staging a major golf tournament.

“For each tournament we have to deploy around five infrastructures or five networks,” Cole said. “We’re very much about temporary overlay. The TV and broadcast, the walking scorers  – 80 volunteers with handheld devices – we have tournament TV and the big screens which require their own infrastructure, and of course the public WiFi. Last but not least the operational infrastructure as well.

“Week in week out we are deploying five infrastructures for each tournament, and one of our operational challenges is how we do that in a very flawless and efficient way?

“Our challenges are pretty unique – we’re not a stadium. Or Wimbledon where they have maybe 50 weeks to prepare for a two-week tournament. Or a Formula 1 Grand Prix where there are 21 GPs a year but they are returning to the same circuits; 90% of our courses are greenfield sites, literally – 150 acres is a big footprint. That’s the equivalent of about 85 football pitches.”

As well as trying to lead the transformation of global golf, Cole explained how the European Tour was increasingly trying to see itself as a media entertainment company rather than a sports organisation with a focus on fan engagement.

“We see ourselves as being the brand challenger in the golf industry,” Cole explained. “We are very much leading the transformation of global golf – we very much see ourselves being an entertainment company because we want to change the conversation, we want to appeal to a broad audience with wider interests  and golf is our platform to do that.

Critical to that role, Cole said, is focusing on the fan experience and how followers engage with the game as well as developing new audiences.

“The fans are a critical audience for us,” he said. “We see ourselves as an entertainment company; we see ourselves about broadening the interest and widening the engagement to give fans a truly immersive environment. Golf is our product.

“We want to immerse the spectator and give them the experience that arguably they weren’t expecting at a golf tournament. We are looking at new waves of innovation and will be trialling these in the run-up to the Ryder Cup.”