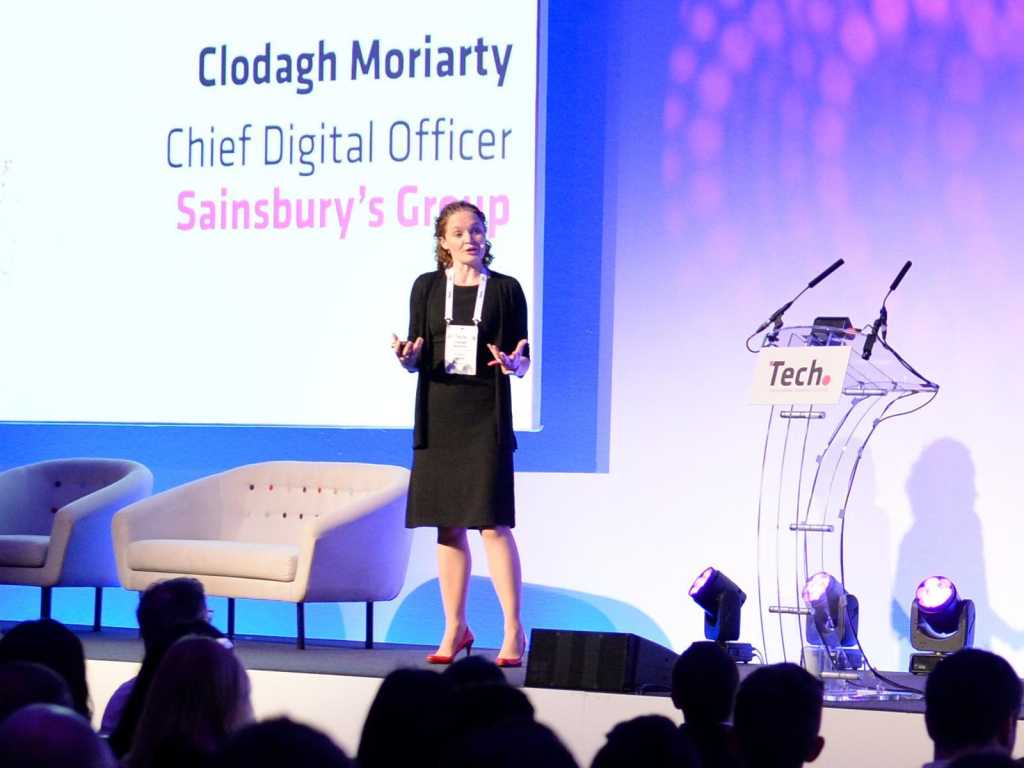 Clodagh Moriarty says she has “the best job at Sainsbury’s” but it isn’t always meeting customer demands for digital.

“They don’t even view it [digital] as a channel,” the Chief Digital Officer explained at the Tech. Festival 2019 in London yesterday. “They view it as a way of engaging, doing business and living their lives. Whether that is social, on-demand TV, food service home delivery, it is just core to how we operate today. Customers – people – just want things how, when and where they want them.”

Sainsbury’s has responded to this trend by introducing delivery app Chop Chop, the Click & Collect scheduled collection service and SmartShop, a new in-store app that lets users scan their products as they shop and then skip the checkout queues, but the supermarket has also had to upgrade a vast legacy estate.

The company has been operating for 150 years, which have brought with them heritage, scale and range – and many monolithic systems.

The IT team has responded by breaking down monoliths into their individual modules such as recommendation engines and favourites, and then reusing these across all digital propositions. They’ve further improved the estate by upgrading the connectivity in stores and migrating to the cloud, which led page load speeds to improve by over 50% overnight and production releases to go from slow and unreliable to fast and agile.

“It’s mildly embarrassing, but we used to operate in a world where we could release new functionality and updates to our customer five-to-six times a year, and each time committing the cardinal sin of a customer outage,” Moriarty admitted. “Now we can release as frequently as in-day, multiple times, with no customer outage.”

There are also risks in trying to cater to digital customers.

“At one point everyone seemed to think an app was needed,” Moriarty recalled. “For us at Sainsbury’s, it was a bit like whack-a-mole – every time I turned around a new app had sprung up somewhere. And we addressed that organisationally by bringing together all the digital products and the corresponding P&Ls into one place.”

This process began with bringing SmartShop and Chop Chop together in one app. Moriarty said that customers loved the control and convenience and that it led 11% of them to start SmartShop – a significant uptake as SmartShop customers spend an average of 18% more at Sainsbury’s.

Read next: Leading CIOs, CDOs and CTOs in retail

Feedback from customers is also influencing the future development of the app. Around 80% of them said they wanted digital Nectar points and offers in-flow, which has led Sainsbury’s to launch this service across its entire estate, while 82% expected to have a single account for all digital services, which convinced Sainsbury’s to build a new identity platform.

“All of this helps deliver in the now but is also fuel for future growth,” Moriarty said.

The Sainsbury’s business also encompasses Argos, Habitat, Tu and Nectar, which the company is trying to bring together where they converge and keep separate where they offer unique customer experiences.

The company has been testing how to integrate these digital services and plans to have a single solution for the catalogues and categories next year.

Moriarty uses the example of a barbecue to explain how this could work. If a customer adds burgers from Sainsbury’s to their basket, they might then be offered tongs from Habitat, a barbecue from Argos and an umbrella from Tu in case the UK weather lets them down. The company’s fast fulfilment options would allow it to deliver all these products to any customer that same day.

Sainsbury’s also plans to provide personalised, in-store, real-time offers, rewards and recommendations to digital Nectar customers while they scan their products through SmartShop, such as suggesting a wine for a dish that they’ve just bought. Users will be able to choose the level of interaction they want.

Moriarty believes the combination of these initiatives will allow Sainsbury’s to offer a faster, more convenient and better-value shopping experience.

“We can now anticipate or rapidly respond to where our customers – knowingly or not – need us and expect us to be,” she said.