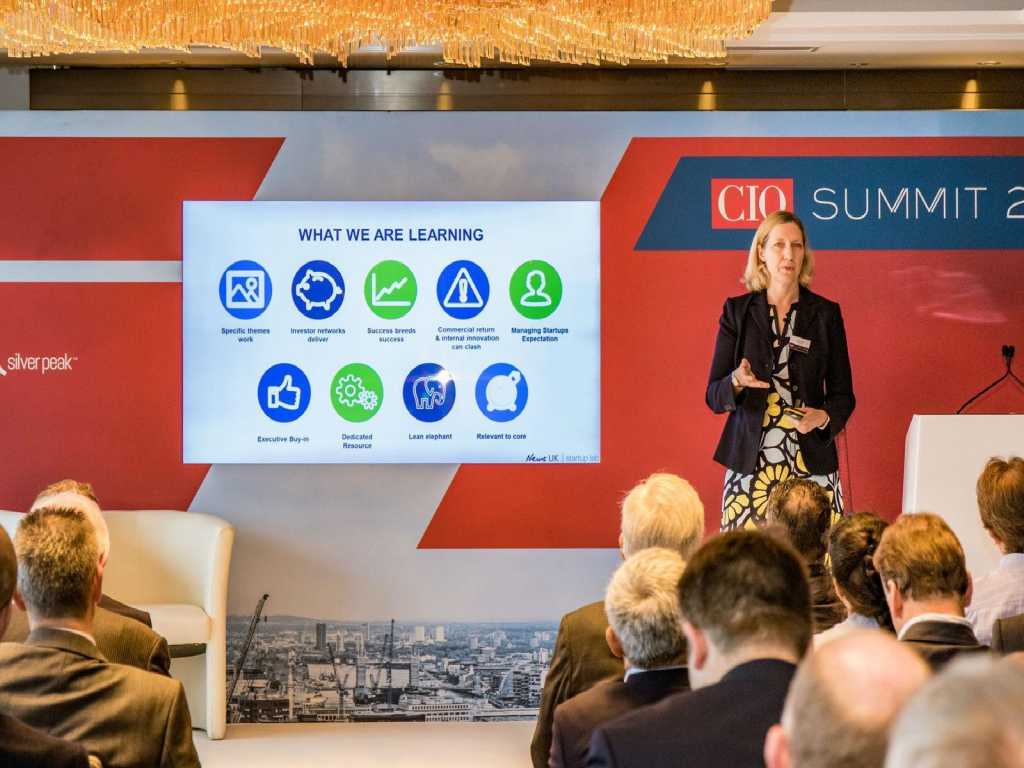 News UK CTO Christina Scott said that organisations should not get distracted from their core goals and missions when she discussed the media company’s startup innovation lab initiative.

Scott was the opening speaker at the 2018 CIO Summit held in London at the Shangri-La Hotel in The Shard, and said that large enterprises can learn a lot from open dialogue or collaboration with the right startups – and equally so from the entire process of working with small companies by developing your own style of engagement.

“We have to stay close to our core and think about what is important to us. We know there will be a large failure rate but we have to focus on the process and what we have picked up along the way,” Scott said.

Scott explained the ins and outs of the four-week incubator programme, which included six startups and was hosted at News UK-owned Unruly’s headquarters in partnership with production innovation company, Fluxx.

“I think for a long time we’ve been struggling with really looking at innovation within the company,” said Scott. “It’s really hard when you have lots of teams who are just focused on the day-to-day and I think it’s really hard for those same teams to really think out of the box, and as much as you want to give the teams that opportunity, you kind of need to break them out of that cycle.”

“So I set up with our CFO, the News UK Startup Lab, and we’ve never done this before. We spoke to lots of different companies who have and we spoke to companies who set up incubators and accelerators.”

The decision to prioritise early-stage startups was based on the expectation that there would be a wider talent pool to pick from. In doing so, however, there were other hurdles to cross and more questions they had to answer.

As a major content provider, News UK was not familiar with working with startups, so it was a learning curve for the organisations as well as the C-suite execs involved.

Scott said that the CFO and herself had different definitions of success from the project – whether that was ROI or a broader cultural change in the organisation – and that communication was key among senior stakeholders and sponsors to be really clear about what the initiative was trying to achieve.

The initial process saw six startups chosen from 12 that pitched in front of the whole company. This was followed with the decision to host a phase two initiative that focused on Series A startups.

“We found that actually working with early-stage startups is really tough, the overhead’s big. We spent a lot of time doing various bits of training, and there are a lot of incubators and there are lots of people who do that really well, I just don’t think for us we felt that the amount of overhead was really worth it for the company,” Scott said.

She explained that it is okay to make changes along the way, it shows the benefits of review, and it is all part of the process. For News UK, the change was shifting the incubator focus from residential to open for all, giving startups an opportunity to visit and work with the teams flexibly.

“We were bringing it closer to the core and we themed it, and that made a difference,” Scott added. “Then we moved on to where we are now and what we’re doing is an always-on capability, making sure that we bring the talent into themes that we’re thinking of.”

She explained the importance of finding out what problems the startups are trying to actually solve as a business, which was crucial in identifying those with the passion and dedication to make a difference in the market.

The recruitment process can prove difficult, Scott explained, due to the constant back and forth in communication between startups and the organisation.

Scott shared some of the lessons that the company learnt during the process. One of those was that specific themes work well, which was clear when the company began to think about the startups it would invest in.

“Managing startups’ expectations, we definitely learned this,” she added. “In the first one, we tried to say the sort of investment we would put up front but we took a long time wrangling around terms and conditions.

“We found the investor networks really helped us, we stayed away from them in the first instance. In the second instance, we’ve now made contact with lots of different VCs and actually having that network they’re constantly talking about new startups,” she said.

Scott also explained the importance of defining roles throughout the process, so there’s a set strategy and it’s crystal clear across the organisation who has what responsibilities.

“It’s important that you have a structure that the whole company can understand, that there’s a framework to work through and that you have the right governance. We have an executive committee that the deals are presented to and the startups get presented to.

“We make sure that the right people are involved at the right time, and that we really are trying to get the most of the investment,” she added.

Overall, Scott explained that the organisations investment in select startups has led to ongoing relationships between News UK and startups. One example is with a startup that has now formed a relationship with its commercial team.

“It’s launching on Style, so one of our Sunday Times fashion brands, and I think it’s just a really good example of where we felt we found something that really fit with our company, our culture and actually the sort of thing we were looking at in the advertising space,” she said.