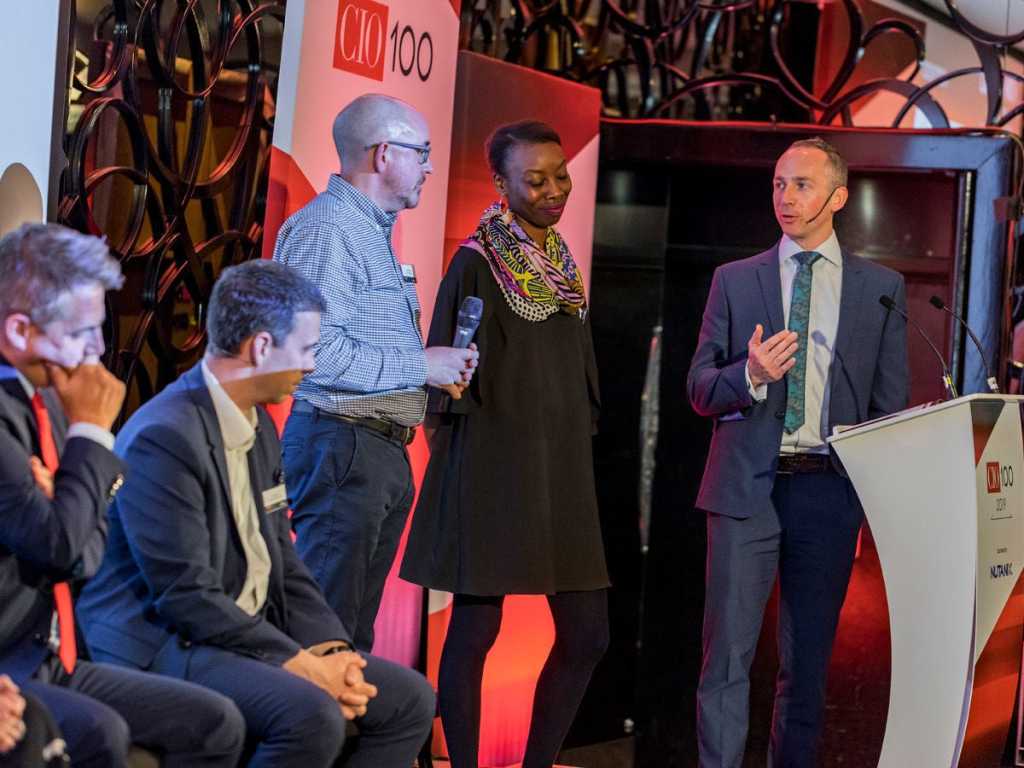 A 2019 CIO 100 special edition podcast featuring comments from some 10 CIOs looking at themes from the latest edition of the annual CIO celebration, and discussion of the emerging trends, themes, challenges and opportunities of the role.

The 2019 CIO 100 celebration dinner was hosted by CIO UK Editor Edward Qualtrough at the May Fair Hotel in London, and the CIO UK podcast brings you some of the comments on the night from CIO 100 leaders Andrew Quail, Director of IT & Innovation at SGN, Rentokil Initial IT Director Dan McCormick, Radius Payment Solutions CIO Dave Roberts, and Food Standards Agency Director of Openness, Data and Digital Julie Pierce.

CIO of the Year Europe

As part of the closing comments on the night, the CIO of the Year Europe awards was introduced to the 2019 CIO 100 cohort, who were invited to put themselves, their teams and their organisations forwards for recognition in the Europe-wide CIO initiative.

IDG’s CIO of the Year Europe initiative will recognise CIOs at enterprise level and SME businesses, as well as offering awards in innovation, diversity and sustainability categories.

You can find out more about CIO of the Year Europe here.

“Fundamentally, what the team at SGN have done is totally change what they are about and what they do.

“My team have really transformed from being a keep the lights on, in our case ‘keep the gas flowing’, organisation to one which is really about fuelling agility, efficiency and growth in a company that’s not used to doing that. So really leading that charge, bringing technology and innovation to the fore.

“The innovation team that I’m very proud to be responsible for have really led the industry in terms of what we do and how we drive innovation. We’ve put in pipe robotics; we are really at the forefront of putting robotics into the industry.” Andrew Quail, SGN Director of IT & Innovation

“Innovation to me is part of the core, it’s part of the culture. It’s not a project, it’s not change programme. It’s just what we do now. And it’s exciting.” Dan McCormick, Rentokil Initial IT Director

“Please engage with the governance, security and ethics piece – please engage with that whole societal question. Don’t just operate within your organisation or silo – please have those conversations across your whole sector with us as as regulators, and everybody and anybody who wants to have the conversation. And help us all work towards something that’s going to benefit the whole of society.” Julie Pierce, FSA Director of Openness, Data and Digital

“We’ve had to make room for innovation; to separate the business as usual, day-to-day activities. We’ve created teams that can actually go out there and experiment with technologies and have a true R&D function that is then able to look at how we can diversify our products, and then provide an environment where not everything will always work, but there is there is a culture where you can fail, but fail fast.” Dave Roberts, Radius Payment Solutions CIO

“One challenge is the dual function that the CIO has to have in organisations, on the one hand as a source of innovation and change, and on the other as a source of regulation, compliance and governance. And I have a feeling that’s going to get increasingly hard again, if it’s not hard already.” Matt Ballantine, CIO 100 judge

“The need to nurture local talent within the UK industry and building our digital skills is the job of every CIO in the room. And that you all should try to make sure that it’s fundamental in our work, pipeline work to go into our local communities to go into our schools go into our universities, to find that talent. ” Adizah Tejani, CIO 100 judge

“Definitely come along, definitely put in an entry. If nothing else, to actually to reflect on your achievements of the past year is a really refreshing and really invigorating thing to do. And I recommend everyone to do it.” Sarah Winmill, British Transport Police CIO

“As a group the CIO 100 is a really powerful body of people within the UK, largely vendor agnostic, a massive networking group, so that when someone in my position has a challenge, I’ve got this brother and sisterhood. I can go to people within that lonely position of being CIO and say ‘guys, can you help me?’ And when they do the same, I do the same – and it’s brilliant.” Pete Williamson, Knights Brown Construction CIO

“I think as ever, the CIO 100 is about celebrating the diverse range of tech talent, leadership and innovation across the UK.

There’s some extraordinary people, we all share common ground despite coming from incredibly diverse sectors. And it’s amazing to me to know that we continually come across the same challenges, be that data, digital, whatever it happens to be.” Claire Priestley, City University, London IT Director

“I’m really pleased to be on the CIO 100 because I think it really does showcase some of the work that I’ve been doing and my colleagues have been doing. It’s really humbling to be on the list.” Kevin Gibbs, Bracknell Forest Council Executive Director of Delivery