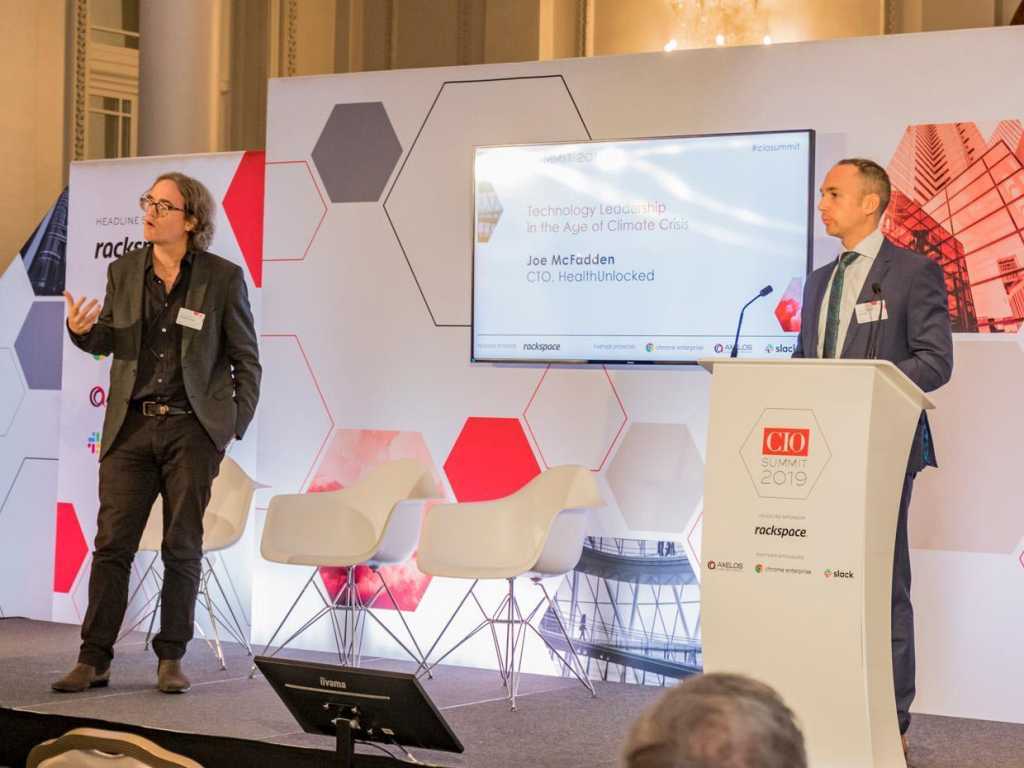 Sustainability has long been a CIO priority for recently appointed CTO of HealthUnlocked, Joe McFadden. And speaking at the 2019 CIO Summit, McFadden detailed the work he did in his previous role as CTO the Royal Opera House, helping to deliver change and refresh the organisation’s sustainability plan.

The Covent Garden institution is the recipient of Arts Council funding, which comes with a number of environmental pre-requisites. McFadden explained that, as a result, it wasn’t difficult to develop a sustainability plan as it was already being driven, in part, by external policy requirements.

“The executive team at the Opera House felt that it was really important for an organisation leading in the cultural sector to be able to talk confidently and to be able to show that we’re committed to sustainability,” he said.

As CTO and the sustainability lead at ROH, McFadden explained the company developed a three-part strategy that revolved around “people, places and production”. It was committed to raising awareness both internally and externally, wanting to tell stories about sustainability while acknowledging the fact “the organisation is a large public building in the centre of London that has an energy footprint and has waste implications” – and taking the opportunity to revaluate its international supply chain and the changes that could be made to make it more efficient.

In September of 2018, the Royal Opera House completed a major ‘Open Up’ building refurbishment project which McFadden says the organisation used as an opportunity to overhaul a lot of its legacy infrastructure and replace it with more efficient and sustainable alternatives.

For example, by installing LED lights in the theatre, the company is expecting to see a 20% reduction in its energy costs over a single performance season.

“To put that in context,” he says, “the Royal Opera House, in terms of its annual energy cost, is probably spending just a bit under £2 million a year. Obviously, there’s real money to be saved there.”

Having a member of the C-suite who is passionate about sustainability and is willing to be the driving force behind internal policy change has not always been an easy find for organisations. However, as the climate crisis has increasingly entered the public domain, many businesses have found that if they don’t make sustainability a key part of their mission statement, eco-conscious customers might start to take their money elsewhere.

McFadden said that financial savings like the one the Royal Opera House is making by being more energy efficient means “there’s a strong financial argument for sustainability initiatives that a CEO or a CFO will also listen to.”

In her presentation at the 2019 CIO summit, Mattie Yeta, government sustainable ICT lead at the Department for Environment, Food and Rural Affairs, detailed how the digital and technology sector has the potential to reduce the world’s emissions by 15% – one third of the world’s emissions.

“We have the potential and opportunity to save 600 million euros,” she told the audience. “If we were to become more circular, it would generate 1.8 trillion euros in other economic benefits. In the UK alone, we could generate 22,000 jobs a year by hitting our recycling targets.”

The biggest problem facing organisations across all sectors is that tackling climate change is far more complex than simply offsetting your carbon footprint or stopping your employees from eating red meat. The linear economy, of which we are all part of and contribute to, needs to be completely overhauled and wide-spread, deep-routed, societal change needs to be enacted by businesses and governments across the globe.

She explained that if society was to instead embrace a circular economic model, we would be able to eliminate waste by reusing, repairing, re-manufacturing and refurbishing assets and devices, thereby helping to keep them in use for longer.

Yeta’s comments were backed up by her Defra colleague, Adam Turner, HMG Lead for Sustainable and Digital Services. He noted a number of statistics specifically relating to the direct impact technology is having on the environment, saying that one of the biggest issues in the sector is the amount of e-waste.

“We don’t really know where about 80% of e-waste is going in all honesty,” Turner says. “And obviously countries around the world that used to accept our ICT waste are no longer accepting that anymore. The UN has been very clear to countries that you need to get a handle on where your ICT waste is going.”

The issue of e-waste is directly tied to the linear economy and how companies have traditionally built electronic equipment. He explained that there is only finite amount of natural resources that are used to make devices such as smartphones.

“The geopolitical angles on this and the climate change angles on where this stuff is and the ownership of that stuff and our relationship to get those critical materials to build our IT becoming more important.”

Quoting a recent study on ICT waste, Turner said that the amount of money currently tied up in ICT waste is the equivalent to the GDP of a country similar in size to Croatia or Bulgaria. As a result, Defra has also rolled out a number of sustainability targets for the government to meet, covering everything from waste to travel, paper and sustainable procurement. Its Sustainable Technology Strategy, launched in December 2018, has members from every government department alongside academics, commercial services, techUK representatives and industry names.

“We work together to develop best practices and publish guidance on all of that kind of stuff,” Turner says. “The important thing here is that body reports into what is effectively the government’s CIO Council to make sure it’s aligned to everything that we’re doing and how they can help drive this forward.”

What’s your role in the sustainability agenda?

The sustainability thread at the 2019 CIO Summit was clearly at the forefront of many attendees’ minds.

Clare Patterson, CIO at Shell Energy, discussed how the challenge of providing cleaner energy, and more of it, to a growing population was driving cultural changes as much as digitisation in the energy sector.

“IT plays a key role in adapting to that challenge but we can’t just carry on doing the things that we’ve already done,” Patterson said. “It really is that huge shift in how we tackle such an enormous challenge, and at Shell, we say that our purpose is not only to provide more energy, which we clearly need to do, but also more cleaner energy.”

Introducing McFadden’s discussion on ‘Technology Leadership in the Age of Climate Crisis’ after Defra sustainability leads Turner and Yeta had made their ‘sustainability call to arms’, CIO UK Editor Edward Qualtrough delivered a provocation for the assembled guests. Paraphrasing a book about delivering positive change in your sector, he said that whether you are the CEO of Microsoft or a junior developer, you can have an impact on your industry.

“None of us are tenants of someone else’s industry, we are the sector and if we don’t change it nobody else will. We’re not going to get permission to change it because there is no one who is in a position to grant that permission. If we want to create change, the only people we have to ask permission of are ourselves.”