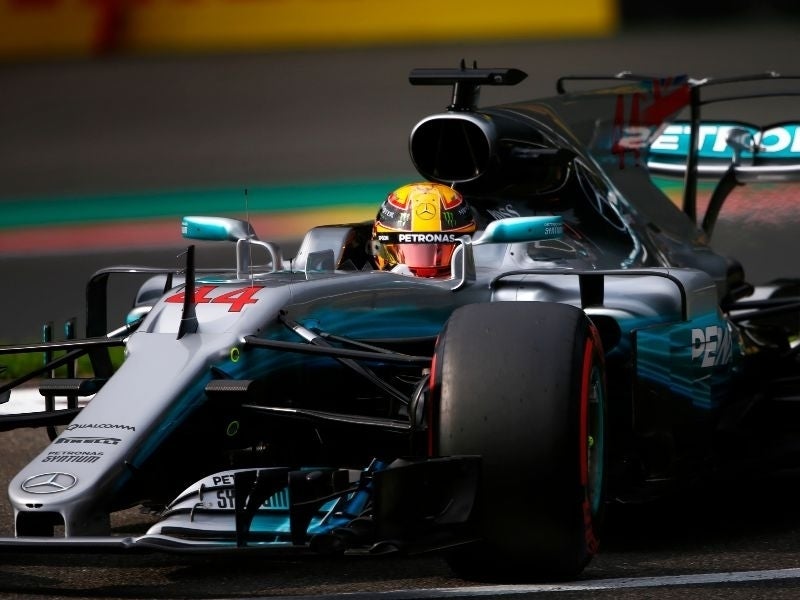 Mercedes-AMG Petronas Motorsport is racing ahead in the 2017 Formula 1 championship, and on course to win both the constructors’ and drivers’ titles for the fourth season in the row.

While its superstar drivers such as Lewis Hamilton earn millions of pounds, critical acclaim and public adoration, their victories would be impossible without the 700-strong workforce supporting them beyond the spotlight.

It includes an IT team headed up by Matt Harris.

Harris is responsible for both the IT setup at the factory in Brackley, Northamptonshire, and the trackside infrastructure at race weekends, to which at least two of the roughly 30 members of his team always travel. The global interest in the sport means they’re on the road a lot.

The F1 calendar packs 20 race weekends in 20 different countries and around 100,000 miles of travelling into its eight-month season.

The Mercedes team drives two enormous trucks to every European event, which are converted into an engineering office on arrival at the track.

“Think of two articulated lorries, then pop up the tops so they go up higher, then take the sides down and up to create the roof and the floor, put some ends on and you’ve got a massive office space,” explains Harris.

“That’s the engineering environment for the race weekend, and then alongside that we have a motorhome.”

This isn’t the type of motorhome that you’ll find parked in caravan sites. It consists of around 30 containers that are put together to form a massive cube.

It also serves as a hospitality venue for guests of Mercedes-AMG Petronas, who can use its multimedia and data connectivity to do their work.

For ‘flyaway’ events that take place outside Europe, all that equipment is packed into special air shipping containers that are flown around the world.

The IT team contribute two 24U server racks to the cargo. They’re stacked with a few hundred terabytes of Pure Storage devices connected to Cisco Unified Computing Systems (UCS), with multiple wireless access points supporting team and guest requirements, a full AD domain, and associated services including SQL servers and gig connectivity to every device at the track.

“All the stuff you’d expect in a normal branch office,” is how Harris describes it. “And we stick in a nice dirty dusty environment in the garage with carbon fibre cars running with no air conditioning.”

It takes around 36 hours to put everything together during a race weekend. They then run the setup for four days at European events and five at flyaways.

“We run it the Wednesday, Thursday, Friday, Saturday, Sunday,” says Harris, who reports to the Chief Operations Officer. Then it’s six hours to pull it apart, move it to the next event and hopefully it all works again hunky dory.”

Data is of growing importance to the Mercedes F1 team. Its influence on the setup of the car and the strategy at the race can make the difference between spraying champagne on the podium and crashing out on the track.

As the cars run on the track live telemetry follows them round it over a third party network and sends the data to the teams. The Silver Arrows analyse the information in real-time to identify any issues with the car and ways in which the driver and the vehicle can improve on the performance.

“Each car has approximately 200 sensors,” says Harris. “It does vary during a race weekend as to exactly how many because sensors are weight, and weight is less performance, so you always have that careful consideration between performance and information.

“All of the teams have the same ECU [Electronic Control Unit], and the limitation on that is the speed that you can get data in and out of it, so you try and optimise the amount of data you store on it to try and minimise the amount of time it takes to get the data off.”

“We can get a couple of gig off the car in a couple of seconds over WiFi,” says Harris. “We then plug it in the garage, get more data as well, and that’s looked at in real-time by people in the factory and at the track.”

A TATA Multi-Protocol Label Switching (MPLS) service takes data from the track to the factory, where there are none of the trackside limits on the number of team members who can analyse it. Some of the staff will receive a generic overview of performance, while others will be assigned to specific tasks, such as reviewing the engine, tyres or aero or a new addition to the car.

To augment the human analysis and reduce data processing, Mercedes is working with Tibco on ways to maximise efficiency through automated anomaly detection.

“You’re now starting to engineer by exception rather than having to be clever enough to know what you’re looking for,” says Harris.

Data for performance and reliability

In total, they can accumulate up to 30 terabytes of data in a weekend. When the race is over, the work continues in testing at the factory.

“When we’re truly testing, we have a lot more sensors on the car and a lot more data,” explains Harris. “A lot of the time that’s trying to correlate between other systems – our wind tunnel or CFD [Computational Fluid Dynamics] in our computerised simulations.

“When we’re racing it’s not all about reliability. There is performance-related data in there as well, and we’re always trying to be able to make the right decisions as quick as humanly possible.”

They use multiple data sources to assess performance but one stands out above the others.

“If you were to ask anybody that’s in F1 that knows what they’re talking about, the biggest possible differentiator between any of the teams at the moment is tyres,” says Harris.

“Now you’ll hear lots of people going on about the engine – and yes, that’s important, and we’re lucky enough to have one of the best in the pit lane – but if we get tyres wrong we won’t be the fastest. We could quite easily be mid-table.”

Simulations of the car and analysis of sensor data help them optimise tyre performance and get the fronts and rears to work together at the right temperature.

Multiple streams of data help the team sat in the control at the pit wall decide what to do. Some of it is based on what they understand about tyres, and some of it is based on what is happening live on the circuit. This could be different to the data from the previous day’s practice or qualifying laps due to changing conditions such as track temperature, rain, or crashes.

The team will also assess the decisions made by their rival teams and the effect that they have on performance.

“Generally we’ll know what we think we should be doing via simulation, but the human element always comes in there,” says Harris.

Those simulations have nonetheless becoming increasingly vital in his 20 years in the sport, particularly due to a spate of recent restrictions on testing.

Mercedes has always been very data-driven at the track, and is trying to extend this approach throughout the organisation.

“We’ve always been incredibly data-driven in everything we do at the track,” says Harris. “Even if the driver turns around and tells you that something happened at a certain part on the track, we will always go back to data to prove why and where and how it happened, and what we should do and how we should change it.

“If you look at the business as a whole, we don’t necessarily use data as well as we’ve done at the track for all the other things we do in the business.

“There’s now a lot more work going into data analysis around all the other things that we do, whether it’s vehicle simulation, or our ERP and our CAD systems, about how we can optimise our performance as a business.”

This strategy includes working with Tibco on ways to harness the power of data analysis to drive efficiencies throughout the business, and with Pure Storage to ensure that the engineers in the factory receive race information as quickly as their colleagues trackside.

This previously could take up to five minutes more time to arrive. There are only a few minutes between one qualifying round and the next, so that delay can be crucial.

IT back at the factory

The IT team play a big role in what happens on the track but many never get to witness the results of in person. Trips to test days at Silverstone and visits to the factory by drivers Lewis Hamilton and Valtteri Bottas bring a trace of the race experience to them.

“We actually had Lewis come into the IT department a couple of weeks ago,” says Harris. “That was a massive boost to a load of the guys, because we’re quite removed from the track in a lot of instances.

“Some guys get to go to the track regularly because it’s part of their job, but some of them have never been to the track and it’s unlikely they’ll get to go in many instances.”

They’re kept busy enough at the factory in Brackley. The team is currently working on a major project to make their Product Lifecycle Management (PLM) and Enterprise Resource Planning [ERP] systems more streamlined and user-efficient, but Harris also likes them to develop their own IT ideas.

“People go on about shadow IT,” he explains. “What we do is we allow them to do things in their own little safety areas, and then help them to productionise that as and when it’s actually big enough to be used across the business.”

Cyber security is one area that has taken a more official direction. The engineering secrets behind the success of Formula 1 teams rarely leave the paddock, but their concealment faces a growing threat from hackers.

“I was talking to Toto [Wolff, the Mercedes F1 team boss] about this yesterday,” says Harris. “We recently employed an information security lead. At present security is part of IT. In my view, it shouldn’t be longer term. It’s bigger than IT when you’re talking about information security but it’s a good start that we’ve got the role.

“It’s interesting because car data is really really sensitive until you put it in the big wide world and everybody can take a photo of it. So keeping it secret as long as possible is important.

“After that, it’s actually all the other things we do around process and simulation and everything else that are kept more secret. That’s where they stop physical testing and we have to find other ways to try and improve our performance in between events.”