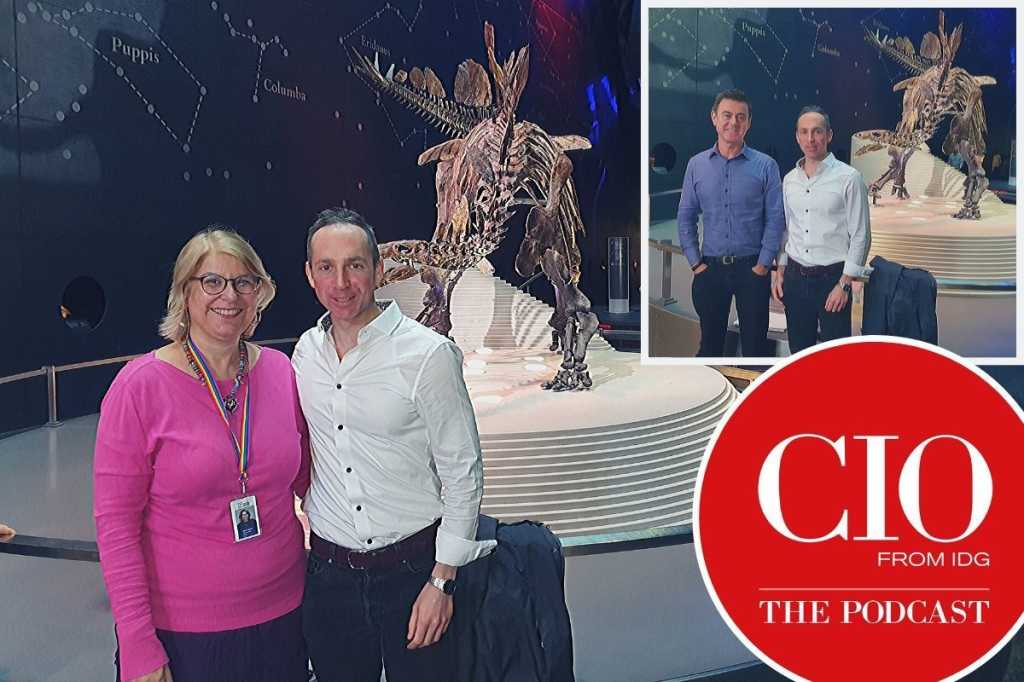 New Natural History Museum CIO Alison Davis joined her two predecessors, Ian Golding and David Thomas, during episode 25 of the CIO UK podcast to discuss digitisation, the sustainability agenda at the Natural History Museum, and the social, scientific and global role the institution has beyond its duties of archiving and displaying its vast collection.

Speaking with CIO UK Editor Edward Qualtrough, the trio also discussed some of their favourite memories and displays at the museum, while former CIO 100 high-flyer Davis shared the value of CIOs having their team and organisation recognised in the annual 2020 CIO 100 celebration showcase of technology leadership and initiatives.

Previously CIO at the Francis Crick Institute, Davis said that the new CIO role allowed her to take a very strategic approach to delivering on the organisation’s goals and mission, and that her focus would be on digitisation, sustainability and data.

“Thanks to the work that Ian and Dave have done, the role’s been really defined as a CIO for the museum as a whole,” she said. “So that means that I’m not needing to spend time in the day to day IT operation as such; it lets me be very much more strategic, which is fantastic and a great opportunity.”

Davis said that her team would be continuing the digitisation of the collection, which started under Thomas and was continued by Golding, and was excited about the opportunities in how her team and the organisation was creatively using data.

“We also are working on the museum’s sustainability agenda,” she said. “So the museum is very keen to be a sustainable organisation in its own right.

“We have declared a planetary emergency and we know that we’re losing species. We all need to make a step change in what we do for the environment.”

Davis added that all CIOs had a role to play in the developing and delivering the sustainability agendas at their organisations – particularly involving procurement, the carbon footprint of the tools CIOs provide, to using analytics to enable other parts of a business to advocate for sustainability.

A former CIO 100 high-flyer, Davis also encouraged her peers to put false modesty aside and consider putting their teams, their organisations and indeed themselves forwards for 2020 CIO 100 recognition.

“I think there is huge value in being in the CIO 100,” Davis said. “I find it personally quite difficult, and I understand why people find it difficult to put themselves forward for these things.

Davis added that the confidence and credibility boost it offered to a technology, digital and IT team was also a significant boon.

“The other spin-off benefits that I found from being CIO 100, that I hadn’t really anticipated, was that the value my team put on it,” she said.

“I was always a little bit worried that this felt a bit individualistic, and when I was at The Crick it was very clear to me that I wasn’t achieving any of this on my own – that you only achieve this by having a fantastic team behind you. And therefore it feels a bit unfair to being recognised as an individual.

“But actually, I think that the team did take it as a team recognition and they also appreciated the external visibility that recognition gives for the work that’s going on in the organisation.

“That external visibility is increasingly important for the recruitment message as well.”

‘Advocates for the planet’

Golding reflected on his time in Kensington, particularly helping the Natural History Museum create its digital twin technology vision, and “connecting the technology – that includes data, digital and IT – to the museum’s new strategy”, adding that he was delighted that Davis was taking on the mantle of the new museum CIO role.

The CIO for six years from 2012 to 2018, Thomas said that his fondest memories of his time at the Natural History Museum were being able to see the impact it had on its visitors, and that his CIO successors were continuing to advocate the relevance of the UK’s cultural sector.

“I think my fondest memory is tripping over school kids with big, wide eyes looking at the wonder of nature and the cathedral of nature,” Thomas said. “It is a wonderful building, but just about everything that’s in it has a story and can inspire the children.

“I’m just delighted that such fantastic people and moving it forward because it really matters. This place matters and museums and cultural heritage matters to the UK.”

Davis amplified those sentiments, adding that the impact the Natural History Museum wanted to have on its audience, both those who are able to visit physically and those who can engage with the museum’s stories from all over the world.

“It’s not just about visiting the museum and seeing the dinosaurs; it’s about people really understanding what’s happening to the planet,” Davis said. “We want to create advocates for the planet.

“I think it’s vitally important that through the work of the museum, we create advocates for the planet. It’s something that motivates me. And I just wish more people will come and see it because it is a fantastic place to be. It’s a privilege to work here.”