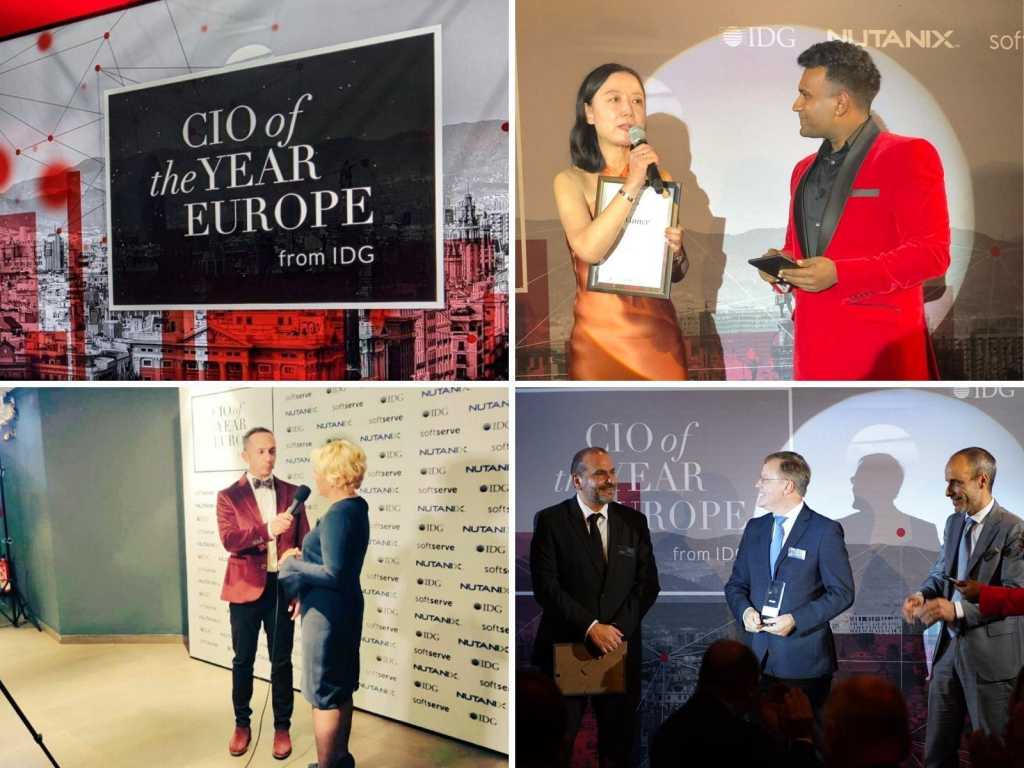 Europe’s 10 leading CIOs were recognised at the inaugural CIO of the Year Europe gala in Barcelona tonight, celebrated for their work as business technology executives, and their innovation, diversity and sustainability initiatives.

Chief Information Officers from eight different European countries made the final list of the continent’s best, being praised in a variety of categories including diversity, innovation and sustainability. They received their CIO of the Year Europe awards at a lavish gala dinner.

The five category winners were:

London-based Chris Zissis, CIO – Capital Markets and Valuation Advisory at JLL, flew the flag for the UK and was recognised in the innovation category; while UK-based technology leaders from Yodel, Hovis, Rentokil Initial, Avant Homes and Horwich Farrelly had been shortlisted and joined the celebration dinner in Barcelona.

Equinor CIO Åshild Hanne Larsen won the CIO of the Year Europe – Large Enterprise award after a career journey from cleaner and catering assistant scrubbing cabinets on offshore rigs 26 years ago, to CIO and SVP of the $61 billion revenue Norwegian energy company. Hanne Larsen was recognised ahead of Fernando Lucero of Iberdrola, Spain, and Carlo Bozzoli, CIO of Enel in Italy.

Congratulating Hanne Larsen, Wendy Pfeiffer, the Nutanix CIO and a judging panel member, praised her mix of adoption of modern technologies, from enterprise-class to consumer-grade.

“That’s what great IT does: adapts technology from every sector to meet the operational and business needs of the enterprise,” she said.

CIO UKEditor Edward Qualtrough, a fellow jury member added that Hanne Larsen’s work had not only transformed Equinor but enriched the wider tech and business landscape in Norway and beyond.

“Working with the board on digital business innovation, democratising data across the company, and empowering bottom-up innovation is having a huge impact at Equinor,” he said.

“But it’s the impression the CIO is having outside of her own organisation which is perhaps most impressive – Microsoft has opened two data centres in Norway based on its relationship with Equinor and Åshild, with the new regions set to have a beneficial impact for the Norwegian business landscape.

“Further, some 80% of startups that went through the Equinor Techstars Energy Accelerator programme have signed contracts with major energy companies, averaging around $2 million each in funding after coming through the initiative.”

Tesco CTO Guus Dekkers praised Bankdata’s “simple, innovative solutions which have gained traction with customers, as well as its ‘governance model to drive innovation that assures accountability’,” during the judging.

Morten was followed by Marabu CIO Stefan Würtemberger, who was recognised for the work done with his team in his previous role at Renz.

Sacyr CIO Victor de Ávila Rueda scooped the Project of the Year Europe – Innovation in IT and Business award, the CIO at the Madrid-based construction company earning praise from Pfeiffer for his talent swarm concept and for solving problems in real-time by bringing together experts in a somewhat gamified environment.

“The fact that serious issues are resolved is so impactful,” she added.

In the Project of the Year Europe – Diversity in IT and Business category, judges gave the award to Miao Song, CIO of Mars Petcare in Belgium.

“As Global CIO at Mars Petcare, Miao Song has moved well beyond the ‘why’ to the ‘how’ with a series of programmes that are helping move the needle in the diversity of her IT organisation at a senior level, nurturing the talent pipeline entering the technology sector, and with initiatives from her function radiating beyond IT into other areas of the business helping to build a more innovative culture and improve employee satisfaction,” said Qualtrough.

Piotr Slomianny of Miejskie Przedsiebiorstwo Wodociagow i Kanalizacji in Poland won The Project of the Year Europe – Sustainability in IT and Business category. The judges commended his use of technology to reduce water losses and pipeline failures while increasing organisational efficiency and customer satisfaction at the Municipal Water and Wastewater Company in Wrocław (MPWiK).

“His vision is to reduce water losses to 0% by 2040,” said Qualtrough. “Working in partnership with the private sector, the utility company’s SmartFlow technology which reduces water losses is being commercialised in a way which could have huge benefits beyond Poland.

“With water scarcity impacting cities globally, Piotr and MPWiK’s focus on sustainable water management ‘for today’s needs as well as for future generations’ are hugely commendable.”

About CIO of the Year Europe

For more than 15 years, IDG’s CIO brand has been recognising CIO excellence in more than 20 key markets across the globe.

The CIO of the Year Europe awards were launched to honour the heroes of IT and business as a model, and to act as an incentive for the next generation of IT executives and transformative business leaders.

This event in 2019 is the first time that IDG’s CIO brand has rewarded CIOs on a pan-European level. The awards are an IDG collaboration featuring CIO editors from Germany, Spain, Netherlands, Sweden, France, Italy, Poland, Czech Republic, Denmark, Turkey and the Benelux region.

“It’s been a privilege to work with my colleagues from sister CIO titles across Europe on this initiative which has helped bring together some of the continent’s leading CIOs and CTOs,” said Qualtrough.

“At a time when there are shifts to become more inward-looking, the CIO of the Year Europe is distinctly European and recognises organisations and individuals tackling some of the continent’s biggest challenges, whether they are related to sustainability, diversity or innovation – and truly celebrates what it means to be a modern business and technology executive.

“Satisfying the CIO of the Year Europe jury is a real achievement, so congratulations in particular to our five category leaders, and indeed to all of the shortlisted and commended technology leaders along with their teams and the IT ecosystem supporting them.”