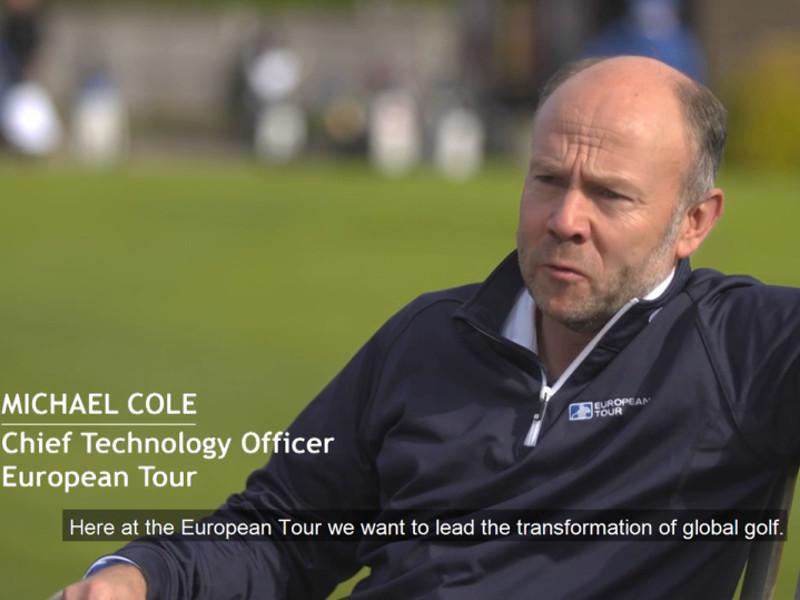 European Tour Chief Technology Officer Michael Cole is pushing on from the organisation’s successful Ryder Cup delivery by trialling new technologies which he hopes will create immersive, connected experiences to continue to drive the transformation of global golf.

At the 2018 Ryder Cup CTO Cole and his team worked with partners HPE and networking infrastructure provider Aruba Networks, which Cole described as “the biggest investment in technology we have ever made for a Ryder Cup”, to provide a WiFi and IT infrastructure which would help fulfil his vision of creating a truly connected golf course and be a significant part of the digital transformation of the sport.

With barely a fortnight to toast Europe reclaiming the trophy from the United States under the leadership of captain Thomas Bjorn at Le Golf National near Paris, the European Tour was working on a 360-degree, virtual reality proof-of-concept with Tata Communications at the British Masters in Surrey.

“The particular proof of concept for the British Masters is around the use of 360-degree video capability; it’s 8k ultra-high-definition, and really using the technology to enhance the spectator experience that we offer, not only for spectators coming to the course but equally for spectators around the globe,” Cole told CIO UK.

Cole said that the pilot was about creating experiences for fans which were not available through conventional broadcasts, and although initially only for use on-site the European Tour hopes that the capability will eventually be accessible to a far wider audience.

“The ultimate success is speaking with the intended audiences,” Cole said. “My aim is very much to ensure that we adopt what I call the ICE principle – which is Immersive, Connected Experience.

“If we can ensure that the content is compelling and drives through that immersive experience and connectivity ensures that people feel always connected, then we will achieve a great deal of success in doing that.

“One element of success is how we’re bringing new spectators or new fans into the sport through a widening of interest and the broadening of almost entertainment that’s going to make it compelling for new fans to enjoy what golf has to offer.”

Indeed the technology investment in golf forms part of Cole’s objectives to develop new audiences based around an improved fan experience under CEO Keith Pelley. The former president of Canada’s Olympic broadcast media consortium for the 2010 Winter Olympics in Vancouver, Pelley has instilled a new ethos at the European Tour to see the organisation primarily as an entertainment company – a concept Cole buys into.

The CTO warned however about moving too fast with innovations that were not ready, or forcing them on audiences who were similarly not prepared for significant changes to their sports.

“One of the greatest challenges any CTO in the world of sport has is meeting the ever-increasing demands of spectators,” Cole said. “The bar is being held increasingly higher. Every event is expected to be far greater than its predecessor, and that is putting particular demands on the adoption of technology within that particular environment.

“It’s really about keeping in line with our overall vision while ensuring that we are meeting the increasing demands and expectations of spectators, and utilising proven technology while being seen as innovative within our sport.”

Tata Communications was announced as a European Tour partner in November 2017, and Cole is hoping to tap into their expertise in other sports and sectors.

“One of the key benefits we have in working with great partners like Tata Communications is we can take their global expertise in technology, in digital transformation and global connectivity, and we can also take their vast experience in the technologies that they apply successfully in other sports such as Formula One and MotoGP, and to take that learning and apply it to golf as we enhance our global vision,” Cole said.

At the 2018 Ryder Cup, Cole explained to CIO UK how the European Tour was hoping to build on the increased levels of engagement seen in Versailles and replicating that across the rest of its tournaments.

“We would love to encourage a similar audience across our entire schedule and technology has a key role to play in that,” he said as he described the HPE Aruba partnership as being a much deeper relationship than a one-off investment for the European Tour’s biennial, blue riband event.

“One of our underpinning principles is that I want people to feel like they are connected with the content, I don’t want them to feel like they are connected with technology. Technology should be seamless. They should be able to come on to the WiFi or download the app and the seamless vision of the services is ultimately what we want to provide across all the interactions we have, whether it’s the Ryder Cup or it’s the European Tour.”

Cole also shared his views on emerging technologies, and how there was a drive in the organisation for the European Tour to be seen as sporting innovators.

“With technologies like augmented reality, if it can enhance that experience – if I can turn the casual fan into a superfan by creating that engagement then I know that technology has been a success.

“Fundamentally technology has a key role to play in the transformation of global golf. You’ll see reference to us being an entertainment player where golf is our product. One of the things CEO Keith Pelley and the rest of the leadership are keen to be is really be the innovators in golf. And be the innovators in sport.”

“One of the areas I’m most excited about is data,” Cole said. “Data has been at the heart of our game, actually since 1972 when we first started to collect data from the course. Clearly that has increased quite significantly.

“In 2017 typically we’d be collecting around 26,000 data points in any given tournament. In 2018 we already collect seven times the amount of data than we did previously, and in 2019 we will collect even more data. And in real-time, shot by shot, too.

“The opportunity for us to analyse that data through machine learning and apply that through a cognitive approach opens up many new doors for us, both in terms of fan engagement but also through player performance and coaching, and those are areas that we are absolutely committed to exploring into the future.”