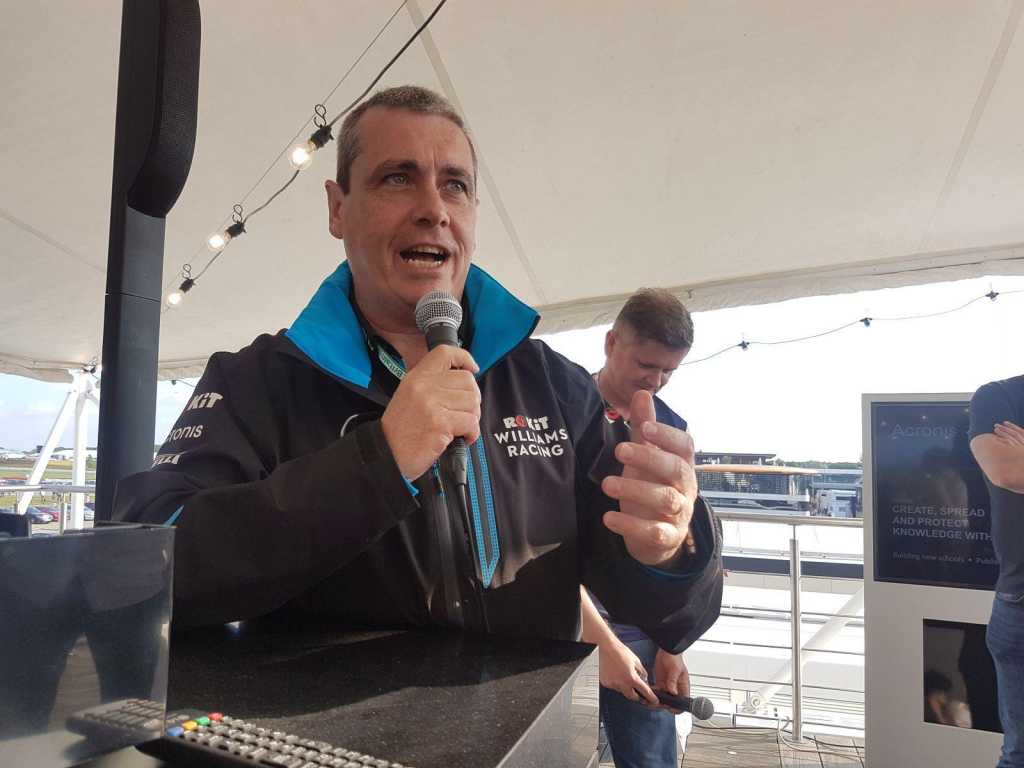 In the 22 years since Graeme Hackland began his career in Formula One, developments in technology have consistently transformed the sport.

Regulatory body the FIA has introduced innovations including a DRS (drag reduction system) that promotes overtaking, a Kinetic Energy Recovery System (KERS) that converts stockpiled energy into an acceleration boost and a Halo cockpit protection device. But for Hackland, the biggest developments revolve around data.

When Hackland took the job of network support analyst in Lotus’ Benetton Formula Ltd brand in 1997, all of the data from the team’s two cars could fit onto a single floppy disk. Nowadays, a team can generate more than 200 gigabytes of data over a race weekend.

Rokit Williams has 300 sensors on each of its cars and collects over 1,000 channels of data throughout the race to understand the effects of the weather, track conditions, car parts and competitor performance.

“Friday first practices are the most important in terms of the development of the car,” Hackland explained after the practice session for the British Grand Prix.

“We will put parts on the car and we want the drivers to drive every lap almost the same so we know that if the lap time is different it’s because of the part that we put on the car, not because they were driving differently.

“We use the data we get on the Friday to help us to drive the development of the car for the future but also to improve the car over the course of the day.”

This data helps guide the strategy for the race on Sunday. Williams runs 10,000 race simulations to try to predict how it will unfold, but with 20 cars on the track, anything can happen. A crash on the first corner or the arrival of a safety car to guide the cars around the circuit until the damage is cleared can scupper even the best-laid plans and create an unforeseen needs for a pit spot or a change of tires.

“We come up with three or four scenarios we can discuss with the driver based on the real-time data analytics and then make our decisions,” says Hackland.

All the insights are fed back to the Williams factory in Grove, Oxfordshire, where further data is generated in massive simulators that helps the team prepare for the next race and for the regulatory changes that will come in the next season.

This collection of data contains highly valuable information that has made Williams the victim of two attempted ransomware attacks in 2014, shortly after Hackland had joined the team from Lotus. Williams escaped the first thanks to its backup recovery, but lost some of its data as a result of the second.

Hackland responded by developing an ecosystem of partners around cyber security and deployed the Acronis hybrid cloud data protection solution to protect the team’s data backup and help it detect, terminate, and recover from ransomware attacks.

Hackland’s vendor strategy mixes the stability of established suppliers on race weekends with the more experimental technology of smaller companies away from the race, a number of which were tested with the Williams F1 eSports team.

“Here at the track, we absolutely stick to tier one. I need it to be 100% available for five days and then pack it up and either drive it in a truck to another track or stick it in an airplane. So we are very much tier-one vendors at the track,” he said.

“Everything else we willing to push the envelope wherever we can get the best performance.”

Williams has had a fabled history in F1 but a difficult start to the 2019 season.

Hackland is confident that the team’s fortunes can change fast if it maximises its resources, as his rivals at McClaren are currently proving by outperforming the Renault team that supplies its engines, despite losing former world champion Fernando Alonso to retirement.

One of the ways Hackland believes Williams can get an edge is by using AI to make faster decisions during races.

“It seems like the rulebook is very complicated,” he said. “We got a penalty this year, because we sent a car out of the garage a few seconds before we should have done. I think with AI and some of the automation, we might be able to stop that.”

Hackland is also investigating whether Williams could bring a 3D printer to the track that would allow the team to print out new parts based on what they discovered during practice and then add them to the car before the race began.

“When we’re in Australia, we know that if we’re going to put anything on the car on Saturday, it has to leave the UK Tuesday night. That’s the only way it’s going to make it to the car on time.

“But if we could discover something on the Friday in Australia, print it overnight, by either using a local supplier or printing it ourselves, and then put it on the car, that’s going to be huge.”

Formula One has been criticised for its reliance on fossil fuels and lack of female drivers, but technological developments offer hope of change.

This year’s launch of the all-female W Series is providing exposure for female drivers, and a growing number of them are being employed as development drivers, such as Jamie Chadwick, who joined the Williams Driver Academy this year.

The physical demands of driving an F1 car have often been cited as a key reason for the dearth of female drivers, but Hackland believes the biggest factor is their lack of financial support.

“I think the cars through the 80s required a lot of physical manhandling, but even then there were women racing drivers who handled those cars without a problem. The problem actually is not about the ability to drive a car, it’s the opportunities that they get,” he said.

“Jenson Button said, there were three female drivers when he was starting who were quicker than him, but they never made it to Formula One. They never got the sponsorship that they needed to make it their way through.”

Read next: Arsenal IT Director Christelle Heikkila explains the role of data in football

The transition from fossil fuels to alternative energies may also be approaching. The Formula E series has proven that electric-powered cars can make for exciting racing, and F1’s cars have maintained their speeds through the sport’s shift to hybrid power.

“Will we go full electric? I don’t know,” Hackland admits. “I don’t think in the short term, but the way society is going, there’ll probably come a point at which using petrol is not tenable.”