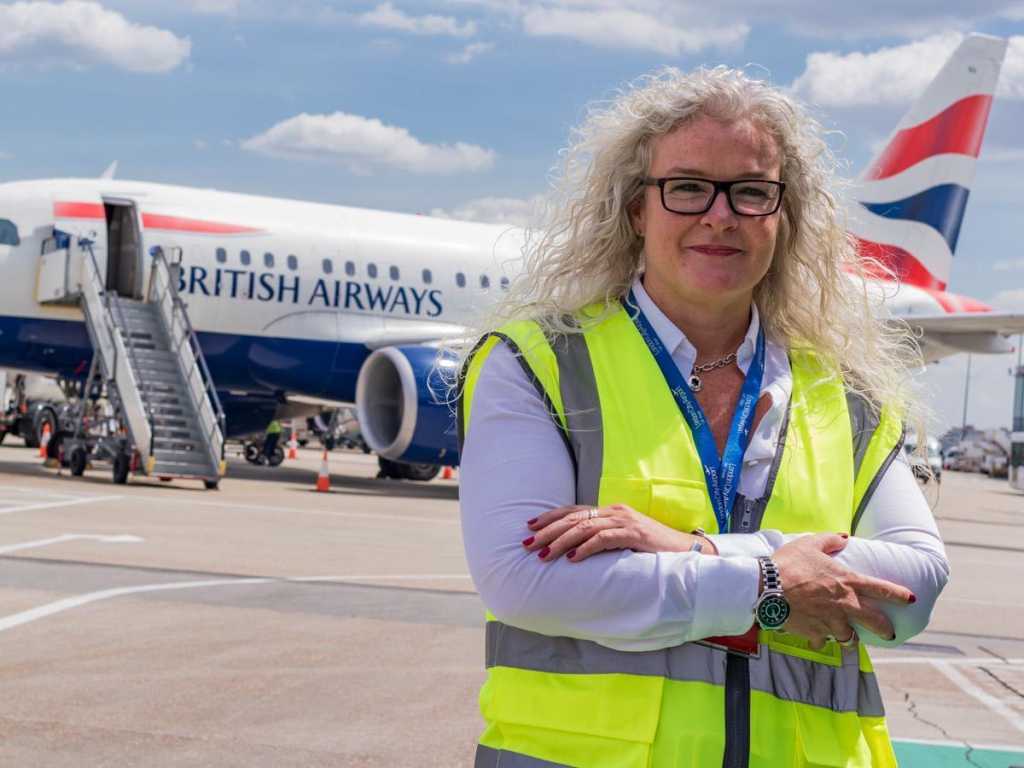 London City Airport Chief Operating Officer Alison FitzGerald is preparing the company for the next phase of its growth – a significant terminal and capacity expansion – all while maintaining the airport’s ethos around a swift and seamless customer proposition.

Situated in the Thames estuary, the airport has seen an enormous passenger increase in recent years. Opened in 1987 and designed for around 100,000 passengers a year, London City Airport serves 4.5 million passengers annually half of whom are leisure rather than business passengers – with much of the increased use coming in the last decade.

“The surge in demand, which has risen by 50% since 2012, means we have had to become a smarter airport so that we can maintain what we are best known for – our award-winning passenger proposition,” FitzGerald said, which she defined as a 20-minute passenger journey from the front door to departure lounge, and 15 minutes or less from plane to train upon arrival.

LCY, its three-character international airport code, has a number of significant idiosyncrasies based on its geography in the Royal Docks, FitzGerald explained. In close proximity to the tall buildings in London’s Canary Wharf district less than three miles to the west, its runway lies on a west-east axis on an island in the River Thames. Depending on the wind conditions aircraft can take off and land in each direction, but must approach or climb at a much steeper angle of 5.5 degrees if flying over central London, compared to the usual three degrees when taking off towards or approaching from the Thames Estuary to the east. To account for this the aircraft are specially modified, and all pilots undergo special training and have a licence that allows them to fly to and from LCY.

London City Airport is at full capacity in its morning and evening peaks, and FitzGerald explained its £480 million development programme and expansion plans which involve significant dredging and the laying of foundations in the Thames to create new land, with rigs piling in sand to increase the size of the dock to the west.

“We are quadrupling the size of the terminal,” she said.

Recognised as a high-flyer in recent editions of the CIO 100, FitzGerald said that the airport would be building seven new aircraft stands and a parallel taxi way; currently aircraft have to taxi down the runway from west to east in order to take off in that direction. This will increase the number of possible movements an hour from 40 to 45.

With work scheduled to be completed by 2022, much of the capacity will be released earlier in the summer of 2021 when new stands for aircraft become available.

The biggest innovation as part of the expansion, and certainly the one that has received the most attention from the press, is LCY’s new ‘digital control tower’.

With construction currently underway, the new aircraft control tower will relay an augmented reality 360-degree view to a state-of-the-art operations centre staffed by air traffic controllers more than 90 miles away in Hampshire.

FitzGerald was described by London City Airport as the “driving force” behind the plans which it described as “the future of air traffic control” as LCY looks to create a “truly 21st-century airport for London”.

The COO said that it was on course to be ready as planned for December 2019, although will not go live officially until January 2020 after the busy Christmas period.

“When the digital control tower is introduced in 2019, the greatest benefits lie in the additional technology designed to support the controller, with a wealth of real-time information at their fingertips,” FitzGerald said.

“The 360-degree view of the airfield from the cameras will be streamed via superfast secure fibre connections to the control room, and presented on HD screens in a seamless 270-degree format – so controllers can literally see what’s behind them.

“Supporting what the controllers see will be an incredible set of tools and sophisticated options to augment the live view of the airfield with addition data. For example, they will be able to overlay aircraft call signs, tag and track moving objects – from helicopters to drones – and add on-screen labels to mark out taxiways.”

FitzGerald said that the digital air traffic control tower was a crucial asset in LCY increasing its hourly movements, and that the organisation would be working with its camera provider and NATS for a year to ensure the project is set for launch.

Allaying any fears the public may have, FitzGerald said that the introduction was better for security.

“We believe it will improve the safety on the basis that we are augmenting our air traffic controllers’ visibility today with many more tools, and much more sophisticated camera technology, and something that gives them further sight and earlier sight of anything that’s in the air space that shouldn’t be,” she said.

FitzGerald was appointed CIO for London City Airport in January 2014 following a career in media and financial services organisations. She took on Chief Operating Officer responsibilities in April 2016 alongside the CIO duties, with the COO role made permanent in October 2016.

Sitting on the board of directors and executive leadership, FitzGerald reports to the Chief Executive and shareholders, and explained the baptism on her first day in the COO role when protesters had sailed a dinghy across the docks and landed on the airfield. The former CIO is the holder of the airport’s operating licence as its day-to-day leader as this always sits with the operational lead rather than the Chief Executive, and as such had direct responsibility for the situation.

“I got a call I think a little bit before 5am to say that we’ve got protesters on the runway,” she said. “To start with I thought it was a wind up, but very quickly realised it wasn’t.

“I was here within minutes, and then was on the airfield with the Metropolitan Police and then their team.”

The #BlackLivesMatter protesters, who were drawing attention to air pollution which disproportionately affects people of colour, had erected a tripod to which they had chained themselves. While the police have a specialist team to deal with the situation, FitzGerald explained how LCY also had a duty of care to the protesters and was then focused on getting the airport back up and running.

“Within minutes of the last protester being removed, we’d swept the runway clear and completed a security sweep. We’ve done that and we were open again. But as you can imagine, we had the CAA involved and the DFT, all wanting to know how and why it happened, and how do we prevent that moving forward.

“That led to our security improvement programme and then investment in technology, people, processes, so we have full 24/7 security cover, with new CCTV and a state-of-the-art control room.”

With so much building infrastructure taking place at London City Airport, FitzGerald’s major focus is always on the customer experience and the passenger journey.

“We have our customer proposition,” she said. “Our passengers, beyond anything, tell us that the most important thing to them is punctuality and reliability.”

FitzGerald and her team are working on how they can turn aircraft around as swiftly as possible – the time from disembarking the aircraft to having it ready to board again. A process that includes ramp services, baggage handlers, fuelers, caterers – and the airport has invested in handheld devices for some roles and visible screens so all parties can check on progress as they seek to get it below 30 minutes.

London City Airport broadly boasts it is the most punctual airport in the UK based on arrivals and departures, and FitzGerald said that self-service bag-drop and common IT infrastructure and services provided by LCY to make the passenger journey as smooth as possible.

“It was a big sell to the airlines, and because we had done the investment we’re not charging them – and if we encourage them to use automation then it benefits the passenger,” she said.

“Also, with some of our smaller airlines, they don’t have the internal IT capability to develop this kind of solution themselves, or invest in it either. We saw a bit of a change in approach, as it meant that we’ve got much more of a take up. Checking in for self bag drop is less than a minute; that’s been a real game changer for us.”

With the new terminal FitzGerald said that the organisation was working on the design and how technology will be used to facilitate a better experience for passengers, particularly with regard to mobile and what the digital experience might look like in 2022.

London City Airport leans heavily on its technology partners to run its complex operation. The management of its infrastructure environment is outsourced to Telstra, having worked with the airport on its data centre consolidation which had previously been on the site with limited resilience and offering London City no opportunity for growth.

Now off-site with “diverse rooting, full back-up and resilience”, the COO said that this technology project provided the platform for its current and future plans.

FitzGerald said that one of the biggest benefits of the Telstra relationship was enabling the LCY team to focus on business change rather than IT management.

Startups also have a role to play, and FitzGerald and her team are trying to tap into the startup innovation ecosystem in London and beyond.

“Because London City is a medium-sized business we have the advantageous capacity to adopt technology with relative ease which improves our airport, the business passenger experience, and sets a global aviation standard,” FitzGerald said.

“The airport is in close proximity to one of the most thriving tech communities in Europe. The talent to come up with new ideas is on our doorstep.”

While Crawley-based Avtura were LCY’s partners for the handheld devices and software for its ramp services and baggage handling agents – a system adopted by the airport’s biggest customer British Airways – Greenwich-based startup CrowdVision began a collaboration with London City Airport to provide the camera technology to accurately measure passenger journey times. London City Airport was the first to use CrowdVision, which now has a number of airport clients, including Heathrow.

In the context of airports security has a whole host of connotations, and as CIO who made the leap to Chief Operating Officer FitzGerald treats physical and information security as an interconnected whole.

London City has what FitzGerald calls a “virtual CISO”, while the organisation conducts regular external penetration testing and uses a host number of external services for audit, best practice, and support – building a culture around physical and cyber security rather than having one person in the team that’s dedicated to information security matters.