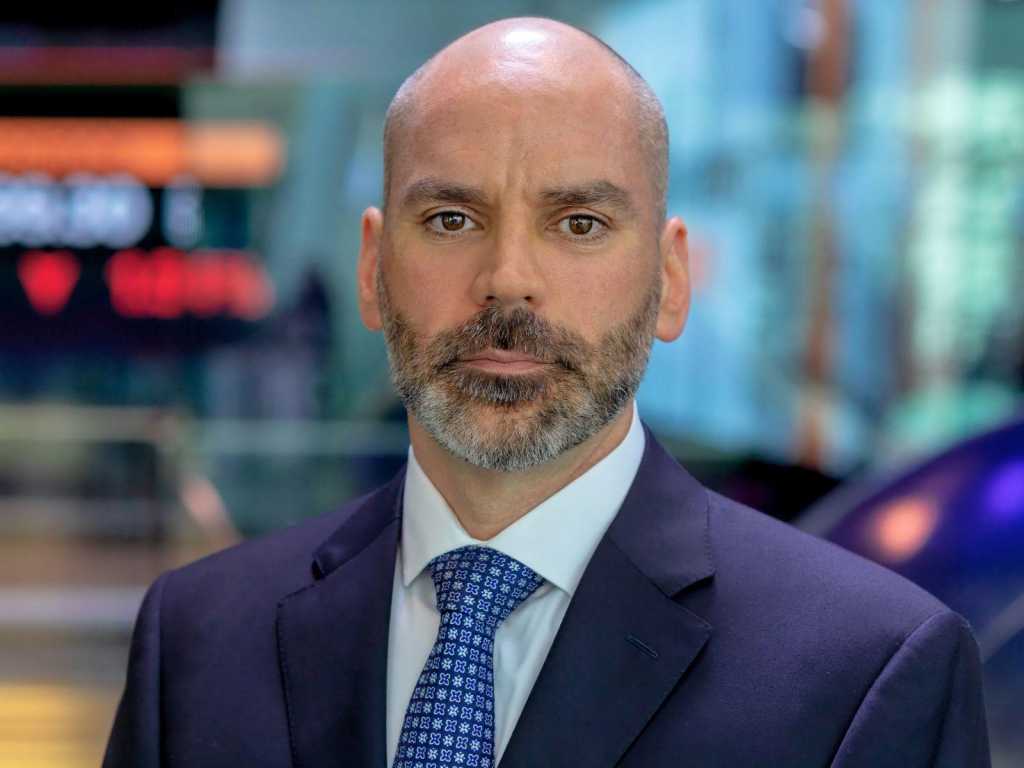 The Bloomberg business empire has been built on technology since its foundation in 1981, when future billionaire New York mayor Michael Bloomberg was fired from his job at an investment bank and used his savings to develop computer systems for financial analysts.

For the last decade, the company’s technology strategy has been overseen by Global Chief Technology Officer Shawn Edwards.

Edwards is responsible for developing new tech for the company and its clients and enhancing the core product in the business: the Bloomberg Terminal, a financial information system installed on more than 325,000 desks around the world.

His team of network engineers, UX designers and programmers works with Bloomberg’s global engineering group to build proof of concepts in the lab. The best of them are developed into new infrastructure and end-user products.

“We focus on areas that we collectively agree are important to us,” Edwards tells CIO UK under a ceiling of aluminium petals that light the cavernous confines of Bloomberg’s new £1 billion European headquarters in the City of London.

“What’s important to us? It’s typically about the problems we are trying to solve, the changing environment for our clients, and how we can build systems that they haven’t even dreamed of, and solve direct problems.”

The team’s recent solutions include an App Portal that clients can use to develop applications that connect to Bloomberg’s systems, a data science platform for building machine learning models, and a quantitative financial analysis environment that sits inside the Terminal.

The ideas are developed on an informal basis that allows them to grow organically through regular discussions but the strategic tone is set by an executive committee headed by Michael Bloomberg.

After three terms as New York City mayor, the 72-year-old returned to the position of Bloomberg CEO in 2014, and reassumed a hands-on role with the company’s technology strategy.

“We chat with Mike all the time,” says Edwards. “He’s hands-on about the funding of various things, and what’s important and what’s not important. He’s very involved in some of our push to incorporate a lot more machine-learning into our strategy, in security and all sorts of things.”

Edwards is a Columbia University graduate who still calls New York home, but has just jetted across the Atlantic to Bloomberg’s new European base in London, which recently won the Stirling Prize for the UK’s best building.

The building’s blend of innovation and an open culture reflects the requirements that Edwards has of his engineers.

“Bloomberg is not a place for everybody,” he admits. “We have to be careful in who we hire. It’s very important to have people come to visit us and do the interviews here. We show them how we work. You just walked past a bunch of people working in an open environment. I always express that it’s a place where you’re expected to help.

“You could get a tap on the shoulder and say, ‘help me out with this here’. I joke sometimes that it’s like a push-down stack. If somebody else puts down something else, you’ve got to go help them, and you’ll get help back. You’ll pop the stack and get back to what you were working on later. It’s really collaborative.

“Sometimes it’s a really interesting dynamic, intense environment. Sometimes it’s heads down and you’re coding. You have to be able to switch through all that. We’re juggling a lot of products. We have more good ideas to work on than we have resources to work on, which is always a good place to be.”

Edwards boosts the retention rate by seeking out new recruits that are passionate about the work done at Bloomberg, but he still has to deal with the same skills shortage that affects every IT business leader and forces numerous companies to vie for the same talent.

Bloomberg overcomes this through an intense recruiting effort on university campuses and collaborates with academia to supplement the work done by permanent staff.

The relationship with academic institutions helps internal staff understand the latest developments in technology, and if something shows particular value Bloomberg will fund further research.

Students and their professors benefit from the support, while Bloomberg can test out its data and receive new software in return.

The approach also taps into the talent pipeline.

Bloomberg offers a fellowship programme that funds PhD research by students who then intern at Bloomberg offices for a summer and may receive a job offer if they can prove their value.

Edwards admits that employing top IT talent can create another challenge if they get lost in the tech rather than focus on the solution.

“We’re not building technology for technology’s sake,” he says. “We’re not a Watson Research Centre or the old Bell Labs. I admire them, but they are research labs doing fundamental science and engineering. We’re producing solutions for customers. I think that’s true for almost all departments: remember what you’re trying to do, focus on it, and iterate quickly.”

Edwards is an advocate for open data and open source. He spearheaded the development of Bloomberg’s Open Market Data Initiative (OMDI) and its Open API framework.

Bloomberg built up its open source office very carefully after investigating how to engage with the community, which institutions to approach, and all the licensing issues.

The company uses open source software and contributes to open source projects that are relevant to the business, such as the Apache Solr search engine, for which Bloomberg developed a machine learning ranking system that is embedded into the search results.

“That only happened because we participated with them for quite a while,” says Edwards. “We proved ourselves. We were good sponsors. We started showing value, and then we got the rights to be a contributor. Some of these are long-term engagements, and you have to be patient. This is not a vendor relationship. You have to give back and you have to contribute.

“Do it deliberately. Don’t do it ad hoc. Build a real programme office and have somebody understand the workings of an open source project.”

Bloomberg also works with startups and invests in some of them through the Bloomberg Beta B2B venture fund.

This has brought in new capabilities from the likes of Textio, a machine learning system that scans job postings and highlights words that might put off diverse candidates, but Bloomberg tends to avoid acquiring the startups it supports.

“Bloomberg is not really a company that goes and buys a lot of companies,” says Edwards. “We have in the past. We’ve done some big deals, but we don’t acquire a lot of tech companies. We’re organically growing, but we have used some of their startups that they have pointed us to, and used them as vendors. We’ve seen some really good talent from those.”

Bloomberg is a very different organisation to the one founded in 1981 but the company’s biggest source of revenue remains the iconic Terminal that it launched in its first year.

The constant addition of new capabilities helps the Terminal keep up with the emerging competition from cheaper, specialist alternatives.

“The mission is to keep adding value,” says Edwards. “The Terminal that would have existed five years ago is not worth the money that companies are spending now for it. We constantly have to add value. Five years from now, it’s going to be very different.”

He adds that the Terminal serves many different needs.

Machine learning plays a key part in the Terminal’s development. Bloomberg has created a range of tools and techniques that are changing how clients use financial information.

They now rapidly receive high-quality data that’s automatically extracted from text and tailored to their requirements.

“We know your portfolio – it’s in our system,” says Edwards. “We know who you are, we know what kind of role you play, we know the functionality that you use, so we can target information to you in a really, really powerful way. We can bubble up the events and the data that is pertinent and relative to you.”

Bloomberg is also offering new tools for customers that they can use to customise their buy and sell signals by adjusting Bloomberg’s assessments to focus on one sector, company or country.

Clients can tweak the system to find highly personalised insights.

A natural gas trader concerned that a storm would hit generators and cut off their power could combine Bloomberg’s data on weather, local population densities, and the geolocation of generators and tankers to model the likely shortage and its effect on gas prices.

Edwards says that his work on expanding client access to Bloomberg systems has only just begun.

“I want to make sure that every single data item in Bloomberg is modelled properly, is strongly typed, and has all this metadata describing that data,” he explains. “All that metadata and all of our ontologies are programmatically accessible by clients. Every piece of functionality and feature that we have that powers a terminal is accessible programmatically.

“This is kind of a new era for us. This is a big mission. It’s a big view and it’s going to take a while for us to add all of that, but we’re underway. We’re pretty excited about this view. It allows people to both use our terminal and our enterprise products, but also allows them to build their own view of the world and their own analytics, mixing in some of their own data in a way that they feel best suits them. It’s a view of leveraging the Terminal, and of leveraging all of the capability that we have. This is pretty exciting. This is a new thing that the CTO office started, and we’ve been spearheading, but it’s a neat and exciting thing – never boring.”