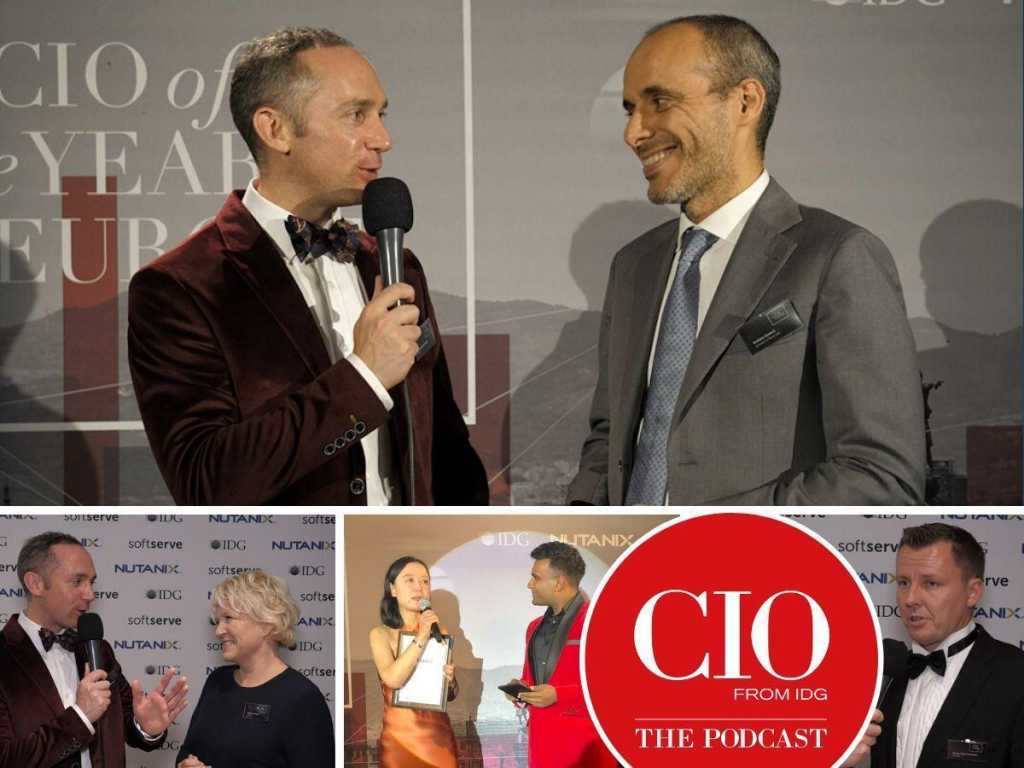 CIOs representing organisations from Norway, Germany, Spain, Italy, Denmark, Belgium, Switzerland and the UK spoke to the CIO UK podcast at the inaugural CIO of the Year Europe awards held in Barcelona in November 2019.

The first edition of the pan-European CIO celebration recognised 10 technology leaders from eight different countries, with category winners Åshild Hanne Larsen, CIO at Norwegian energy company Equinor, Bankdata CIO Morten Gade Christensen, Sacyr Chief Innovation and Strategy Officer Victor de Ávila Rueda, and Mars Petcare CIO Miao Song speaking to the CIO UK podcast about what their teams had achieved, the value of CIOs from across Europe celebrating as a group, and their priorities for 2020.

We also heard from CIO of the Year Europe jury member Michael Loechle, the CIO at ABB Powergrid in Switzerland, as well as the UK’s Dominic Howson and Chris Jekiel, technology leaders at Hovis and law firm Horwich Farrelly respectively.

[CIO of the Year Europe awards – Photos and highlights]

“As a team we have been very focused on trying to utilise technology to create business value. But really technology is just the starting point, it’s all about culture, leadership and capabilities when it comes to winning the digital transformation race.

“I think a big thing for us has been our strategic partnership with Microsoft because it’s enabled a lot of good things for the company. But as part of the partnership that Microsoft established two data centre regions in Norway, and getting that kind of infrastructure in place is a huge advantage not only for Equinor, but for the entire Norwegian ecosystem and the region that that is part of.

“I think the CIO role is no longer solely a technology leader. CIOs have to be business leaders and they have to drive for business outcomes.” Equinor CIO Åshild Hanne Larsen

“I think there are practically three main reasons we were able to win this prize. The first one is, this is a solution that goes beyond any traditional value proposition regarding digitisation. The second is that it goes beyond expectations and creates value to the business.

“Thirdly, this is a team-building process. It’s not the idea of one person – it is building up a value proposition that involves people from the operational side, people from the innovation side of the business, and we have been working with startups.” Victor de Ávila Rueda, Sacyr Chief Innovation and Strategy Officer

“Our work with establishing a new governance model that actually ties together the company and our customers is a big step forward. Combining this with innovation – we established a structured approach to innovation, starting to build a culture around innovation – and what I’ve seen in the last 18 months is how you can actually push this innovation towards the customers as well.

“As a CIO, you have to recognise you are part of a huge ecosystem, and you need to connect all the dots.

“CIOs are sitting on top of the biggest asset that the company has – the data. And I think it’s about time that we help to provide some revenue and some profit for the company. We need to commercialise this data.” Morten Gade Christensen, Bankdata CIO

“We transformed the airport from being one of the worst airports in Europe to being awarded as the best airport in Europe by Airport Council International for two years in a row. This was a very big change and that technology played a key role in this transformation.” Emiliano Sorrenti, Aeroporti di Roma CIO

“The priority for 2020 is all about retaining the really good people that we’ve got today that are developing the really cutting edge stuff that we’ve got going on at the moment – that’s key for me. We’ve got some really exciting stuff going on in terms of robotics and AI, and I want to keep that going and I need to keep those people. That’s my massive priority.” Dominic Howson, Hovis IS, Planning and Supply Chain Director

“The CIO of the Year Europe jury was looking obviously at the classic things any bread and butter a CIO would have to deal with. But on top of that it is the digital agenda, what sort of new technologies were applied? What specific leadership skills were needed for that? And what is the ability to actually manage the cultural change that is associated with it? Those were the key capability we were looking at.” Michael Loechle, ABB Powergrid CIO

“We’re not there yet but where we have achieved a lot is really building a purposeful organisation, to make sure that whatever we do, either the IT transformation or building new capabilities, is fully aligned with organisation’s purpose.” Miao Song, Mars Petcare CIO

“I think myself and my team are really proud of creating a plan and executing against that plan that is really pushing the boundaries. Lots of law firms struggle with change, and bringing in new technology and adopting that technology is a huge ask for for lawyers. Bringing those people along, there’s a lot of education that my team have to do and they’re just getting better and better at it.

“Without that team, I wouldn’t be stood here today.” Chris Jekiel, Horwich Farrelly IT Director

“My CIO colleagues and I have the same problem – to hire talent and to hold talent. People in the company are the most important thing.” Stefan Würtemberger, Marabu CIO