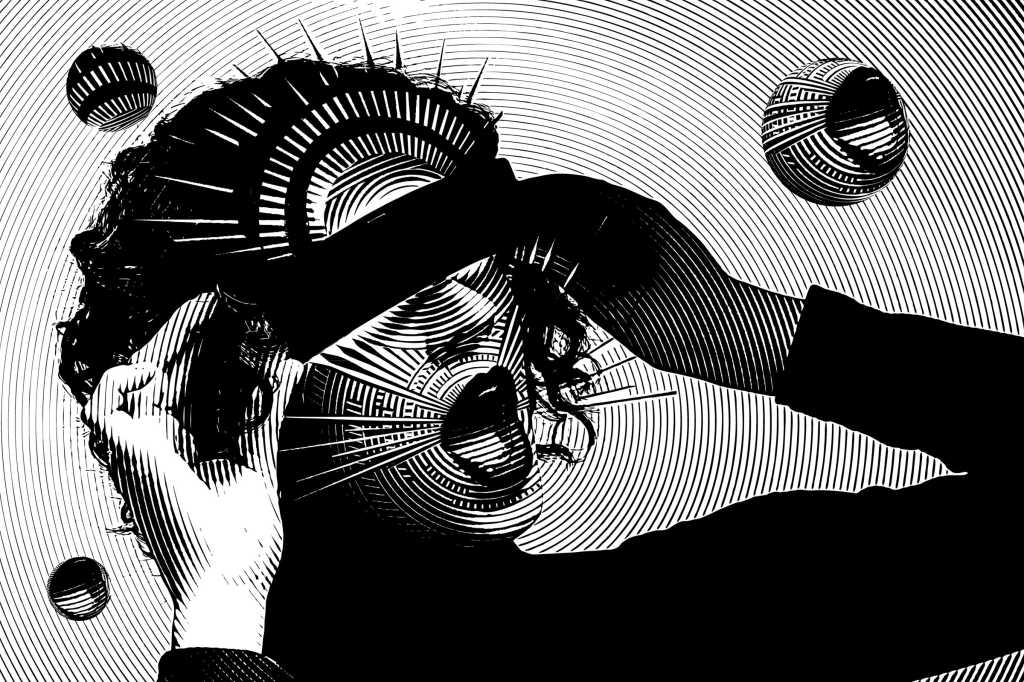 Famous mock musician David St. Hubbins once said, “There’s a fine line between stupid and clever.” On one side of the line is an endless celebration of genius. On the other: failure and ignominy.

In that light, here are seven next-horizon ideas that ride that fine line between amazing and amazingly stupid. The developers of these innovations might prove to be crackpots — or they could turn out be insanely great. The technology could end up being a blackhole for venture cash or a savvy play for business value emerging along the fringe. It all depends on your perspective.

Of all the out-there technologies, nothing gets more press than quantum computers — and nothing is spookier. The work is done by a mixture of physicists and computer scientists fiddling with strange devices at super-cold temperatures. If it requires liquid nitrogen and lab coats, well, it’s got to be innovation.

The potential is huge, at least in theory. The machines can work through bazillions of combinations in an instant delivering exactly the right answer to a mathematical version of Tetris. It would take millions of years of cloud computing time to find the same combination.

Cynics, though, point out that 99% of the work that we need to do can be accomplished by standard databases with good indices. There are few real needs to look for strange combinations, and if there are, we can often find perfectly acceptable approximations in a reasonable amount of time.

The cynics, though, are still looking through life through old glasses. We haven’t begun to ask the questions that quantum computing might answer. Once the machines are readily available, we might begin to think of asking the new questions. This is one reason why IBM is offering quantum computing toolkits — and certification for those who want to explore the outer boundaries of what the machines might do.

Potential first adopters: Domains where the answer lies in the search for an exponentially growing combination of hundreds of different options.

Chance of happening in the next five years: Low. Google and IBM are warring with press releases. Your team will spend many millions just to get to the press release stage.

Every decision made by a CPU sends a few electrons down the grounding wire and whatever energy they carried is turned into heat. Traditionally, these joules have been treated as waste and finding a way to get rid of this heat has been a headache for circuit designers, computer case builders, and colo architects.

Why not use it to heat buildings in winter? Why not replace the boilers and heat pumps of the world with miniature racks of servers pumping out heat? The people living upstairs would be grateful and welcoming. The compute jobs could migrate from north to south to north again with the seasons just like the arctic terns that spend half of the year in the northern hemisphere and half in the southern.

There would be a few challenges. If a warm front came through Vermont in January, the inhabitants would be turning off the “heaters” and decreasing the cycles available for AI researchers, data scientists, and everyone else buying spot instances. It could also mean installing twice as many servers or maybe shipping servers would be cheap enough.

Right now the cloud companies keep their servers in huge racks in central locations where the electricity is cheap. If they move them into residences, they can reuse the heat.

Chance of happening in the next five years:  High. Pilot projects are already being tested around the globe.

If the buzzwords “green” and “artificial intelligence” are good on their own, why not join the two and double the fun? The reality is a bit simpler than doubling the hype might suggest. AI algorithms require computational power and at some point computational power is proportional to electrical power. The ratio keeps getting better, but AIs can be expensive to run. And the electrical power produces tons of carbon dioxide.

There are two strategies for solving this. One is to buy power from renewable energy sources, a solution that works in some parts of the world with easy access to hydro-electric dams, solar farms, or wind turbines.

The other approach is to just use less electricity, a strategy that can work if questions arise about the green power. (Are the windmills killing birds? Are the dams killing fish?) Instead of asking the algorithm designers to find the most awesome algorithms, just ask them to find the simplest functions that come close enough. Then ask them to optimize this approximation to put the smallest load on the most basic computers. In other words, stop dreaming of mixing together a million layered algorithm trained by a dataset with billions of examples and start constructing solutions that use less electricity.

The real secret force behind this drive is alignment between the bean counters and the environmentalists. Simpler computations cost less money — and use less electricity which means less stress on the environment.

Potential for success in five years: High. Saving money is an easy incentive to understand.

Build your own cloud clusters

Yes, they’re little computers that cost less than $50. Yes, some 4th graders are wiring them up for science fairs. But just because they are cheap toys doesn’t mean that they can’t be quite useful for real work. That’s why some are building out Raspberry Pi clusters with racks filled with the little Linux nodes sporting chips with four ARM cores that sip electricity not chug it.

There are plenty of reasons to avoid the idea. Big, fat machines can be much more efficient. They can offer dozens of cores running dozens of threads and sharing big blocks of RAM and disk packs. When the loads get heavy, these can power through the work.

But working with smaller, separate machines offer redundancy exactly because they’re separate. You might think your instance is separate from the other virtual machines but they are all usually sharing the same CPU and there may be dozens or even hundreds of them. Separate machines with separate circuit boards offer security and redundancy. The biggest win, though, may be price. These clusters can be much, much cheaper than some of the instances in the major clouds. Sure, some cloud machines are just $5 per month, but after a year the Raspberry Pi can start to be cheaper.

Clusters like these allow massively parallel algorithms to run free. Many of the most intriguing problems require churning through huge collections of data and often the tasks don’t need to be done in order. These machines make it possible for programmers to not just think about inherently parallel algorithms but start building and deploying them.

The trend also follows the way that some major clouds are embracing solutions that offer hybrid options for moving data back on premises. Some want to save money. Some want security. Some want assurance.

Potential for success in five years: High. Clusters are already being deployed.

The weak spot in the world of encryption has been using the data. Keeping information locked up with a pretty secure encryption algorithm has been simple. The standard algorithms (AES, SHA, DH) have withstood sustained assault from mathematicians and hackers for some years. The trouble is that if you want to do something with the data, you need to unscramble it and that leaves it sitting in memory where it’s prey to anyone who can sneak through any garden-variety hole.

The idea with homomorphic encryption is to redesign the computational algorithms so they work with encrypted values. If the data isn’t unscrambled, it can’t leak out. There’s plenty of active research that’s produced algorithms with varying degrees of utility. Some basic algorithms can accomplish simple tasks such as looking up records in a table. More complicated general arithmetic is trickier and the algorithms are so complex they can take years to perform simple addition and subtraction. If your computation is simple, you might find that it’s safer and simpler to work with encrypted data.

IBM, one of the leaders in the field, has been nurturing exploration by offering toolkits for  Linux, iOS and MacOS developers who want to include the functionality in their applications.

Potential for success in five years: Varies. Some basic algorithms are used commonly to shield data. Elaborate computations are still too slow.

Most of the technology in Star Trek remains a distant dream, but we’ve already grown accustomed to putting one of their so-called “communicators” in our pockets. If anything, the current generation of mobile phones is much slicker than the flip phones that Kirk and Spock would use.

The next target for our society may be the tricorder, the box that the medical teams would wave around in Star Trek to diagnose disease and look at our hidden guts. The good news is that the script writers were never specific about what a tricorder does. We know a phaser could kill or be set to stun, but the tricorder was essentially a prop to occupy Dr. McCoy’s hands before he said, “He’s dead, Jim.”

Some researchers are already tossing around the word. One group is working on a “DNA tricorder” that will decode DNA sequences and fit in your pocket. Others have put together a digital stethoscope, EKG sensor, lung sensor, and a blood sampler that pricks your finger. Qualcomm awarded $10 million in prizes and defined a tricorder as a device that could capture five vital signs and diagnose 13 possible conditions.

But we can do more. Right now CT and MRI scanners are large and expensive, requiring elaborate radiation emitters and super-cooled sensors. But point sources of radiation are everywhere in the form of cell phone towers. If a sensor for this radiation could be made with only a fraction of the sensitivity and resolution of the digital cameras tuned to the visible spectrum, well, the computational power of GPUs should start making sense of the insides of our bodies. The signals from nearby cell towers or television stations could act as point sources attenuated by the various bodily tissues.

Potential first adopters: Everyone from doctors in surgery to first-responders at the scene of an accident. Home users with chronic diseases and hypochondriacs will be big fans.

Chance of happening in the next five years: Low. It depends on what you think a tricorder can do. Some basics like measuring blood oxygen are simple and are on the market already. Spotting tumors buried inside your pancreas, though, will take longer.