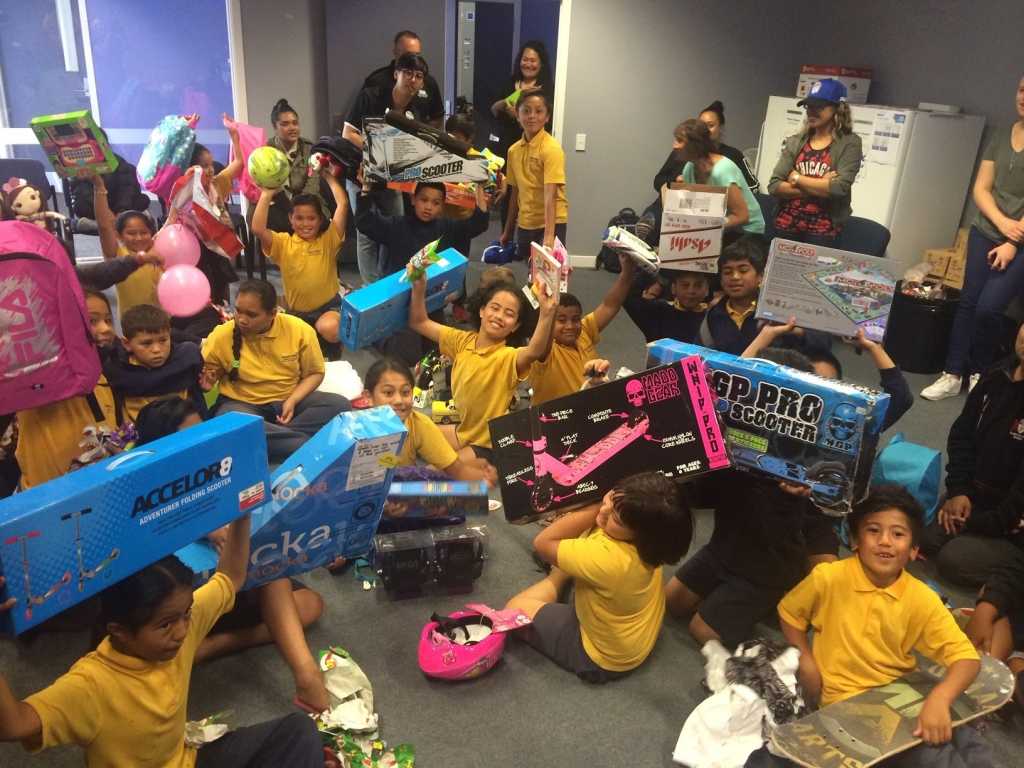 It started with a story from a friend teaching a new entrant class at Tamaki Primary School.

The friend had just moved schools and talked about how a number of her students would come to school with no food and had no breakfast, school bags, or drink bottles.

One summer, the friend recalls, the school had a ‘pop-up’ swimming pool. The kids were sharing swimming togs, often just underwear, with their siblings.

“It was heart-breaking, and to be honest I was totally shocked to hear that kids were going to school like this,” shares Deanne Rawle, who with friend Shannon Beech, started the “Kids Xmas” project.

Kids Xmas has been organising gifts to be given to children in early December, courtesy of ‘Santa sponsors’, to students at the school in Glen Innes.

Rawle and Beech had initially asked the school if they could give kids in their friend’s classroom some presents for Christmas.

“We always wanted to do something more at Christmas, but never really know how or what to do,” explains Rawle. “This was an opportunity to give back.”

The school gave them the go ahead and asked the kids to write Santa a letter with their wants and needs.

Our purpose for Tech for Good is to bring together communities, social causes, and technologists to try and solve real problems

“The kids were asking for pillows, clothes, blankets, shoes, lunchboxes, and everyday items. They, of course, also asked for toys,” says Rawle.

When they received the Santa wish lists, they allocated them to a person who had asked to sponsor a child. The sponsors could then buy the gifts from the child’s wish – like a real life Santa.

“We just started collecting the gifts and from there, it snowballed,” says Beech.

When the presents started arriving at work, people began asking questions and also wanted to give presents.

Rawle says she had to keep asking for more classrooms to give presents to, and soon ended up giving gifts to all the Junior School.

“The gifts took over the boardroom and we started the huge task of trying to match gifts to kids’ letters,” she says.

Beech quickly saw they needed some transportation and had arranged a van to deliver the gifts to the school.

They organised a barbeque for the children and a Santa to hand out presents to every child.

Beech says they want a day for the kids that’s fun. “That’s the ultimate, that is the ending we want – a beautiful experience for Christmas.”

“There were a lot of tears that first Kids Xmas,” discloses Rawle.

The programme, however, was getting so big.

“We couldn’t just keep using spreadsheets and manual ways to match the kids and sponsors anymore. We also were interested in how we could deliver more ‘Xmas magic’ to other kids at other schools in the future.”

In November 2018, they were asked to talk about their project at Tech for Good.

Tech for Good is part of the global NetSquared movement of innovators in more than 70 cities around the world. NetSquared gathers together not-for-profits and activists, tech leaders and funders, and everyone who’s interested in using technology for social change.

Beech says they found themselves talking to a room of people who were interested in using their technology skills to help out.

From the meeting, a core group was formed that met monthly in order to streamline the very manual and laboured processes.

The group raised $5000 through crowdfunding to help fund the build of the system.

Now chief digital and technology officer at Kiwibank, Rumbold says the idea was to use this platform to scale this program to other decile 1 schools in New Zealand and help deliver more ‘Xmas magic’ to underprivileged children.

The new platform was implemented over a week ago during this year’s Kids Xmas Day.

“We sat down and did heavy analysis of the system and the experience of the people involved,” says Mike Hargreaves, CEO of tech firm ALLTeams, and director of Mesh 90.

“We mapped out the new system and addressed the pain points,” he adds. “The idea was to use as much off the shelf, ideally free technology as much as possible and develop the system.”

Thus, the team used Google Apps, primarily Sheets and Drive, as the core of the system and Zapier to connect Google Apps to a range of services.

He explains how it works: They got all the Google sheets of the kids in school and created a QR code for each pupil.

They used Autocrat to populate the Santa Letter template with QR code and the student details. This generated a PDF for each student.

The sponsors sign up and were given personalised slips.

Each kid had a code and when the gifts arrive, Beech automatically scans the presents and matches the QR code of the student on the slip.

They take a photo of the gift that was saved into the drive. The sheet was updated so the team can look back later and see exactly what the picture looked like. This also indicates that the gift has been received.

“We get specific kids and generate a code around those kids, like a student number. We start attaching these numbers to all the different documents related to the gift-giving.”

These include the letter they give the kids to fill out. The school scans the forms, and this information allows the school to generate a personalised letter for the sponsor.

“From my point of view, the realisation that you are doing something manually, if you copy and paste anything, you can automate it. That is kind of the rule of thumb,” says Hargreaves on a lesson learned from the project.

A key lesson for Cristy Spencer, head of marketing at Clearpoint, is the importance of spending a lot of time upfront and mapping out the processes.

She says each of the parties involved joined the workshops around these, and brought something to the discussion.

Rumbold, who is a good friend of the founders, has been giving gifts since the programme started.

“It is very important for me that this carries on.”

Thus, as one of the founding partners of Tech for Good NZ, he invited Rawle and Beech to speak at the group’s meetup in Auckland.

“Our purpose for Tech for Good is to bring together communities, social causes, and technologists to try and solve real problems,” states Rumbold.

“We are not just doing meetups,” he stresses. “We connect, inspire, and enable. Our goal every year is to have two or three ideas that we will get behind every year.”

Kids Xmas was one of the first on the list of such projects.

“We are using platforms to match people who need help, want help, and meet with help.”

“We decided this year to build a platform to prove we can automate everything and to digitise the process for Kids Xmas,” he shares.

“Next year, we can find a sponsor to go to other schools.”

“It isn’t always about coming out with new ideas,” Rumbold explains. “It is about, how do we use technology to scale what is already there and enable them to work together?”

“Without this, Kids Xmas would stay small, and only with one school,” he points out.

He also sees the platform being used for another area, like donating shoes to underprivileged children.

“There are a lot of people in the tech sector that are willing to give the time for the things they believe in and tech people love solving problems. If you bring technology to bear to social problems, that could have a big impact,” he concludes.