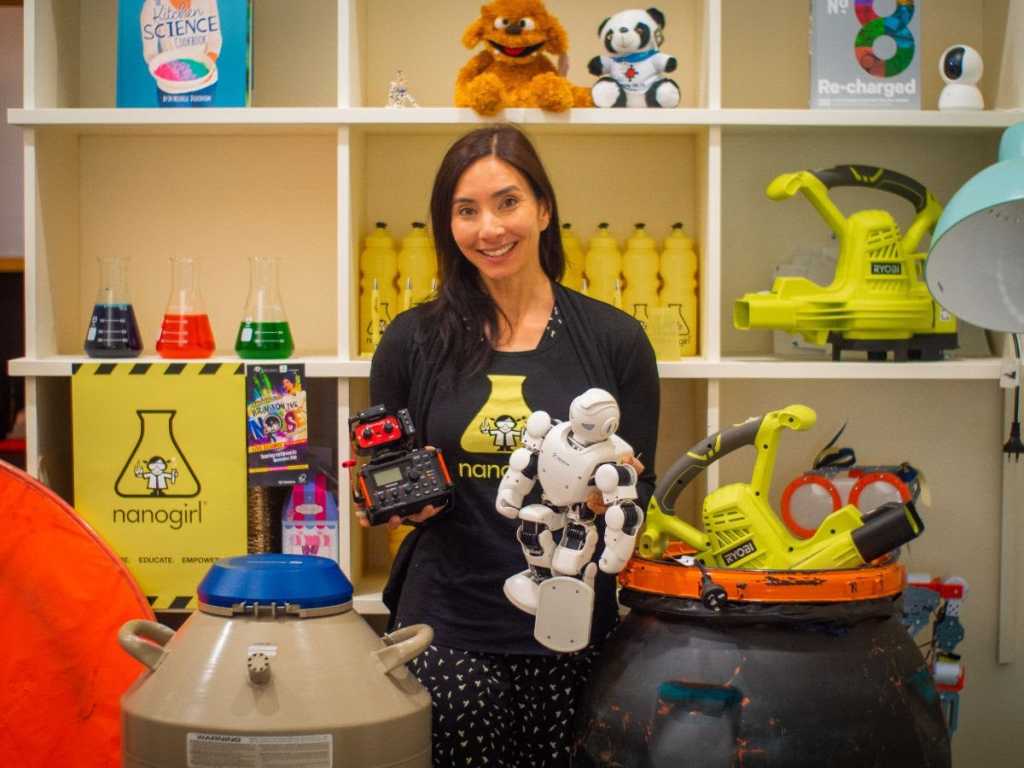 Tech is for everybody, not just for computer nerds

But what brought her to technology is her love for science fiction as a child.

“I was a sci-fi nerd,” says Dickinson, who recalls watching Captain Kirk on Star Trek using a “flip phone thing”.

“I thought, imagine if you can talk to people on these little things, and then it became a reality,” says Dickinson. “I think my love for science fiction is why I love technology.”

“I loved tech way before it was cool,” she says.

She learned to code when she was 10, and mainly through self-learning at home.

Dickinson studied engineering, and eventually became a senior lecturer in materials engineering at the University of Auckland.

“I specialised in nanotechnology and just became a nanotech nerd,” says Dickinson.

She talks about how her experiences have shaped her continuing focus on bringing science, technology, engineering and maths to various communities, especially children.

“Diversity is really important, and that is diversity of thought, through gender, through ethnicity.”

“So I work with a range of kids to try to build that diversity pipeline in technology.”

“I think we are going to have automation of robotic systems for example for a lot of different jobs that includes law, medicine as well as some manual labour jobs.”

“Tech is for everybody, not just for computer nerds,” she stresses.

“Embrace it, live it,” she states. “I want people to be creative with tech, not just consumers of technology.”

Dickinson is one of Kiwi technology leaders who talk about their career experiences in The TechWomen Series produced by Tech Women NZ.

“There is a saying, ‘You can’t be what you can’t see,” says Kate Kolich of NZTech Women, who interviewed ICT women leaders across New Zealand for the series.

There different roles and winding career pathways in tech that can lead to outstanding opportunities Kate Kolich, NZTech Women

“We would like to share these inspiring stories with anyone considering a technology career,” says Kolich, who is also director data systems and analytics at Social Investment Agency.

“The series highlights that there are many different ways to work in tech with different roles and winding career pathways that can lead to outstanding opportunities,” she adds.

Kolich highlights the advocacy of NZTech Women, as part of the group’s celebration of Ada Lovelace Day.

A blue plaque marking the location where Ada Countess of lovelace lived in St. James Square in London, UK

Ada Lovelace Day (ALD), held on the second Tuesday of every October, is an international celebration of the achievements of women in science, technology, engineering and maths (STEM).

‘We get to impact the world’

Dr Elinor Swery is product manager at Nexar, and was chosen as one of the 30 Forbes Under 30 list this year. Prior to moving to the Israeil tech firm, she was a senior solutions architect at Soul Machines, which creates ‘digital humans’.

At the TechWomen series, Swery reveals her first real exposure in technology was when she studied mechanical engineering, and had to do a course in software in the first year.

She watched as her peers “coasted through” the course. “I found it really hard because I wasn’t exposed to it as a child.”

Her experience, she says, would have put off someone from pursuing a technology career further.

Which is why she stresses that strong role models is crucial in order to build a more diverse ICT workforce.

Her message for female students is to “get into technology because it is such a rewarding career.”

“We get to impact the world,” she adds. “I see some of the stuff I have been involved with, it is from solving medical problems to really improving people’s life and there is nothing better than to be part of that.”

Today, she is a software developer at Flux Federation.

She relates how her experience as a teacher is helping her in her current role.

She says what technology calls “soft skills” such as communicating and interacting with other people, are actually “more difficult”.

People skills, the ones I developed through my teaching career, have been useful for me in my career as a software developer

“People skills, the ones I developed through my teaching career, have been useful for me in my career as a software developer.”

Her experience shows there are so many ways to get into technology “where you don’t have to do computer science degrees”.

“Tech is not just sitting in front of the computer, typing on your keyboard,” she states.

Would you like to share how you and your team celebrate Ada Lovelace Day, and honour the achievements of women in science, technology, engineering and maths (STEM)?