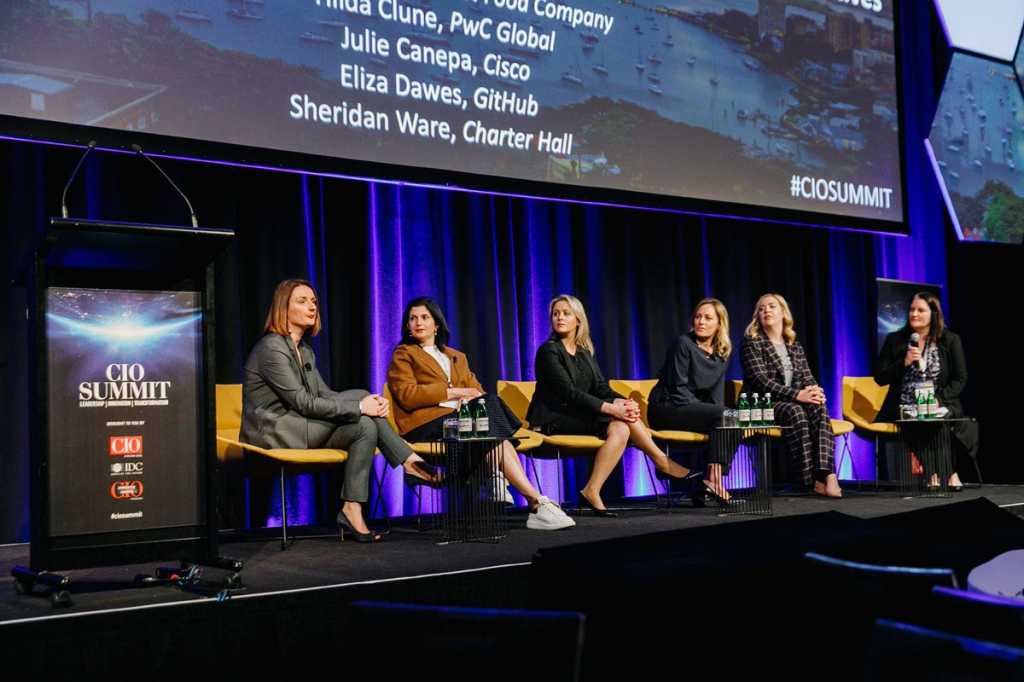 The ‘imposter syndrome’ continues to linger in the minds of successful female IT leaders and has plagued them at some point during their careers, a packed panel of five female leaders told the CIO Summit crowd in Sydney.

“Very early on in my career the imposter syndrome for me was a worry that ‘I’m not technical. I used to think, ‘I wonder if they’ll figure me out. I’ve never written code.’ I couldn’t do any of the things I was asking of my team,” Ursula Phillips, group CIO of Real Pet Food Company and former CIO of PepsiCo, told the crowd.

Indeed, that’s one thread of discussion revealed at the recent CIO Summit in Sydney during the candid and interactive ‘Women in IT’ panel.

The group of five eloquently revealed insights and personal stories of challenges and triumphs in climbing the corporate IT ladder.

Phillips, who originally did a politics degree and came up through project administration and project coordination to be a project manager to become a CIO, explained further how early in the game she suffered greatly from imposter syndrome.

“What I took out of that was understanding that there’s this bias towards the negative and that’s probably seen as a female trait. The thinking is that you have to have 100 per cent of the skills that go into a job, which is not necessarily true. For me, I needed to come back to why you’ve actually been hired, which is around project management, your soft skills, your communication, and your scheduling.”

Phillips said it’s also important that businesses today have proper representation. “Do we see people that look like us around the table,” she said, explaining there were many women at the executive table at PepsiCo. But when she stepped out of the PepsiCo bubble, and into the wider CIO community, she’s often the only female executive in the room.

Charter Hall’s Ware, meanwhile, has an interesting take on the term ‘imposter syndrome,’ instead calling it the ‘pioneer syndrome.’

“I feel like an imposter most days. I’m a technology leader that happens to work in the real estate field, which is a double whammy. I decided the one thing I could control was the conversation I had with myself. So I am an imposter, many times I’m the only woman in the room, but someone didn’t just throw me in there for the sake of it, they trusted me to go in there and be diverse.

“So I call it pioneer syndrome and I’ve changed that conversation and I’m not going to waste it, the idea that someone put me in that room. I’m going to go in and waste it by being self-conscious. I’m actually going to be a pioneer and act and behave in accordance with my values and my knowledge of what I bring to the table.”

“Being brave is beneficial to my company – and that’s why they put me there.”

Cisco’s Canepa said the ‘imposter syndrome’ discussion also resonates with her, but not so much in the early part of her career.

“In the early part of my career, not so much. I felt like I was just going for it and everything was great. I was loving technology and loving what I was doing. It wasn’t until the middle of my career when I had life changes – motherhood, for example. I did lose confidence during that time. That reentry into work, and then leaving, was hard. Women need support around that time of their lives, and men too.

“As I moved into more senior leadership roles, I felt that creeping up again. You’re looking around the room, there’s not a lot of people like you. I didn’t even have the words for it – imposter syndrome. And even though it was coined in the late 70s, it’s still pretty absent in our vernacular today. I’m glad we’re talking about it. Experts say that 65 per cent of women experience this at some point in their career – and men experience it too.”

PwC’s Clune, meanwhile, who will admit she gets tired of talking about the subject of ‘Women in IT, is passionate about helping to solve the problem of a lack of women in the field (particularly at the senior level) – but she thinks it shouldn’t rest on the shoulders of women alone to solve.

“I think the issue of women in IT – or women broadly – is really well known. It’s an issue that there’s great awareness of. It’s part of a bigger diversity issue that we have. The irony is there are five women up here talking about it. I would ask you, what other diversity challenge is left to women to solve.

Instead, she said the industry needs champions of change, who are in a position to make leadership decisions and address diversity.

“This is not a problem that we need to solve. This is a problem that’s a collective leadership problem, where we need champions of change – regardless of gender. We need champions of change. This is about creating environments for women to be able to succeed in the workplace, not just at entry levels, but at senior levels. That’s the big issue for us right now. Women are opting for roles that give them the flexibility. Boards are snapping up senior women right now like you wouldn’t believe.

“We have an issue across the entire lifecycle of women in IT, women in all aspects of roles. I don’t think it’s one particular point or one particular issue that we need to solve.”

Additionally, she said women have a choice and need to have the courage to opt into more senior roles.

“People have choices. Women have choices and we need more women to opt into senior executive roles in organisations to provide that balance and diversity, and to bring to the table something different. We’ve moved away from the like-minds approach to diversity brings a much higher value conversation at a leadership level. But it’s a whole ecosystem that needs to be looked at to say, ‘How do we do that effectively?’”

The power of inclusion

Creating the right environment of inclusivity is also key. For GitHub’s Dawes, who’s a female leader in martech (an area where there’s typically more women than in IT), she said it’s so important to create ‘inclusive’ environments.

“Being a women in tech, particularly in marketing, I find it’s my responsibility to make sure we’re creating inclusive experiences, even though I know there’s going to be 9.5 white men in the room.”

While it’s tempting to do a pizza night or a whiskey tasting session, she said she recognises the need to cater to both men and women and to provide experiences that’s relatable to both groups.

In addition to being “inclusive,” enabling and empowering “diversity of thought” is equally as important to businesses today, and a real competitive advantage, she added.

Equally important is the power of connections and networking. Canepa said she survived her tough times – and dips in confidence – through mentorship and sponsorship.

“Sponsorship was really important. The mentorship from senior women who’d been in that place where I’d been, helped me tremendously. The sponsorship from senior males that I worked with, that had networks, that knew how it worked, that encouraged me to lean in and go for those jobs. And I found that’s a really important role that men can take with women in their workplaces.”

In terms of finding the right people, and giving women a chance, Charter Hall’s Ware said many women sit on executive committees and should encourage a system of checks and balances.

“Actually ask the question, was there not somebody that was competent that was female or from a different ethnic background? Or whatever that inclusion looks like and if not, why not and what are we doing about it?”

Clune said she’d like to get to a place where having a 50/50 male and female board or executive team is not an achievement, “it just is” and apart of business.

She also said the industry hasn’t done a good job of being able to crystallise what a future in tech might look like for our emerging talent.

“I think we have a lot of work to do, starting at high school. We know there’s an issue around school and skills and coming out of university.

“I spent some time with Year 8s. Half a day, talking to them about what a career in technology might look like. And they could not connect what they were doing at school to anything that might possibly look like a career in technology in five to six years time. All they cared about was maths was damn hard and a subject at school they never want to look at again once they’re done, so I think we have a lot of work to do in those early stages across the board.”

Dawes agreed, saying eight to 12-year-olds are at a really impressionable time and it’s so important to inspire and capture the imagination – and educate about the countless possibilities associated with technology – at that age.

“If you get kids who are already interested in STEM subjects, doing things they enjoy, before they realise they’re the only girl in the room, then they tend to move forward with it,” she said, explaining coding is a great way to introduce kids to technology and to build a connection with the field.

Certainly, telling stories is key, according to Cisco’s Canepa, who said the industry needs to take a “lifecycle approach” to diversity and pump up the dialogue and storytelling.

“With the program, Women Rock IT, for example, we try to storytell and showcase women out there in the technology field. Real women and what are they doing. They’re not just coding and doing robotics, but they’re actually making meaningful changes in their communities and their workplaces, so how do we tell those stories more to younger people.”

Additionally, she said another program at the tertiary level, MentorMe, meanwhile, reaches out to 186 students across Australia, who get access to one-to-one coaching. “In that phase, it’s about how do we keep women in, how do we prevent them from quitting. They’ve started down this path so how do we keep them engaged and show them real opportunities?”

And once the IT industry hires women, businesses (like Cisco) need to continually create an amazing culture for women, she urged, which requires an investment in both resources and time.

“A culture that values them and offers flexible working, that offers learning, training, exposure, and opportunities to keep growing their careers, and then it’s the leadership piece. How do we focus on finding and developing leaders and helping women get into those leadership roles? We have to measure all of that, see how we’re doing, and then adapt our strategy so it’s pretty agile in how we approach it.”