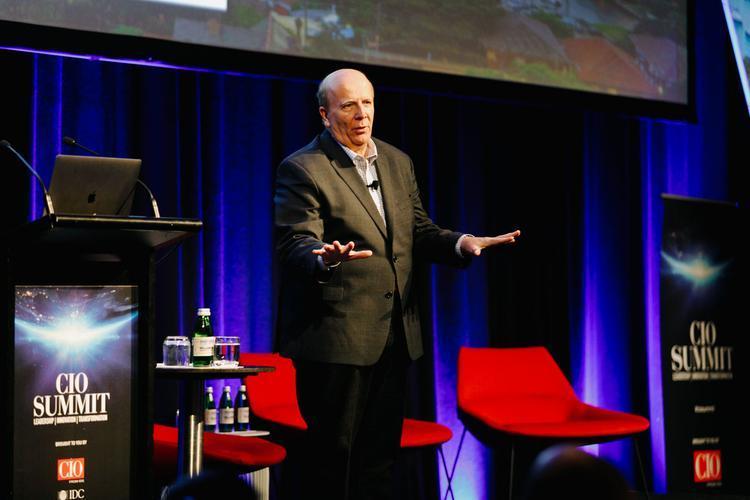 IDC’s global vice-president and IT executive advisor, Joseph Pucciarelli is a plane crash survivor – a fact not many people know – and a story he references to inspire today’s tech leaders about the need to take risks and the importance of ‘working the problem.’

“I was in Canada. The plane was low on fuel. A blizzard had changed course and we needed to land at Halifax, Nova Scotia in a blizzard on an uncleared roadway.

“Not a great day. The plane lands and we couldn’t stop. It ran all the way down the runway…without realising it, I started working the problem. I began thinking about what do I know about plane crashes – and there’s only two things.

“First, in a low speed crash like a landing, the odds are there’s going to be a lot of survivors on the impact. The problem is you have a 75 per cent probability of dying in a subsequent fire. The other number you need to know is you’ve got about two minutes to get out of the plane if there’s a problem in a crash.”

The plane bumped along the runway and Pucciarelli knew he had to get off the aircraft.

“I popped the hatch and down I went, into a blizzard, where I dropped into waist deep snow. I grabbed the end of the inflatable ramp and I held on.”

Pucciarelli told his story of ingenuity and survival during his talk, ‘A CIO’s transformation playbook – opportunities, best practices and tactics’ at the recent CIO Summit in Sydney.

“The point is when confronted with challenges, we have to act,” he told the summit crowd.

“When we look at the challenges before us as IT leaders and CIOs, it’s a question of how we’re going to evolve the IT organisation to be an ally, an enabler and an organisation that supports the business.

“Part of that is we have things to do, we have responsibilities,” he said, citing his favourite movie, The Martian, where Matt Damon’s character is faced with astronomically difficult situations.

Damon plays an astronaut who becomes stranded on Mars after his team assume him dead, and he must rely on his ingenuity to find a way to signal to Earth that he is alive.

“And he keeps, ‘working the problem.’ That’s what we do as IT and business leaders. We work the problem.”

Recognising that each IT leader’s transformation journey is unique, he encouraged tech leaders to keep pushing through and cited some positive examples of digital transformation.

According to recent IDC Asia Pacific numbers, he said 50 per cent of companies in the A/NZ region will be successful with their digital strategies by 2020.

As an example, he cites some recent tech initiatives underway at Air New Zealand which is considered game changing.

“They have built a technology network, together with Microsoft, using blockchain in order to enable them to 3D print replacement parts for their fleet. As the CTO of Air New Zealand said, ‘We are at the end of an 11,000 kilometre supply chain, and every time we need a part, being able to print it locally, enables us to take cost out and keep the utilisation of our equipment higher.’”

Across the globe at Walmart stores in the US, he said two years ago the retail giant announced an initiative to bring 50 robots into their stores on a pilot basis to do inventory. The robots do an inventory of the stores every two nights.

“The rule of thumb is you do a retail inventory once a year. Being able to do an inventory – even once a week – changes the whole management model for a retail organisation.”

More recently, in April Walmart announced they placed an order for a vast amount of robots – 1,500 new autonomic floor sweepers, 300 additional store scanners, and 900 new automated pick up and cleanup robots in stores.

“If you’d asked me two years ago if we’d see that kind of change in such a short cycle of time, I certainly wouldn’t have guessed it.”

In saying that, he said disruption is coming faster and businesses are moving at an accelerated rate.

“There’s a fundamental change in business models. The business model that used to win was a fortress business model – scale, protect, defend. And what you’re seeing now is that the winners characterise agility and speed and flexibility.”

In Australia, he said 70 plus of the entire economy is services now, which is consistent with what’s going on in the rest of the world. And the services industry – like all other industries – is seeing massive digital disruption.

“When you’re having a conversation in your organisation and saying, ‘Are we seeing disruption?’We would say that most industries are being disrupted. It’s coming.”

He said the next evolution of technology is going to be quite different by industry. The banking sector, for example, will focus on cyber threat detection and prevention; remote health monitoring will be a big focus in healthcare; while autonomic operations (the use of robots) in discrete manufacturing will be big.

He said there’s ongoing misconception about the new and emerging digital technologies and strategic play – for starters that it’s only open to the top end of town.

“When we talk about these new digital strategies, it’s fun to talk about the intergalactic stuff – the Boeings and major change companies – but the opportunities are legion. They are available to companies with the ingenuity and perseverance to attack them.”

Talking numbers, he said in 2019, 40 to 50 per cent of CIOs have initiated their IT transformation strategy or are planning to within the next 12 months.

“The kind of initiatives that we see organisations pursuing are governance; IT ops; autonomic use cases; and self-service portals.”

He said some of the planned technology investments in Australia include cloud apps, big data, data lakes, digital marketing, and always-connected devices.

In saying that, he said the world we’re going to be operating in as CIOs will be characterised by some key differences in the future as it relates to leadership styles.

To capture this idea, he shared some leadership advice from Elon Musk.

“Elon Musk has three rules for successful leaders: communication and speed are everything; the contextualisation of that communication is what differentiates the good leaders; and the final thing is he challenges all employees to challenge the rules.