The data.gov.au website has shared its metadata with data.sa.gov.au, allowing users to search datasets from both sites using a shared search repository.

The data.gov.au team has created CKAN extension to the website, which will allow users to click on a ‘Results from other Australian Data Portals’ at the end of their search results. CKAN is an open source data management platform, which data.gov.au moved to in mid-2013.

The South Australian open government data website is the first to share metadata with data.gov.au, with more data portals to come on board in future.

Below is an example of some search results from the data.sa website when searching data on Australian parks and reserves. 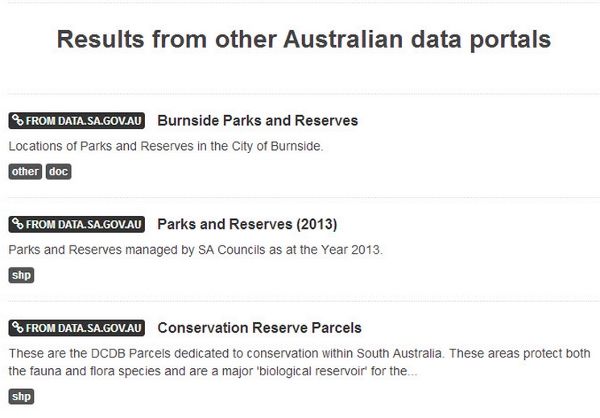 Last year, data.gov.au added 2, 503 datasets from Geoscience Australia, the largest amount of data the site had received at the time. The data was used by Department of Communications and NICTA to create a National Map to visualise terrain, infrastructure, water, vegetation, habitation, etc. It was featured in last year’s GovHack event.