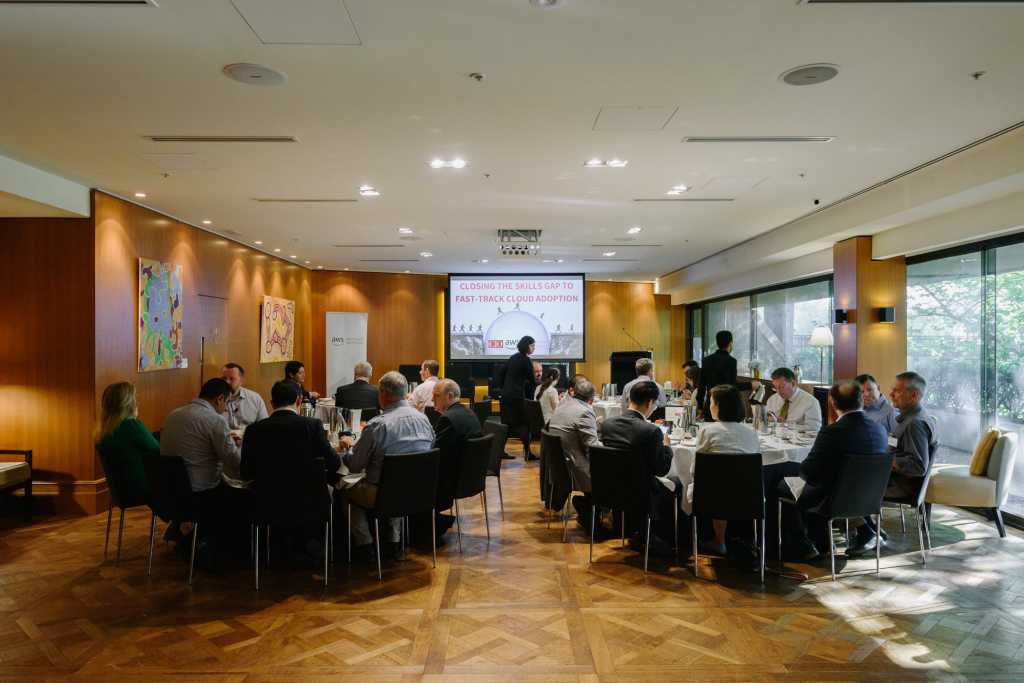 In fact, 58 per cent of Australian organisations responding to a study conducted by IDG Research and Amazon Web Services (AWS), agreed IT skills gaps are slowing the progress of vital cloud deployments for digitisation programs.

Further, only 15 per cent of these organisations consider their IT employees to be completely prepared for cloud adoption from a skills standpoint.

Tech execs gathered in Sydney recently to hear from industry leaders about the best ways to deal with the skills shortage, particularly in the area of cloud computing infrastructure. The breakfast event was sponsored by Amazon Web Services.

Sam Higgins, a veteran tech sector analyst at IBRS and keynote speaker at the breakfast, said the research indicated the promises of cloud adoption in Australia have not been realised.

“Part of this is we don’t have the adequate skills – we are not communicating to executives, to our stakeholders and others exactly what the cloud is in some circumstances, or why we need cloud engineering. If we don’t have the skills to do this ourselves, it becomes very difficult to communicate it clearly and what happens is we continue to propagate believing cloud myths,” Higgins says.

After a decade of cloud adoption and the advent of a “serious public cloud”, Australian firms are very much cloud-first and cloud native.

The research also found speed, cost and security are key drivers for organisations moving to the cloud.

“We are keen and can understand that we get these benefits from the cloud [but] something has gone wrong. Just 17 per cent of the organisations surveyed for the IDG research agreed that were successful at leveraging cloud technology for these business advantages,” he says.

“That’s not a great result after 10 years of chewing away at the problem, with less than one in five people saying, ‘you know what, we delivered on the promise we made to the business when we went down this cloud path.’”

Higgins says this is despite 74 per cent of research respondents agreeing with the statement that certifications and training in cloud technology was needed to maximise benefits.

“So we know what the benefits are, and we are pretty sure we are not going to get them, but it seems to be we are doing exactly what it is to solve the problem. So we are in a situation where organisations are probably not heeding their own advice.”

The ‘myths and legends’ of cloud’s past

Higgins says some organisations still believe in the ‘ghosts, fairies and yowies’ of cloud computing’s past – the myths and legends of cloud that fall into three categories: security, cost and usage, and integration.

“We still hear people espousing the security myth that the cloud is not as secure as what they can offer internally. Yes there are options, but what AWS has done in the cloud security space is invested a significant amount of its budget in its ‘fabric’ but also provided options in its solutions to allow a security posture to reflect the needs of particular use cases,” he says.

The second cost and usage myth, the belief organisations can produce computing power cheaper and faster than AWS, could be a case of misplaced comparisons.

“[Doing this] requires utilising skills from existing engineers who understand your current environment and are trained to understand what the additional services and capabilities are.

For example, what the difference is between the level of patching, management and virus protection that can be done on a virtual machine on-premise, how secure and cost-effective it is and tools required to keep utilisation above, say, 70 per cent,” he says.

This is compared to a cloud service where machine utilisation is completely controlled by the provider.

“It’s about being able to discern…the difference between the service being offered by AWS versus the service you provide.”

The third myth is that cloud integration is messy, Higgins says.

“But when you unpack that discussion, what you find is we’ve thrown out everything we knew about application integration and we’ve just done a bunch of spaghetti stuff. Admittedly, the vendors have some responsibility here as they made it very easy [to connect apps to the cloud] because that’s what we asked them for.

“We asked them to connect Salesforce running on AWS to my privacy tenancy in AWS without having to leave the AWS fabric. The fact is, I might then choose to use the Salesforce integration tools and join 50 of my applications point-to-point to Salesforce.

“We shouldn’t blame [integration issues] on the cloud vendors. That’s a choice we made, it was the tools and powers that were given to us within the organisation. But as the old saying goes, ‘with great power comes great responsibility’, and often when we talk about great power, we are talking about knowledge. And [building] knowledge requires training,” he says.

The bottom line, says Higgins, is cloud success is about skills, and addressing the talent gap should be a concern for all organisations.

Higgins says of the organisations indicating a lack of technology skills is slowing cloud deployments, more than half said they would manage their cloud infrastructure internally.

“So if we are saying we have a skills gap, but we’re still insisting on managing clouds internally, then we need to take some action,” he says.

How cloud training has worked for IAG

Alexander Swift is cloud lead at IAG, working inside the general insurers Customer Labs with a team to create technology innovations enabled by cloud infrastructure.

In November last year, the organisation created the IAG Cloud Academy, an initiative that has trained around 800 employees in cloud technologies across various departments, including IT, risk, audit, finance, as well as product owners.

“IAG has aspirations to accelerate the use of the public cloud to more fully access its benefits. This allows more rapid, efficient and flexible customer decisions. To achieve this we knew we needed to have more skilled people who understood cloud and what it can mean for us,” says Swift.

“We acknowledged there was an opportunity to up-skill our people – both in technical and non-technical roles – to address the skills gap in our business so we could work with cloud at speed and provide improved customer experiences.”

“Through IAG Cloud Academy, we have changed the language we use among ourselves so we can be closer to our colleagues across the business.”

“When we talk about training and enabling our customers to make the right decisions. When we work with companies like IAG, we make sure that any training curriculum we are building or any development has to be based on business outcome.

“So what we are trying to achieve is to enable IAG, through our training programs, is to actually ensure teams are self-sufficient to become innovation masters. Organisations like IAG understand what their mission is and they work backwards from that…it’s about making agile and quick decisions that are best for the customers. Cloud is a good way of getting there but it’s about making that quick decision to benefit your customers and using technology as the enabler,” she says.