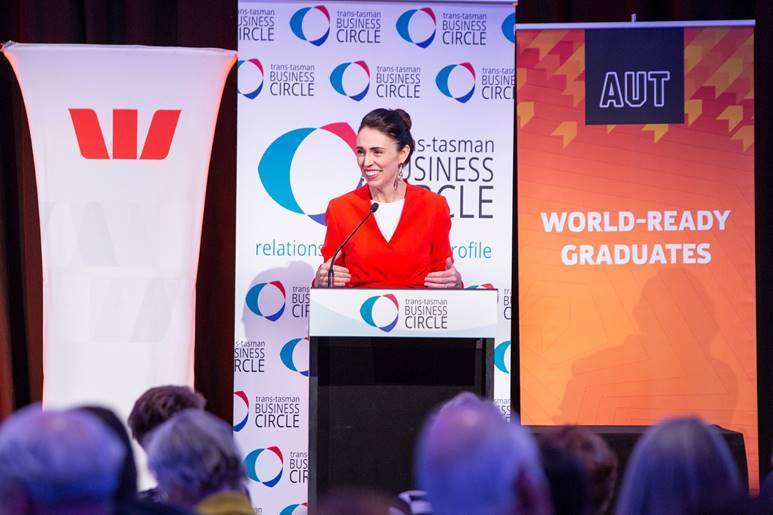 “Countries the world over are currently grappling with digital transformation and transitioning their economies, and New Zealand is no different in that regard,” says Prime Minister Jacinda Ardern.

But, as she notes in her keynote at the Trans-Tasman Business Circle Forum, the New Zealand economy “is in good shape amidst global headwinds”.

Yet, she says, “certainty” or “uncertainty” are words she often hears in discussions on the economy.

This, she says, was highlighted early this week when one of her staff members asked an economist to sum up the New Zealand economy in one sentence. “It’s ready for lift off,” was the response.

The next question that follows is, “So what is it waiting for?” The response: “Certainty.”

Ardern says she has a simple response to this: “There’s a difference between uncertainty and change. We cannot ignore the challenges we face – the skills gap, the need for a transition to a low emissions economy, our desire to build inclusive economy where businesses compete on great products and services rather than undercutting wages and conditions.

“Yes, this means there will be change. But the alternative is the status quo and that, too, would have an unacceptable impact on our economy and our people.”

“We must not talk ourselves into a funk,” she points out.

“We need to move away from the notion of uncertainty to the notion of collectively embracing change… We have big aspirations we can achieve if we continue to work together.”

She says the trade environment may be challenging, but there are some positive developments.

“We outperform those we traditionally compare ourselves to,” she says, like Canada and the OECD average.

New Zealand also has a record low unemployment and annual wage growth is at its highest level since the 2008 financial crisis. The average wages have increased by 4.2 per cent in the last year alone.

New Zealand continues to be a good place to do business, and tops the World Bank’s 2019 Ease of Doing Business index.

“Our globally competitive economy is underpinned with stable political and regulatory systems, an innovative, well-educated population and our proximity to 60 per cent of the world’s population,” Ardern says. “We are a stable place to invest.”

On the future of work, she says the government aims to shift the status and profile of trades training.

The Ministry of Business Innovation and Employment forecasts demand for skilled workers, including plumbers, electricians and tilers, to increase by an average 5,000 per year over the next three years, she says.

To make sure there are enough skilled workers to fill those roles, the government has made the single largest increase in Trades Academy places in recent years and committed to a new centre of excellence for vocational education for the construction sector to drive innovation.

Ardern also cites the creation of the $2000 Prime Minister’s Vocational Excellence Awards for the top vocational student in every secondary school in the country to lift the profile and status of trades.

She says next week, the Future of Work forum will announce priorities that include Industry Transformation Plans for the food and beverage, digital technology, forestry and wood processing, and construction and agritech sectors.

Another is support for displaced workers. “The future of work will mean a likely increase in numbers of workers who find that their jobs or skill sets are no longer required,” the prime minister says. “We want to ensure that we make their transition between work as smooth as possible, and minimise any negative effects, such as wage scarring through a loss in earnings when they return to work.”

Another priority is protection for “non-standard workers,” referring to contractors or those in the gig economy, she states.

“We need to make sure that the increase in non-standard work does not mean a decrease in the protections for workers.”

“The government has a plan to transition New Zealand through these uncertain times, to more productive, sustainable and inclusive growth that improves the wellbeing of all New Zealanders,” she concludes. “Shifting the dial on these long-term economic challenges requires us to work together.”

Derek McCormack, vice chancellor at AUT, spoke about the challenge facing the education sector – how to prepare students for the changing, developing and unpredictable future that we all face.

“We do need education to instil students with the skills to navigate the shifting currents of the future,” he says.

McCormack says a view he shares with many employers is the need to support students with whatever they are learning to acquire what he calls the “C-skills”.

These are critical thinking, creativity, curiosity, dealing with complexity, collaboration and cooperation skills, cultural intelligence, and caring and empathy.

These attributes are transferable to any work or business situation.

These are habits of the mind that can see and solve problems, identify new opportunities and spot a wrongful claim in order to ignore or correct it, he states.

“These are skills that have got intellectual aspects. They also include social skills to create team players, leaders and partnership-makers. They don’t just contribute to human capital; they also contribute to social capital.”

“They are useful competencies for a globalised, technological, but still very much human world.”