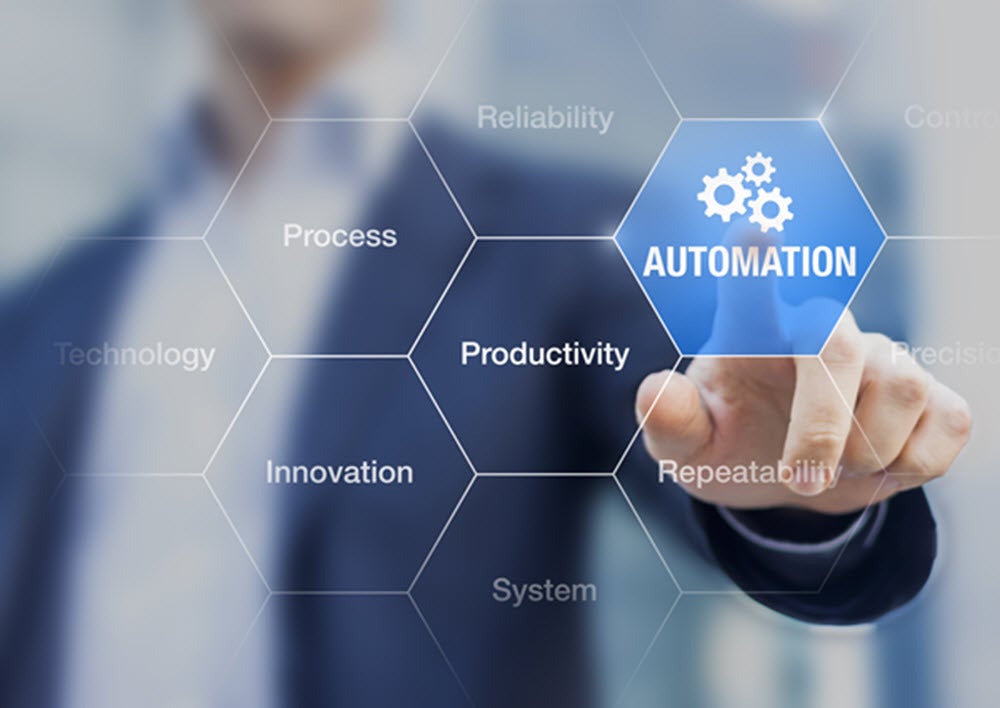 To take advantage of innovations like artificial intelligence you must first move away from manual processes. For that reason alone, automation should be a key short-term priority for most CIOs.

[
Learn from your peers: Check out our State of the CIO report on the challenges and concerns of CIOs today. | Find out the 7 skills of successful digital leaders and the secrets of highly innovative CIOs.
]
[ Learn the 10 old-school IT principles that still rule and the 12 ‘best practices’ IT should avoid at all costs. | Find out what your peers are up to with our report: State of the CIO: IT-business alignment (finally) gets real. | Get the latest insights by signing up for our CIO daily newsletter. ]

Automation also forces you to address hidden problems in your processes that are normally handled by staff working around the process. That kind of routine exception handling greatly reduces employee productivity. Automated systems are also self-service systems; automating the most common tasks in a process will free up time for staff to spend on more nuanced problems that require judgment.

Automation often starts tactically, with individuals and teams automating services and processes they use and control. By making automation a strategic priority, you can deliver automated services that individuals and teams use but don’t control, thereby spreading the benefits beyond a single department. Automated, self-service systems, such as password resets and expense submissions, can be used broadly throughout the company to great benefit.

Dion Hinchcliffe, vice president of Constellation Research, is urging CIOs to get to 90 percent automation by 2025 in areas where it’s a natural fit: help desk, service inquiries, training, hiring, onboarding, operations, IT procurement, cybersecurity, project administration and reporting. CIOs should also be tackling automation of vendor management, governance, enterprise architecture, stakeholder engagement, communications and evangelism. “These areas are more resistant to automation but should still be automated as much as possible,” Hinchcliffe says.

J.P. Gownder, vice president and principal analyst at Forrester, warns against “moonshot” projects that often underperform, such as Amazon’s AI recruitment system or M. D. Anderson Cancer Center’s Watson project. “Instead, companies should take a step-by-step approach that attacks focused problems one by one — and then daisy-chain them together.” He suggests looking for quick wins in narrow, focused problems, automating specific tasks and processes rather than an entire value chain like customer service, and using automation alongside employee tasks rather than as a replacement.

“There are both low-hanging fruits and common areas,” says Gownder. “Shared services has a lot of rote, repetitive tasks (think of IT service desk password changes, or financial reconciliation in the finance department, to name just two) that can be automated.”

Automation should be a collaboration between business and IT functions, Gownder believes, with CIOs educating business leaders on what’s possible and how these technologies will fit into existing infrastructure and feedback from business teams. “It’s important to have a business analyst who can watch early pilots, take learnings, and identify new workflows to address. It starts with coherent pilots, data gathering, and then determining other similar functions that can be automated.”

Here is a look at seven areas ripe for automation and how to go about strategically automating processes within each domain.

Improving customer experience is the top priority for many CIOs, with 62 percent of UK CIOs reported it as their most important goal in a recent Harvey Nash/KPMG CIO Survey.

Moreover, 80 percent of customer service teams in a recent survey run by DigitalGenius said 20 percent of their tickets were highly repetitive and easy to resolve. Tasks such as those are prime for automation, which can improve customer satisfaction and reduce the high turnover in customer support roles.

Chatbots and virtual agents are ideal for easy, repetitive requests and for customers who want self-service. Microsoft has been using its AI Solution for Customer Service for enterprise support in call centers; over a six-month period with more than 100,000 virtual agent sessions a day, the number of customers who were able to solve their own problem doubled. HP is using the same system to handle 70 percent of its support cases.

If you don’t deal directly with customers, consider applying the same techniques internally to HR service desks, like benefits administration.

Adding AI to conversations can help automate more complex tasks such as risk assessment. Micro-lenders Grameen Foundation worked with Accenture Labs to create an emotional analytics app to help its advisors detect when a woman applying for a loan is being pressured by someone else, making the loan a burden rather than a help.

Over half of the organizations Montage recently surveyed are already using automation for applicant interview scheduling, which helps HR handle high application volumes by pre-qualifying candidates. “By automating, organizations enable their recruiters to become more strategic and focus on meeting the modern candidate’s needs and expectations [and] build meaningful relationships with those candidates to eventually secure top talent,” Heikkinen says.

The next step is using AI tools to help assess candidates, which creates more consistency in the recruiting process; nearly half of the organizations Montage spoke to are also doing that.

Repetitive, low-value HR tasks can also be automated, like calculating leave benefits or working out the value of accrued vacation time when employees leave. By integrating various systems, automation can have a greater impact. For example, matching employee badge swipes and computer usage can help track whether vacation records are accurate. Use the HR time freed up by this for questions that require greater consideration, like parental leave, Gownder suggests.

Inefficient travel and expense systems waste a lot of employee time. Cloud storage platforms such as Box and OneDrive have added OCR and image recognition to scrape information from receipts. Services like MileIQ can track mileage for travel claims, and the team behind MileIQ has created a new app called Spend that can connect to bank and credit card accounts to automatically categorize expenses. SAP Concur has a similar expense app that collects transactions from hotel and car rental bookings; it can even handle exchange rates for overseas travel and make automatic payments to employee bank accounts or credit card companies.

There’s also increasing interest in areas such as accounts payable automation. McKinsey estimates that 27 percent of finance activities could be automated, around a third of which could be done with robotic process automation (RPA).

To compete with cloud services and shadow IT, IT teams need to be as responsive. Here, automation is key.

A recent Vanson Bourne survey of IT decision makers across Europe found that IT teams spend more than half their time on operations, maintenance and fixing problems and only 11 percent say their infrastructure is highly automated, meaning that maintenance and administration takes longer.

“IT professionals themselves believe that almost a fifth of their current daily tasks could be automated by intelligent automation and AI,” says James Dening, vice president for Europe of robotic process automation platform Automation Anywhere. “This could include software or hardware installations, file and folder management, server monitoring, Active Directory management, user on and offboarding, or batch processing.”

The same McKinsey study mentioned above suggests that 40 to 80 percent of those service desk tickets could be automated with RPA, especially password resets which remain a high percentage of all support requests.

Connecting on premises infrastructure to cloud services with tools like System Center and Intune allows IT to automate extremely hands-on processes for device deployment and configuration. Using the Windows 10 feature Autopilot, for example, automates device setup and management through Azure Active Directory as soon as users turn on a new PC for the first time. (Jamf Pro offers similar provisioning options for Mac.)

“With Windows Autopilot you’re able to use the cloud to roll out numbers of capabilities and take a device from the ‘out of the box’ state into a fully managed device with a corporate image,” Bernado Caldas, general manager of the Windows Commercial team at Microsoft, tells CIO.com. “That’s a process that’s very manual today; you have to create images, manage images and deploy them. With Autopilot, you’re able to do that in place with cloud services and that simplifies the life of the IT team quite a bit.”

A new Desktop Analytics service that will be available in preview soon extends automation to app compatibility testing, which currently takes significant resources and slows down upgrading to new versions of Windows. “We use machine learning and the cloud information we have around applications that are running already in Windows and Office to infer compatibility and give customers insights into what apps they have in their estate and how compatible they are with new versions of Windows and Office, reducing the time it takes to consume them,” Caldas says.

That same combination of on-premises and cloud management can also improve security and compliance using automatic monitoring of suspicious behaviour linked to conditional access policies for devices. Setting up such a system can lock devices that show unusual behaviour out of key enterprise systems on the network, blocking attackers while you tackle the infected machines.

“Conditional access automation allows CIOs to determine when devices should be able to access resources inside the company based on a number of different criteria; the risk profiles on their devices, their identities and the data they’re trying to access,” says Caldas.

Building on the automation of device provisioning and management like this extends the benefits of automation across organizational boundaries — a sign of strategic automation. “Security and compliance is often managed by a completely different department in IT,” he notes.

Automation is a key part of devops, especially in creating builds for continuous deployment. “One reason is that it’s just faster,” says Lubos Parobek, vice president of product at Sauce Labs. “Removing as much human touch as possible results in a faster process and lets you accelerate app development. It’s also much more repeatable; you don’t have to reinvent the wheel when you have automation. And you remove a source of error; people are fallible, they make mistakes — automation doesn’t.”

Test automation starts with automating the creation of test environments, Parobek tells CIO.com. “With containerization you’re creating disposable environments that are super easy to stand up and very isolated, that really facilitate development and testing at higher velocities.”

Automating the testing process itself is harder, but also critical for increasing development speed and reliability. The biggest problem is not the technology but the cultural change involved, he warns. Doing so, however, can reduce weeks or months of testing time to a few minutes. Parobek suggests starting with new development where you can create a testable app from the beginning, and working on mobile apps because they’re smaller. “With an app that’s been around forever there’s often heavy lifting to do to make the basic app changes so it’s testable.”

If you’re adding test automation to a large existing app, concentrate on the “make or break” critical flows that have to work to satisfy customers and generate value. “Externally facing apps have the biggest impact on revenues,” he notes.

More on RPA and AI: