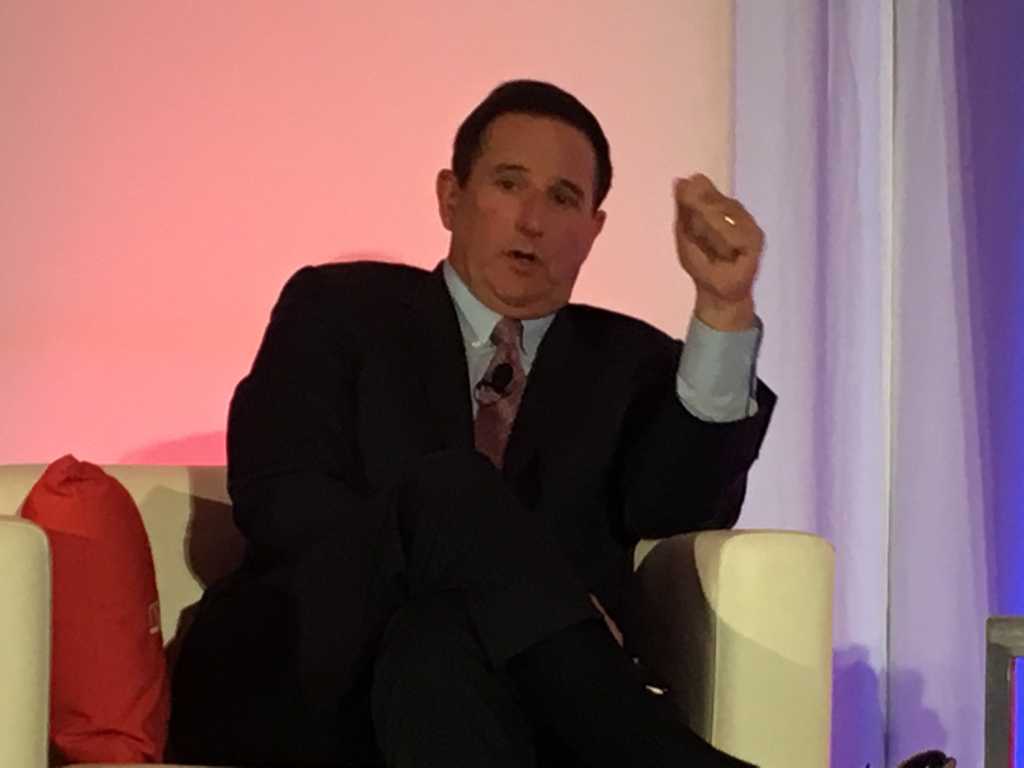 As enterprises transition from on-premises IT, Oracle is positioning itself as the premier, one-stop-shop provider for cloud computing. You may think this is a stretch, considering that, for example, Oracle has been lumped in with “Others” in Gartner’s ranking of top public infrastructure as a service (IaaS) providers, far below leaders like Amazon, Microsoft and Google.

Oracle, however, has over the past few years steadily revamped its vast software portfolio to the point where all of its ERP applications are available, with their full feature sets, on the public cloud or in its Cloud at Customer offering, which lets users put all of their Oracle cloud apps behind the corporate firewall. It’s imbued its PaaS (platform as a service) offerings with blockchain and machine-learning services and last fall released its Generation 2 Cloud, which it bills as as the perfect IaaS platform for its autonomous Oracle Database 18c.

While the company may remain far behind the public cloud infrastructure leaders, it has seen users respond to its efforts to beef up its cloud offerings, particularly for ERP. The company said its cloud ERP businesses, Fusion ERP and NetSuite ERP, delivered a combined revenue growth rate of 32 percent in its second quarter for fiscal 2019  ending Nov. 30. The company now has nearly 6,000 Fusion ERP customers and over 16,000 NetSuite ERP customers, CEO Mark Hurd said in his comments on the quarter.

Oracle has been touting its achievements in the cloud at a series of Oracle OpenWorld and Oracle Cloud Day events around the world. IDG News Service Editor in Chief Marc Ferranti sat down with Hurd at the New York edition of Oracle Cloud Day last week to talk about Oracle’s evolution, how it’s helping its customers move to the cloud and why it’s Exadata hardware business, tuned for its database technology, is growing.

IDG: There’s always pressure on IT decision makers to achieve greater cost efficiencies.  Meanwhile, it looks like we’re heading toward some turbulent times in business — markets have been volatile, there’s geopolitics, with trade wars and…

Has any of this affected conversations you have with your customers? Are they asking you for anything different?

You know, I would say that what’s probably different in discussions is I probably do less evangelizing or need to do less evangelizing about cloud.  There’s more discussion about the how-to.  What’s unclear is — how do I get there both economically, without double paying?  I don’t have room to pay twice.  I want to create this new world, I have to run my existing world.  How do I do it with a minimum of risk while I do it?

I think there’s a real opportunity in the services market — how do you help these customers get things done without thinking of the world the way you used to 10 years ago, where you rolled up these huge bills in these customizations and applications and all of this? Focus on emergence, focus on accelerating the go-live, so if I get the go-live faster, that double pay thing goes down significantly.

Is Cloud at Customer part of what you offer to companies that are in transition?

Cloud at Customer is part of a continuum.  If you look at some customers, depending on how heterogeneous your environment is, you can standardize it on Exadata on-premise. In Cloud at Customer, we manage it, we run it.  And then the next step is into the Oracle Public Cloud. So I think there are different choices of infrastructure approaches.

It’s interesting you mentioned Exadata because we’ve heard a lot from you about cloud, but not really much of anything on the hardware side. Are you getting away from hardware?

Exadata on-premise is growing and doing quite well.

How so?  Part of Cloud at Customer?

I think simplification.  I think there’s rebellion against complexity.  I think there’s rebellion against all of this heterogeneity.  I think moving to simpler target architectures makes a lot of sense.  Maybe Exadata isn’t moving all the way, but it’s a step in that direction.  So, if you want to run a standard version of the Oracle Database, you want to get unbelievable price performance and unbelievable support, going to Exadata makes a lot of sense.  The next step would be go to Exadata Cloud at Customer.  It’s the same thing, but now patch it and we now run it basically for you.

This morning you mentioned that if you took your applications customers, and you moved them to the cloud, your revenue from that would go from $12 billion to $23 billion.  And another point you were saying was customers want to run the cloud because it’s less expensive. How is it that customers can be paying less and you can be making more?

All those statements — whoever made them was right!  When you take a support dollar, on-premise support, and you pay me a dollar, and you’re now doing that for financials, let’s say E-Business Suite, and you went to Cloud Financials, you’re now instead of paying me a dollar, you’re probably going to pay me three dollars, you may even pay me four dollars.  It depends on the complexity and users and all that.  But then you don’t have any cost for a server or for storage or for a data center or for people or for a database or for middleware.  All that now is on me.  So if your costs go down, my revenue goes up.

For the feature sets, which is what we would build into the product, the answer is assuredly yes.  The only place we’ve got some work to do is still in the manufacturing part of the ERP.  I think you would want to ask that question a little differently, because almost all of these on-premise things were customized.  So depending on the level of customization, you could possibly find somebody who’s built five-six features that we may not have in the cloud.  But the general answer, I would say, [is] yes.

Well, they really work together.  Most all the Gen 1 clouds have customer data and a control plane on the same server.  So if you were to hack into customer data, you could actually get access to the control plane.  Our Gen 2 cloud completely segregates the two.  So security-wise, it’s a materially more secure environment.  We continue to completely redo the networking in the Gen 2 cloud, so performance is extreme in the Gen 2 cloud from a network perspective.  The autonomous database now allows us to give customers self-patching or automatic patching, AI, machine-learning patching.  Same thing with optimization and tuning.  So you now get automatic tuning, automatic patching, you get segregation of control plane and data, you get expanded networking.  So it’s really all of those features combined that bring together Gen 2 cloud and autonomous database.

So here’s a touchy topic — vendor lock-in. The feeling is you’re not really kind of going out of your way to make it really easy or really supporting vendor clouds with your products. Don’t you want to make it easy for your customers to run your products wherever they want?

You have a blockchain service, you’ve got various kind of ready-to-go applications on blockchain.  And I know you’ve got a bunch of proof-of-concept customers, but there are a lot of questions about scalability.  Do you have customers that have begun to scale up globally on your blockchain?

Blockchain is still in its infancy, to be clear.  I think there are two aspects to blockchain.  One, I think that blockchain will become a feature of supply chain apps, HR apps, etc., as we go forward.  I think you’ll also have to then look at the evolution of networks that actually carry the blockchain information across them.  And so I think there’ll be some use cases that scale, I can imagine scaling pretty quick, but let me give you an example — HR, which is secure transcripts, secure employee applications. The fact that you can now get a secure, authorized, authenticated transcript, employment application, etc., I think that will go [quickly] because it’s easy to get.  It’s no skin off anybody’s teeth to get that, right?  I also think supply chain will go relatively quickly, the idea that what I ordered is what I received.  So I can imagine those networks evolving, as well as the feature sets [going] directly into the apps.

You mentioned blockchain would be a feature of software.  Do you see that happening with machine learning and AI?

I agree with the premise that AI is a feature as opposed to an app. Do I have a bunch of people saying — hey, do you have an AI app?  No. I think what AI becomes is a feature that allows you an understanding of history.  That doesn’t make it a perfect predictor of the future.  Now, the computer will get better and better at correlations as it goes forward. I think that now AI needs human support in terms of making optimal leadership decisions.  But I think assistive machine learning is undeniable in terms of its ability. The machine is going to do all the processing for you.  This is going to change the way apps work.

I talked with NetSuite founder, Evan Goldberg, some time ago, and one of the things we talked about was doing some integration between NetSuite and your other products.  The number one thing he was talking about at that time was integrating with Oracle Planning and Budgeting Cloud [PBCS]. How is the integration going with NetSuite?

I think the acquisition has been outstanding. We had relatively simple strategies when  we bought them — to increase their sales resource, to increase their R&D so they could get the product available and in more countries, to verticalize the product in more industries, and then to point to extend the portfolio with integrations to other products like PBCS.  PBCS is integrated now.  It’s been a fantastic run with NetSuite.  Right now, their revenue growth is almost double what it was when they were an independent company.

Will you be bringing some of the machine learning features into NetSuite?

Sure. You’ll see all of our analytics products integrated with NetSuite, AI, machine learning as well.  We’ll continue to bring every bit of innovation we can to that suite.