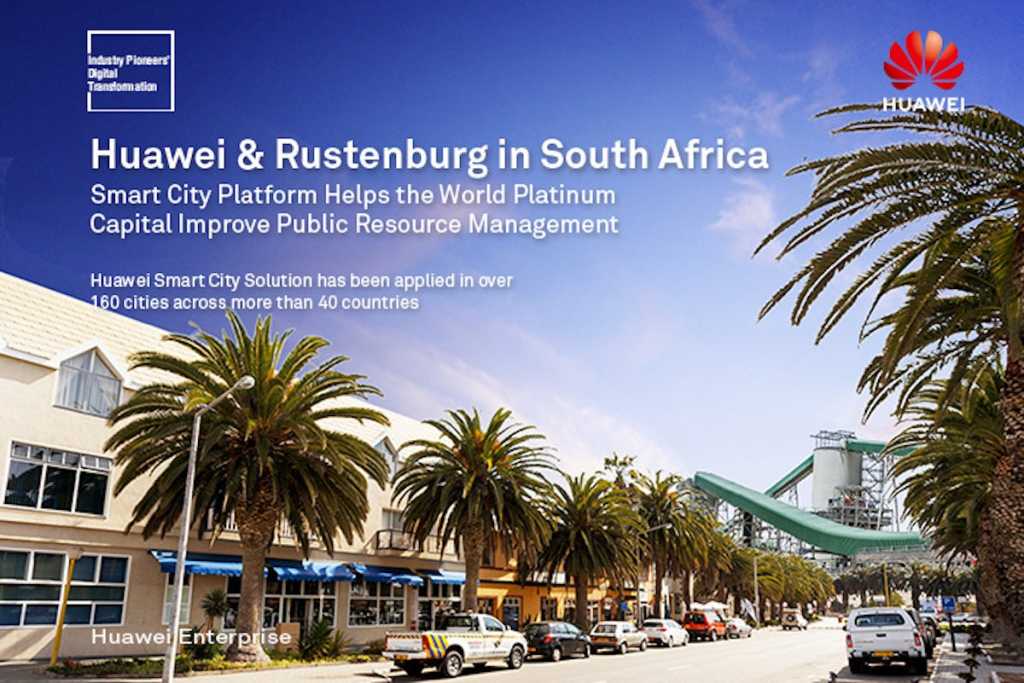 Founded in 1850, Rustenburg, South Africa is the largest and most populous city in the country’s North West province. Local tourist attractions include Sun City, the Valley of Waves, and the Rustenburg Nature Reserve.

Home to one of the two largest major platinum mines in the world, Rustenburg’s mineral deposits have led to rapid economic growth and urban expansion, making it one of the fastest growing cities in South Africa.

Platinum mining is projected to decline after 2040. To ensure the city’s long term vitality and citizens’ living quality, in 2014 the Rustenburg Local Municipality (RLM) began to formulate the Rustenburg Vision 2040, with the goal of becoming “a world-class city where all communities enjoy a high quality of life” — a city that is interconnected, energetic, healthy, green, friendly, secure, smart, prosperous, efficient, and sustainable.

The first phase is focused on addressing the city’s biggest challenges.

The number one challenge was public safety. Rustenburg’s population has increased by more than 400 percent in the past decade, and the urban proportion of the population for the greater Rustenburg area has risen sharply to over 75 percent.

This has led to a large wealth gap and a rate of high unemployment, which in turn has led to increased rates of crime. The city’s law enforcement capabilities have been limited to insufficient policing resources (such as video surveillance), and a lack of effective administrative and emergency response measures.

Public utilities like water, electricity, and transportation were difficult to manage, which led to 40 percent of Rustenburg’s water usage and 18 percent of its electricity consumption being unaccounted for. Additional risk exposures include insufficiently secured reservoirs, warehouses, and other urban assets.

The third challenge is the city’s economic dependence on a single industry.

Rustenburg is highly dependent on platinum mining, with more than 50 percent of the city’s population engaged in the industry. Platinum price fluctuations have an immediate and direct impact on the local economy, which in turn highlights the limited social capital and digital technologies which could be used to promote the innovation.

Electronic Connect is a mobile payments service that was founded by Telkom SA in 2006 in cooperation with bank technology experts.

“It is in our DNA to build and operate smart cities,” Electronic Connect CEO Zamo Mthiyane said. “We hope to work with partners like Huawei to make Rustenburg a smart city through continuous innovation and feasible solutions.”

In addition, Huawei cooperates with partners to build platform ecosystems that support both urban governance and innovation.

Currently, Huawei’s Smart City Solution has served more than 160 cities in more than 40 countries, which has provided extensive Smart City construction experience that is being leveraged to help Rustenburg.

Huawei collaborated with Electronic Connect to discuss Smart Rustenburg’s top-layer design and business model, as well as its feasibility and sustainability. The overall architecture of Smart Rustenburg includes:

The unified big data platform summarizes and analyzes all data in real time during business operation, improving decision-making efficiency by more than tenfold.

Rustenburg’s crime rate is expected to decrease nearly 50 percent year-over-year after project implementation. In this way, Smart Rustenburg will attract more investments and allow its citizens to live and work in peace.

Fully connected, Rustenburg will provide urban IoT innovation and Internet access services for everyone. Rustenburg’s IoT platform will connect and manage all sensor devices in the city. Based on Huawei’s eLTE-IoT and EC-IoT networks, all smart devices within the city will be connected.

A centralized billing solution connects customers to utility companies, and supports multiple payment methods, anytime and anywhere. Residents can pay water and electricity bills online, saving 90% of time, and mobile payment is used to increase the public utility payment success rate from 60% to 95 percent% or higher.

In addition to public utilities, mobile payments can be implemented in shopping malls, supermarkets, and small businesses to increase payment efficiency by 90 percent. In addition, taxi and bus fares can be paid through electronic cards. Small- and Medium-sized Enterprises (SMEs) can use online payments to promote e-commerce.

A comprehensive entrepreneurial platform has been built to connect SMEs, citizens, and governments, and additional efforts will be made to build a digital economy and innovative ecosystems in the near future.

Rustenburg’s digitalization has facilitated free Internet access in poor areas, and the creation of two companies (Ontiretse and TNF9) in related industries has provided more than 1,500 jobs.

The connectivity, productivity, and participation of Rustenburg’s citizens has been improved, and the city’s diversifying economy and increasing employment rate will stabilize its society.

Nearly 15,000 enterprise customers and 80,000 residents will be served by the early stages of the Rustenburg Smart City project. In the future, more than 600,000 citizens will enjoy the benefits of a smart city and a digital economy.

Mineral resources may become exhausted, but the ‘gold mines’ of intelligence will survive as long as Rustenburg perseveres.

“Smart Rustenburg will be a demo site,” said Mthiyane. “Other cities in South Africa will quickly become smart cities by implementing similar digital platforms and technologies. In addition, all industries can benefit from the digital platform (the IoT, cloud, big data, and video surveillance). Other African cities can also take Rustenburg’s practice as an example of how to better connect municipal institutions, enterprises, and residents, for a better future.”