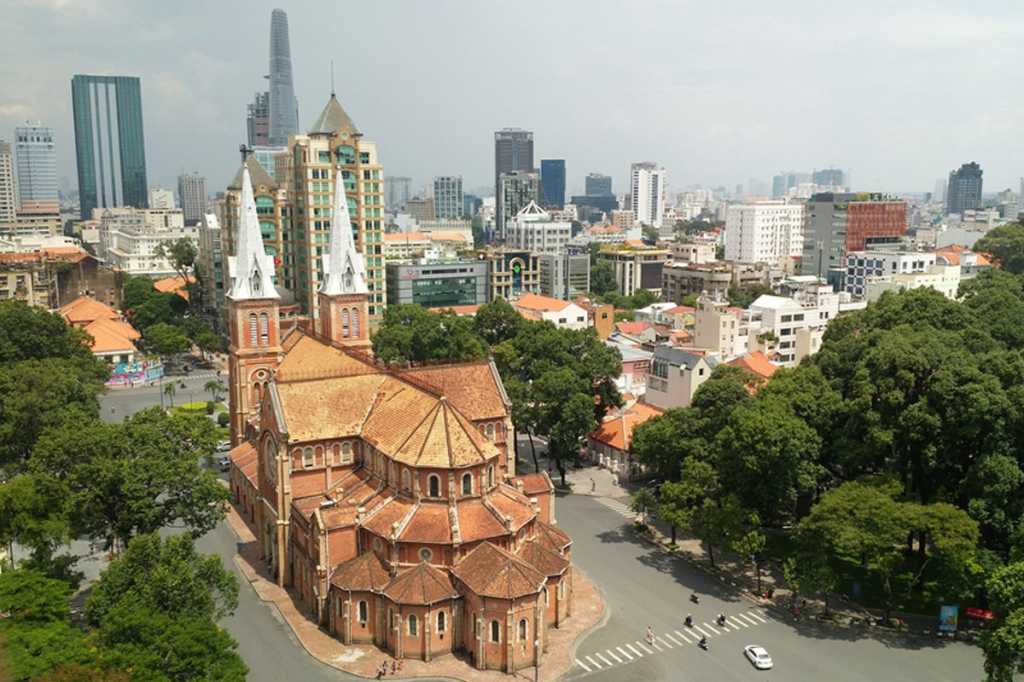 “Vietnam is blessed with immense potential for clean renewable energy development”, he told Reuters. “We wish to cooperate in research and development and transfer of advanced technologies in mining and in-depth processing of rare earth in order to create high value-added and environment-friendly products.”

The rare earths he referred to are a series of chemical elements found in the Earth’s crust that are vital to many modern technologies – including clean energy and environmental mitigation.

According to Phuc, Vietnam’s northern province of Lai Chau is home to the world’s third largest reserve of rare earths of roughly 20 million tonnes.

And yet, Vietnam’s strong economic growth – one of the strongest in the region – is fuelled by coal, the most polluting fuel source on the planet and one of the main contributors to global warming.

Forbes recently reported that in 2017 the city of Hanoi had just 38 days of clean air during the entire year, with contaminant levels four times those deemed acceptable by the World Health Organisation.

The contrast between Phuc’s words and the situation on the ground raise important questions and directly tackles the heart of the matter – is Vietnam ready for a real commitment in green technologies?

Home to luscious jungles, forests and innumerable natural beauties, Vietnam environmental decline goes back to French colonial rule in the region in the 19th century.

Hundreds of acres of jungle were destroyed to give place to factories and farming. Soil was exhausted as a result of excessive exploitation and from mining of tin, coal and zinc.

However, the most desolating effects on Vietnam’s environment in recent times are the result of the Vietnam War.

On top of the devastating human loss and the impact on generations of survivors, the ecological damage caused during the conflict still affects the country and its inhabitants to this day.

The use of Agent Orange and Napalm was responsible for the deforestation and destruction of much of Vietnam’s ecosystem.

Many effects of the Vietnam War on the environment have proved irreversible, with species of animals and vegetation greatly reduced and, in some cases, extinct.

And although today’s Vietnam environmental problems and reliance on coal are not all result of these historical events, they are nonetheless indirect product and traceable consequence of a long history of colonialism and conflict in the country.

An Energy Outlook Report from 2017 by the Danish Energy Agency shows that over the last decade, Vietnam has increased its reliance on coal.

This makes Vietnam the largest greenhouse gas emitter in ASEAN over the last ten years.

And despite this increment in pollution levels, coal consumption is soaring in the country and is an important factor in its strong economic growth.

This is a vast increase on 2017 levels, which reached 2.8 million tons in the same period.

One-third of Vietnam’s power supply is currently generated from either coal or energy imports; the other two-thirds come from hydro-energy and gas.

Due to Vietnam’s industrialisation and integration, the growth in electricity demand has been increasing at an enormous rate.

With a population of over 90 million people and an average annual GDP growth rate of 6.9%, in order to ensure sustainable growth, Vietnam has increased its energy demand by 10% during the past 10 years, and is expecting to continue to do so by another 400% over the next 20 years.

Electricity consumption accounts for the majority of the energy demand and is expected to increase at an even faster rate, by 600%, over the next 20 years.

The country has almost reached its maximum potential for hydropower production, its oil and gas supplies are running low, and as we have seen, coal is having devastating effects on both people and the environment – what are the alternatives left then?

Vietnam has plenty of room for expansion into renewables. It has the capacity to generate 500-1,000 kWh/m2 annually from wind farms and it also enjoys between 2,500 and 3,000 hours of annual sunshine.

Although  it is considered  that Vietnam has a  significant renewable energy  potential, the current development of renewable energies in Vietnam is still low compared with the actual potential.

Is Phuc’s government then doing enough?

As of April 2018, there were 245 planned renewable energy projects in Vietnam. However, only 19% had reached the construction stage, and only 8% were in operation.

These figures show that Phuc’s government could still show a stronger interest and facilitate the way for this project to come to fruition.

The volume of planned projects indicates companies are interested in transitioning to renewables, however government policy is not designed to encourage the switch.

To meet Vietnam’s economic development needs, the country has to produce an extra 25-30% of the volume of electricity in the coming years and therefore diversify its investments, particularly in the area of non-carbon based energy.

According to the national electricity development plan, the production of electricity via renewable energy should reach 5% in 2020.

In February 2011 the Hanoi development project was launched. The project consists of re-developing two villages to create a miniature town of around 180 hectares to integrate green technologies such as air-conditioning systems using renewable energy, waste recycling and rainwater collection points.

Initially, the zone aims to accommodate the 6,000 residents of the 2 villages on the outskirts of Hanoi although the number of residents could rise to 20,000 once the project is finished after 10-15 years of work.

Because electricity consumption in the commercial and industrial sectors is expected to multiply in the coming years, now is a critical moment to support large energy users in shifting to clean energy.

The Renewable Energy Buyers Alliance (REBA), a coalition of more than 100 large energy buyers helping corporations purchase 60 GW of renewable energy in the United States by 2025, launched a workgroup in Vietnam last year.

Co-led by WRI, Allotrope Partners and the US National Renewable Energy Laboratory under the Clean Energy Investment Accelerator (CEIA), the workgroup plans to collaborate with large commercial and industrial energy consumers to identify ways to lower the cost of deploying and integrating renewable energy in the country.

And in March this year the prestigious Goldman Environmental Prize for grassroots advocacy was awarded to the first Vietnamese recipient, 42-year-old clean energy champion Nguy Thi Khanh, who hopes to end Vietnam’s reliance on coal and persuade the country to take a greener approach.

For Vietnam, as for most countries in today’s greenhouse effect earth, green technology is not an option but a must if environmental disaster is to be avoided.

The question is, is Vietnam’s government willing to be a regional clean energy leader?