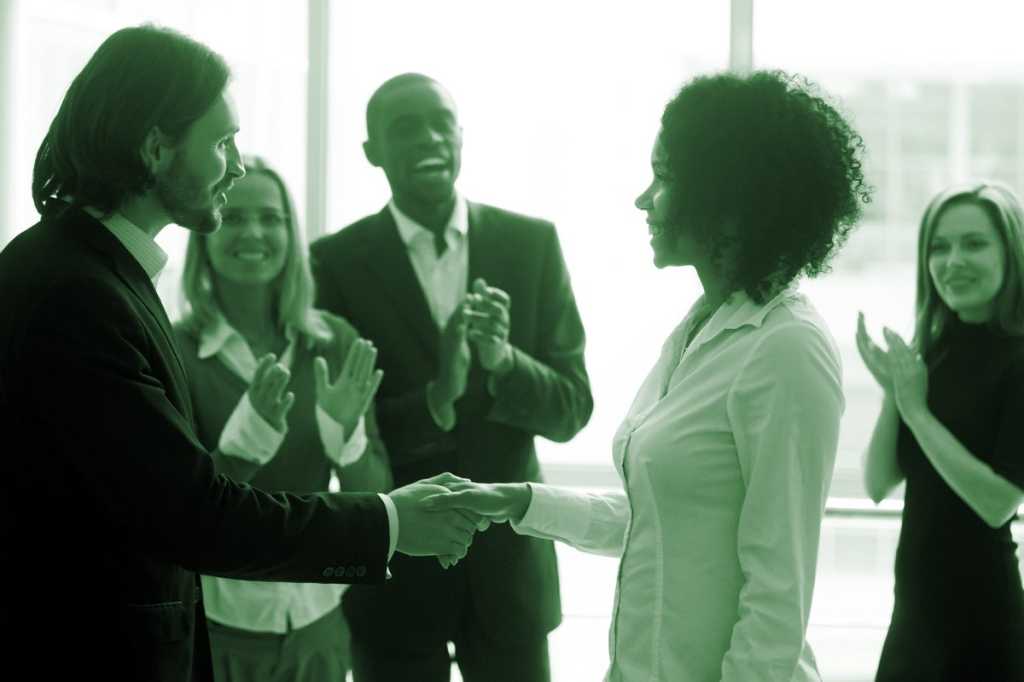 What happens when someone on your team goes the extra mile? Do you acknowledge and reward that effort? Good for you. Be warned, though, this is dangerous territory. You can do a lot of damage if you wade into these waters without the necessary skills.

“Companies should be very careful with rewards,” says Alexander Kjerulf, Chief Happiness Officer of Woohoo inc, and the author of Leading with Happiness. “They have been conclusively proven to demotivate employees.”

“A reward, is not a gift,” says Adrian Gostick,leadership consultant and coauthor of The Carrot Principle. “It’s recognition.”

If you look closely at how managers mishandle them, it’s easy to see how rewards backfire.

Gostick tells of a client, a manager of a big IT team, who thought he’d found a genius solution. Keep a drawer full of Starbucks cards. When a staffer made herculean efforts to bring a high-value client back from the brink: Starbucks card. When another cleaned the supply cabinet: Starbucks card. It didn’t matter what you did, or if you drank coffee, you got a Starbucks card. His team called him, ‘The Starbucks Guy.’

“It was meaningless,” says Gostick.

There is no doubt that recognizing employees is essential. A poll by employee recognition app maker Recognize found that 49 percent of employees quit when recognition is lacking. But handing everyone a Starbucks card is not recognition.

“Managers fear that making rewards personal will take too much time,” says Gostick. “But it doesn’t take long to find out what’s meaningful.” You have to get to know your people.

“If you must give rewards,” agrees Kjerulf. “Makes sure they are tailored to the recipient, given for something that matters, and not always the same thing.

More effective than rewards, especially rote ones like a drawer full of Starbucks cards, says Kjerulf, is praise. “I think companies should celebrate teams and employees who do great work rather than give monetary rewards or gift cards,” he says.

It’s much cheaper. And more effective. A Harvard study found that praise helps everyone to be happier at work, less stressed, and more productive. In the study, participants were asked to solve a problem. Half of the participants received an email where a coworker or friend reminded them of a time when they had done something well before getting to work. The praised half was more creative and successful at solving the problem than their ignored counterparts.

Lack of praise is demotivating and contributes to unhappiness. A study done by Woohoo inc, found that lack of praise was among the top five reasons people gave for unhappiness at work.

Rewarding with praise requires you to pay attention to your people and what they are doing, which is why it is so effective. And there are many ways to do it well. “We have a shout-out channel on Slack,” says Mary Pharris, Director of Business Development and Partnerships at Fairygodboss, a job site. “We use it to call out people when they do something awesome.”

Almost as important as the praise or gift you offer up is how you deliver it. Many experts say that recognizing an employee publicly is essential. “Gather everyone together and tell them what the employee did to earn this reward,” explains Gostick. “Maybe say something like, ‘A system went down! Roger stayed! He missed his softball game! But he got it running. He took ownership of the problem.’ This way you are not only recognizing Roger’s accomplishments, you are showing that he demonstrated ownership, one of your core values.”

Recognizing an employee publicly reinforces to everyone that doing a job well is good for everyone and that it does not go unnoticed.

That’s not to say you should never do it for someone who is shy. But be aware that they genuinely may not enjoy it.

Go ahead and geek out

What about the times, though, when someone does something unmiraculous but still deserving of some sort of thank you? If you’ve given up your drawer of Starbucks cards, what do you do now?

“Gifts are great if they’re personalized,” says Davey, author of You First: Inspire Your Team to Grow Up, Get Along, and Get Stuff Done.

This requires you to get to know the person you want to thank. “That is a big part of what makes your gift work,” says Davey. “Taking the time to get to know your team is the best recognition of all.”

Once you pay attention, you will probably get all sorts of ideas. People have interests, obsessions, hobbies and needs. If you make the effort to find those, your reward will say more than the dollar amount it cost you. It will demonstrate that you are paying attention.

Once you have identified the person and know something about him or her, “Find something that the person will geek out over…a model car, a new game peripheral, or a vintage movie poster,” suggests Davey.

“The recognition gifts of yesteryear don’t mean much [to Millennials, iGen, and GenZ],” says Gostick. For these generations, the things they care about tend to be experience driven.”

Like the geek gift, giving experiences requires specific knowledge of the person you want to recognize. Even more so here, since getting it wrong can send the wrong message.

“For one person the thing that most feels like a reward might be time off to climb a mountain or spend time with their kids,” says Gostick. “For someone ambitious, recognition might be one-on-one time with the CEO or the opportunity to take ownership of a project or idea.”

Giving the person who aspires to a seat at the table a day off might send exactly the wrong message, leaving them to wonder if they screwed up and are being sidelined. Someone struggling to create balance between their family life and work might resent being asked to do something that looks to them like more work.

Sometimes you want a gift that isn’t a big effort – or that singles out one person. Someone rallied everyone to finish an installation on a tight schedule, say, or hung in there to see a customer through a crisis. This is the job. But someone did it well. And you want to reward him, take a moment to do so publicly, reinforce your team’s core values, and build a stronger team. This isn’t something that warrants a day off or cocktail with the CEO. This is a leadership opportunity for you.

“Give an activity or gift that the person can share with their teammates,” says Davey. “If you’re recognizing great collaboration, for example, buy lunch for the person and allow them to choose the colleagues they want to take along.”

This will help build your team, give recognition to the employee that went the extra mile, and offer you a moment to shout out to the team that rocked the situation. You don’t even have to choose the gift. Letting them pick the lunch spot is part of reward.

Sometimes going the extra mile at work means your employee will have fires to put out at home. A spouse had to step up to watch the kids, prep meals and handle the school events while your employee was knocking it out of the park. The kids had to forgo time with a parent.

“If you’re recognizing someone who has gone above and beyond by putting out fires on evenings and weekends, think about a gift that person can share with their family,” offers Davey. “That way you are thanking their family for the sacrifice they have made, too.”

This might be tickets to an amusement park, zoo, water slide, or even just a family friendly restaurant. This is the sort of thing youcankeep in a drawer, as long as you are strategic about when and to whom you give it.

Warning! Don’t do this too often. A gift card doesn’t make up for keeping an employee away from their family.

Swag is the sort of gift that everyone knows has a selfish element. So, obviously, you don’t want to use it to reward someone who has just saved the company from an apocalypse. But there is nothing wrong with using corporate swag to fill the void of those dumped Starbucks cards.

“You could keep a few high-end pieces of corporate gear that you save for special recognition,” says Davey. “Not your t-shirt or stress ball stuff, but a really nice jacket or backpack.”

If you are serious about using rewards to engage employees, it’s a better plan to hold them for the person who has done something special – and make the effort to choose or do something personal and memorable. “This sort of dentist’s office treasure chest approach limits you to pretty generic gifts,” says Davey.

But as generic gifts go, “Swag hits a lot of buckets,” says Pharris. “And some people love it. And when an employee wears that sweatshirt out in public, she is also helping to build brand awareness.”

Know what a good reward is

Dan Ariely, Professor of Psychology and Behavioral Economics at Duke University and the author of several bestsellers on his research into human behavior including, Predictably Irrational, suggests that if you want to get good at employee recognition, take time to frame the parameters of what you mean by ‘good reward.’

“A good reward,” he says. “Is not tit for tat.” If someone on your team stays late to solve a crisis and you thank them by giving them a cash bonus, that isn’t a reward. It is paying them for what they did. “I did something; I got paid for it,” says Ariely. “Next time, I expect the same thing.”

Ariely, for example, gave a great deal of thought to how to reward his team at his Startup Lab. “I have a group of fantastic people I appreciate and admire. I wanted to get them something to show that I care about them as people,” he said. “Not just people who work with me. I wanted to be forward looking. I wanted it to be something that would stay in their minds.”

He asked each team member about a skill they wanted to learn and where they would go to learn it. “Then I sent them to that place to learn it. People learned yoga, meditation, to draw cartoons, to write…all kinds of things. Throughout the year, people kept discussing their trips. It was incredibly successful.”

He is not suggesting this is the reward you should give your employees. But it fulfilled all of his requirements. “It showed people that I care about them holistically and want to help them improve as people not just as people who work.”

Yes, you can still give gift cards

Gift cards are not, actually, the enemy. Mr Starbucks simply failed to use them well.

“I think an Amazon gift card is a great reward,” says Pharris. “They let people get whatever they want – or need. They can put it toward their groceries or buy a pair of sunglasses.” Just be careful that you are recognizing your employees’ efforts with them, not spitting them out like a vending machine.

Especially in a case where you are having trouble discovering a gift that suits a particular person, gift cards allow you to, at least, not get it wrong.

“You can still give simple generic things,” says Gostick. “Like movie tickets and dinner certificates. It is possible to make this easy for yourself. Intuit has hundreds of different gift cards employees can use.”

But if the gift cards are there to save you the hassle of knowing who or what you are recognizing, they will backfire.

“You have to get to know your people,” says Gostick.