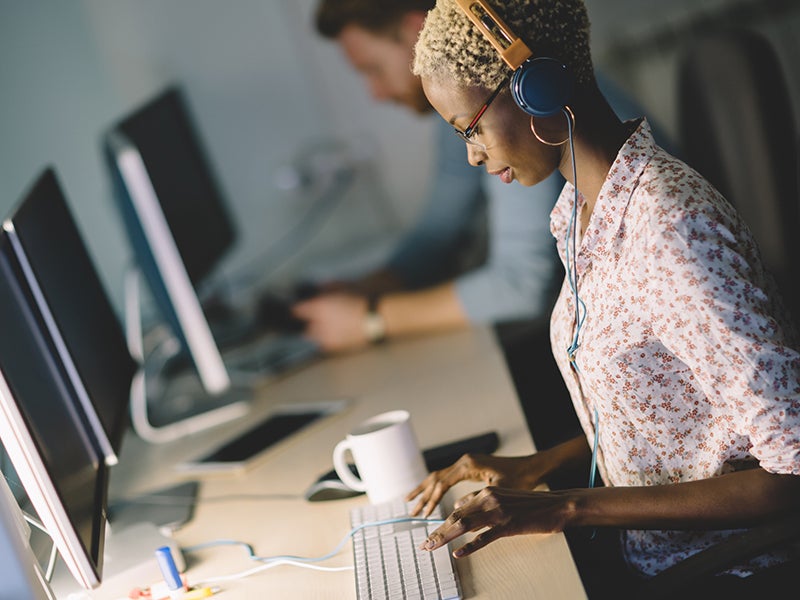 Just 5 percent of Fortune 500 companies are led by women. While the efforts to improve representation of women in leadership roles begin as early as elementary school and continue at every level of employment, the needle hasn’t moved in any significant way thus far. According to new research from online learning company D2L, that lack of progress could be because of the significant differences in the ways men and women are exposed to training at their companies.

After surveying 1,000 corporate workers across a variety of industries in February 2018, D2L’s research reveals that in general, women are less aware than men that training opportunities exist in their organizations in almost every category of learning, and less information is passed down to them from those at the top.

[ Find out how organizations are building the next generation of IT leaders. | Learn what it takes to retain top employees. | Get the latest CIO insights with our CIO Daily newsletter. ]

When it comes to sharing information about skills, knowledge and training, there’s a similar gap, according to the research. Men are more likely to believe that the organization they work for shares subject matter expertise across teams effectively (73 percent of men versus 55 percent of women). That gap does disappear when generational differences are taken into account, however. Boomers — those workers age 54 and over — actually had minimal discrepancy between how men (63 percent) and women (56 percent) believe this information is shared. But millennials (those age 18-37) had a wide perception gap between men (83 percent) and women (55 percent).

What accounts for these awareness and accessibility gaps? Cheryl Ainoa, chief operating officer of D2L, says much of the responsibility lies in how companies interact with and manage men vs. how they interact with and manage women. There are underlying differences in how men and women are socialized from birth that can manifest in ways that keep women from taking advantage of training, learning, and thus opportunities for advancement.

It’s not necessarily deliberate, either, Ainoa says. She herself experienced this in one of her previous roles.

“There are differences in how men and women interact at work, and of all people, you’d think I’d be more sensitive to it —I had a situation where I had two direct reports, one was a man and the other a woman,” Ainoa says. “We had an opportunity to move one of them up to a leadership role, and honestly, the woman had greater qualifications. So, we sat down with the executive team and looked at both of them. The man had been very vocal about ‘What’s the next step? What skills do I need to move up? Where’s the best chance for a promotion?’ while the woman had repeatedly told me, ‘I know I have a lot to learn in this role,’ ‘I am content and happy where I am, but I would consider moving up if an opportunity arose —but I’m doing well right where I am!’”

The promotion decision seemed simple: The man would get the promotion to leadership because the woman was happy and content in her current role, and the company would benefit by retaining them both. That wasn’t exactly how things turned out.

“A few weeks after that, she came into my office and quit. And I was shocked, until I thought it through some more,” Ainoa says. “What happened is what we see play out on a daily basis: Men believe they are competent and qualified if they have something like 60 or 70 percent of the necessary skills and experience. Women don’t feel qualified and competent until they’re at, like, 120 percent readiness! She was reluctant to ‘sell’ herself for this role even though she knew she was exactly as qualified as he was, and then when the opportunity came, she missed out. And we missed out because we didn’t understand the dynamics of what was happening.”

It’s tempting to blame the woman for not going after the role, but Ainoa says the fault lies more with a lack of management savvy and an inability to read between the lines. She calls it the “squeaky wheel” method of management and cites it as a major obstacle for the advancement of women in leadership roles.

“Leaders have a false sense of security when they’re only paying attention to the ‘squeaky wheel’ people —those who are very vocal about what they want, where they want to go, and what they need to get there,” Ainoa says. “Because men are most often socialized in this way, whereas women are not. Women are supposed to put themselves last on the priority list in service of everything and everyone else: their families, their partners, their kids, and at work, their teams, their colleagues. They’re not supposed to want to get that promotion or that advancement opportunity! So, when an opportunity does become available, she says, leadership is obviously going to think first of the person who’s loudest and who’s most vocal about it —and they’re going to miss out on a lot of great people who aren’t comfortable raising their hand.”

Closing the awareness gap and easing access to learning and training starts with being aware of these underlying factors and using them to your advantage, Ainoa says. There are lessons to be learned from the emphasis companies place on different personality styles that can be applied here, she says.

“It’s not that different from how we’re taught to treat introverts differently than extroverts,” Ainoa says. “They get their energy in different ways, so if you understand that, you can tailor your information and your approach so that it’s most successful.”

A personal approach is best

That means instead of simply sending a company-wide email blast with learning and training information, managers should make an effort to speak to their reports directly and individually about why and how certain training and learning opportunities would be beneficial, Ainoa says.

“When I was at Intuit, we had a number of senior women who were amazing, but while the men did a lot of public speaking at events and such, we wanted to make sure the women did, too,” Ainoa says. “We had the opportunity to participate in Grace Hopper Celebration of Women in Tech (GHC), and we were trying to figure out how to best get these women to submit speaker proposals. I emailed all the managers and said, ‘Can you please personally encourage your senior technical women to submit a proposal?’”

“And I thought, ‘What part of personally encourage did you not understand?!” she laughs. “When I talked with him later and explained why it was important to speak directly and personally, he got it, and we did end up having a number of women’s proposals accepted, including hers, and it was great —but it goes to show that you can’t just approach this in the same way you would normally.”

Ainoa adds that framing learning and development opportunities in a way that subtly acknowledges women’s socialization can also help.

“Remember that women are socialized to behave as if going after these professional achievements is somehow selfish and they’re letting others down,” she says. “So, I find greater success in framing these as, ‘You are responsible for developing these skills and contributing this particular knowledge to the team,’ instead of making it an individual achievement. And when I did that, I had a much higher participation rate and better follow through.”

While obviously the end goal is to break down those socialization barriers and encourage every person to take advantage of these opportunities for self-improvement and fulfillment, we’re not there yet. For now, leveraging those same systems to propel more women into leadership is a pretty good step, though.

As we enter into a new era of work, post-school training is more vital than ever for women to grow into the jobs that exist and be “future proof” for up-and-coming jobs and technologies. This means that on-the-job training is critical, and companies serious about diversity (especially in leadership) need to make sure men and women receive equal opportunities, Ainoa says. To ensure that workplace learning is inclusive, companies need to take steps to specifically help women with awareness and accessibility, or the diversity and inclusion needle will remain stuck.