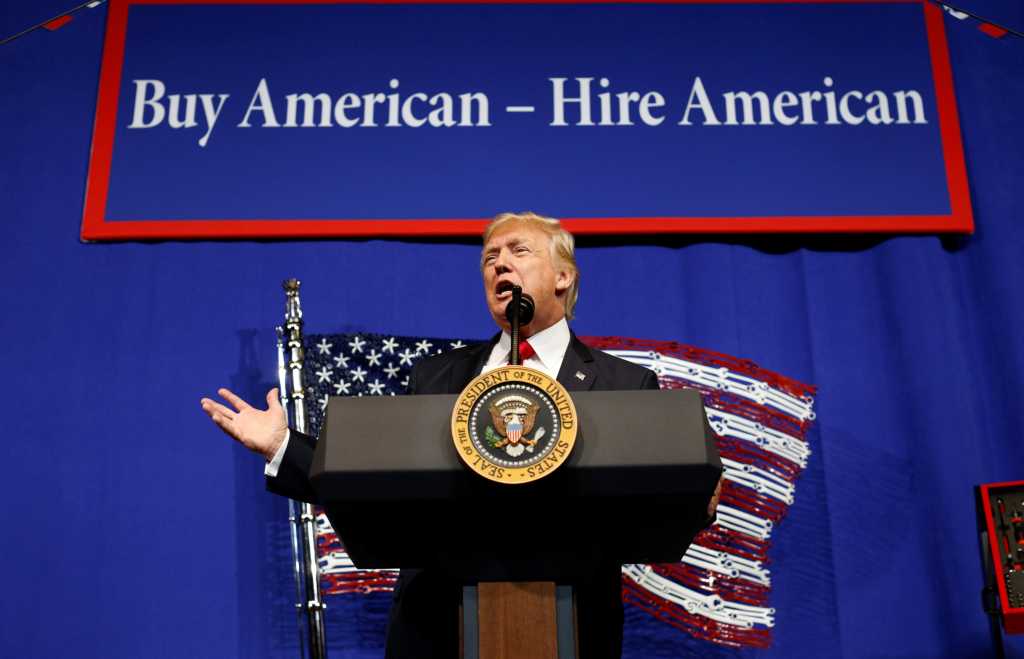 The current administration crackdowns on H-1B and L-1 visas for technology workers in foreign countries has been going on for months now.  President Trump’s ‘Hire American, Buy American’ initiative has the service provider “majors” hedging their bets and changing their service offering model.

With growing uncertainty on access and approvals of H-1B visas required to bring and now keep resources in the United States, service providers are now altering their service offerings to hedge their bets.  What is the administration doing?  How are service providers altering their practices and what effect does this have on your company’s ability to control costs or acquire and retain the talent you need to deliver?

To answer these questions, we first need to understand what is happening on both sides.  Let’s start with the government.

On April 18th, President Trump signed the “Buy American and Hire American Executive Order.”  The Executive Order further states, “It shall be the policy of the executive branch to rigorously enforce and administer the laws governing entry into the United States of workers from abroad.”  It goes on to state that the use of waivers should be minimized consistent with applicable law.

This Executive Order lays the foundation for further scrutiny of visa applications and outlines target dates (within 60 and 150 days) for agencies to complete assessments of the effectiveness of current vetting, monitoring and compliance of current laws, as well as “propose new rules and issue new guidance, to supersede or revise previous rules and guidance if appropriate, to protect the interests of United States workers in the administration of our immigration system, including through the prevention of fraud or abuse.”

Just weeks ago, on October 23, 2017, the U.S. Citizenship and Immigration Services (USCIS) issued updated policy guidance instructing its officers to apply the same level of scrutiny to both initial petitions and extension requests for certain nonimmigrant visa categories. The press release announcing this policy update summarizes the change as follows: “The previous policy instructed officers to give deference to the findings of a previously approved petition, as long as the key elements were unchanged and there was no evidence of a material error or fraud related to the prior determination. The updated policy guidance rescinds the previous policy.”

Visa renewals can no longer leverage the rigor, due diligence and initial justifications presented when first requesting a visa.  Workers requesting visa renewals must re-present and re-justify the need for the visa all over again.  What once was a formality when seeking renewal of a H-1B Visa is no longer a virtual certainty.

On November 16th, 2017, the bipartisan bill, “Protect and Grow American Jobs Act,” which raises the minimum wages for H-1B visas and proposes making master’s degrees mandatory to qualify for work with H-1B visas, was approved by the judiciary committee of the U.S. House of Representative and now goes to the full House of Representatives. If approved, it will have to also be approved by the Senate before it can be signed into law by President Trump. This bill will likely have a strong impact on Indian IT companies, though many have reportedly scaled down their dependency on H-1B visas following the election of Donald Trump.

Make no mistake, SI’s are taking notice of these policy changes and watching the administration’s actions very closely.  Many large SI’s are already altering their offerings to hedge their bets on commitments to H-1B “landed resources” and altering their financial offerings as well.  Two major players, Accenture and Deloitte, are visibly changing their practices.

Will customers pay the price in the end?

The answer to this is still unclear.  What these changes do mean for companies is the days of service provider transparency into the use of H-1B visa resources may be coming to an end.  A few things companies can do to demystify these new pricing and engagement models include:

To be honest, it is unclear what further changes will be made to our H-1B system.  What is certain is that your service providers aren’t taking a wait and see attitude and companies shouldn’t either.

Greg Hall is UpperEdge's Director, IT Sourcing & Commercial Advisory Practice, and is responsible for the development and delivery of IT labor strategy solutions, sourcing, negotiation, and supplier management advisory services to UpperEdge clients.

Including Greg’s first few years at Heller Financial, Greg has 14+ years of IT experience. Prior to Heller Financial, Greg spent 6 years at United Airlines in various IT roles in management and development within flight operations, crew scheduling, cargo and IT transformation. Greg developed United’s first data warehouse for their cargo division, initiated multiple automation efforts netting over $7 million in savings and leading multiple process improvement and transformational efforts.

Greg earned his B.S. in IT Computer Management from Eastern Illinois University.

The opinions expressed in this blog are those of Greg Hall and do not necessarily represent those of IDG Communications, Inc., its parent, subsidiary or affiliated companies.