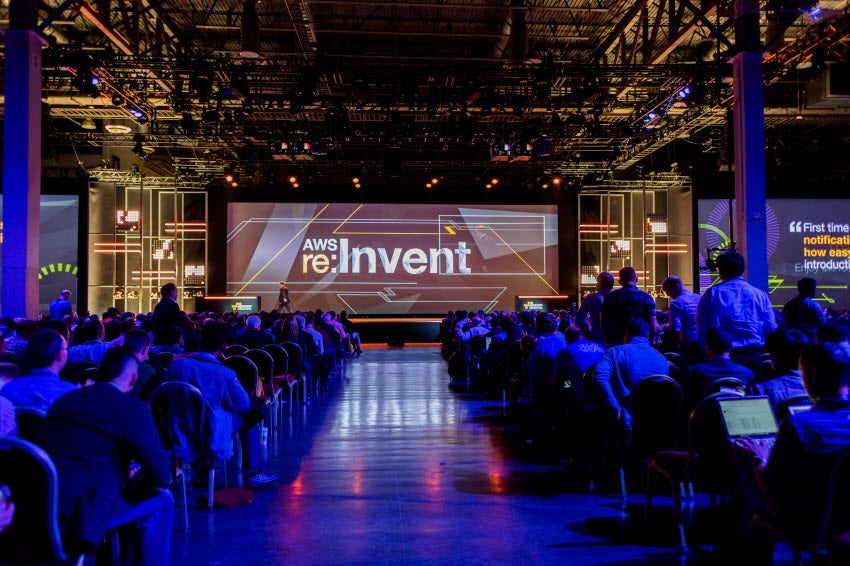 I just left the keynote of AWS re:Invent 2017. This was my first re:Invent, and I was overwhelmed with the energy and passion of the 43,000+ “AWS pilgrims” who made their way to four sites along the Las Vegas strip.

I say “pilgrims” because I don’t know how else to describe a situation where hundreds of people stand in line for a breakout session on “How to use containers at the edge” with no chance of entry. It took me a while to figure out how to navigate the conference, but I was immediately aware that I was part of something much bigger than a technology professional gathering.

The Wednesday morning keynote by CEO Andy Jassey turned out to be the centerpiece of the show for me. Andy unveiled a wide array of new services with a live band, a five-song ensemble that started with “Everything is Everything” by Lauryn Hill.

He delivered on this first theme by launching new services for everything from video ingestion to translation to easy-to-use machine learning.  The message for AWS competitors was clear – we offer our builders everything they need to serve “our” customers.  This is why this pilgrimage, even with its long lines, is made by so many highly trained and energetic technology professionals.

Clearly, it’s a great time to be a cloud transformation professional and clearly this “Everything is Everything” strategy is working for AWS and Jassey.  He reported AWS is now an $18B business at Amazon and growing at 42 percent!

Those are phenomenal numbers, and what makes it so amazing is that this crowd and AWS are clearly not satisfied with their accomplishments thus far. They want more.

AWS has been working with machine learning for many years and they know it’s still hard to understand and deploy. They clearly believe that ML will unlock the value of both databases and data streams, and so they have taken on the challenge of making it much easier to use. The AWS SageMaster tool is designed to leverage machine learning functional libraries in an easy-to-deploy framework that will “enable you to move past the difficult coding and just innovate.”

The message here is that AWS wants to “rain down” machine learning solutions via its partner network on the myriad of data driven opportunities AWS sees in its 100k+ customer databases.  Machine learning is going to be a key to unlocking value from the data streams already generated by digital business but will become even more valuable as data streams from the machines and things of the IoT edge begin to grow.

This lead us to the final tune of Jassey’s talk and, for me, it summed up the AWS strategy to continue its unbelievable growth.  The late, great Tom Petty’s “The Waiting” introduced AWS IoT. AWS’s patience for IoT developers to deliver on the promise of billions of things streaming data into the AWS ecosystem and consuming its many services is at an end.  AWS isn’t happy with “the waiting,” so they are attacking the edge.  They enumerated five challenges they are addressing:

AWS sees these five “frontiers” as the barriers to growth for their cloud business, and so they are applying their deep investment engine to knocking them down.

I was excited about the help that AWS is bringing to the IoT space from their cloud perspective.  AWS IoT Device Defender, for example, is a great addition to the security framework as an objective, data driven monitor of security implementations.  A key part to the security framework is adapting to changes and threats.  Having an upstream watch dog to identify device or system behavior changes is a valuable addition to the framework that enables quick and effective over-the-air (OTA) responses and adaptations.

The analytics engine and AWS SageMaster machine learning tools will help customers more quickly unlock value from the data devices generate and thus accelerate deployment and adoption of edge devices.  Andy spoke somewhat longingly of the pending wave of billions of edge devices streaming data to the cloud.  As a manufacturer of devices and lower stack solutions we welcome these on point offerings to both add value and reduce the complexity of connecting to the cloud.

But the announcement that really caught my attention in this part of the montage was the AWS FreeRTOS offering.  The focus in the keynote was enabling small device MCUs, which are more than 40 times more prolific than the CPUs with which AWS is more familiar, to connect to the cloud.  Again, more connections to the cloud grows AWS’s cloud service business.

But an RTOS on a connected endpoint does more than just allow it to connect.  It also enables closing the loop – automated control.  But by combining automated control with the machine learning tools of the cloud, FreeRTOS could unlock not just machine learning at the edge but automated learning – artificial intelligence.  Closed-loop edge devices that can safely run their own experiments can learn at their speed and constantly optimize operational performance.  This is true edge intelligence

I have always been an Eric Clapton and Tom Petty fan. But as I walked out of the MGM conference center I was thinking about Gene Kelly with his umbrella dancing along the sidewalk. If we can really “rain down” machine learning combined with modular computing, connectivity, and closed-loop controls in a secure framework at the edge – we won’t be “waiting” for IoT success anymore.

We will be “Singing in the Rain.”