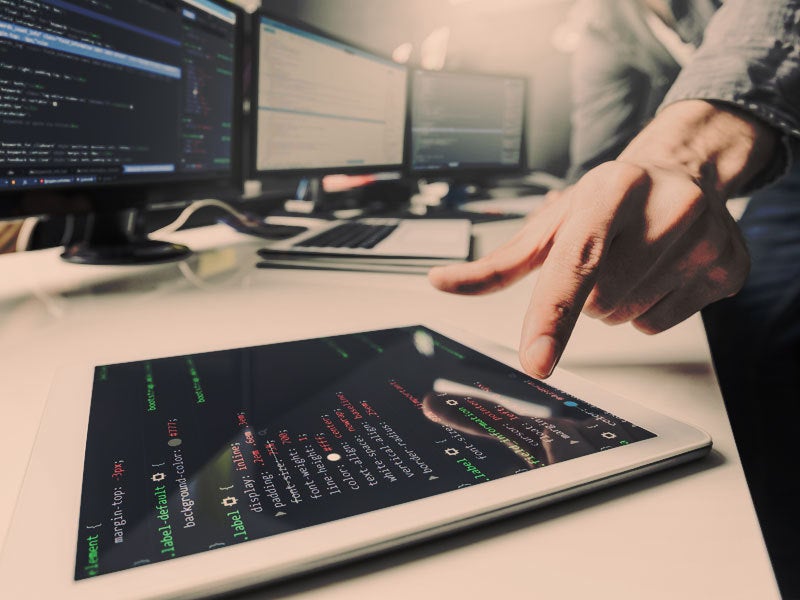 Coding has never been a particularly desirable or efficient exercise within enterprise organizations. Most of the executive team has little idea what developers actually do, and, truth be told, they don’t really want to be in the business of producing software in the first place.

Still, enterprise leaders have had little choice — they needed software to run their businesses, and there was a limit to what they could purchase off-the-shelf. As a result, there has been a constant see-saw battle in which organizations demand more and better software, while at the same time consistently try to cut the amount they have to spend on developing it.

As part of that back-and-forth process, there has been a consistent desire to significantly reduce the amount of coding that the organization required to meet its needs. Sometimes it took the form of mandates to use non-customized, commercial-off-the-shelf (COTS) software. In other cases, it led to extended experiments with rapid application development (RAD) platforms.

None of these approaches were ever sufficient, however, and the ranks of enterprise application development teams continued to swell. Then, with the rise of software as a chief source of competitive advantage and enabler of digital transformation, it became apparent that coders would remain a critical fixture of enterprise IT.

And developers breathed a collective sigh of relief.

But as software has become ever-more critical to the enterprise, the ability to deliver it more rapidly and to change it more dynamically has become essential. Ironically, this has led organizations to once again examine ways to improve efficiency and reduce the time and resources spent on coding.

Today, that comes in the form of a new breed of so-called low-code application development platforms. But do these platforms run counter to the DevOps movement, which organizations also adopted to solve the same problem? And will these new platforms finally be sufficient to eliminate coding in the enterprise?

As DevOps has taken root in enterprise organizations, it has acquired a dogmatic nature. In this mythology, DevOps has become synonymous with hand-coding and automation-fueled deployment — which are, therefore, according to the myth, the only pathways to digital transformation.

This ‘truth’ would seem to leave no place for low-code development platforms. This view, however, misrepresents the true nature of DevOps. At its core, DevOps is a philosophical approach that brings teams together with a single-minded focus on developing, deploying, and supporting applications at velocity.

Consequently, the real question becomes, what is the fastest and most efficient way of achieving that goal?

Organizations are increasingly finding that DevOps and low-code platforms are not, in fact, at odds with each other. They are realizing that low-code platforms can be an essential part of the DevOps approach by enabling faster development and deployment in a more controlled environment.

Sensing an opportunity, the low-code market segment is responding. For instance, OutSystems recently announced a series of integrations and improvements aimed squarely at connecting their low-code platform to both the DevOps and CI/CD movements. Other low-code players, such as Appian and Mendix, are also addressing the same need.

The writing is on the wall: low-code and DevOps are coming together — although thus far, it’s admittedly in the vendors’ handwriting. The question will be whether these modern low-code platforms can overcome the deficiencies of their technical forebearers and finally deliver environments capable of meeting enterprise needs at scale.

Will low-code break the cycle?

Whether or not these new low-code platforms will suffer the same fate as their predecessors weighs heavily on IT executives. The stakes are getting too high for a misstep, but the upside they promise is enticing.

Thankfully for enterprise executives, there is growing evidence that low-code is up to the challenge.

Tensoft, a provider of commercial end-to-end applications for the semiconductor, high tech, and software industries, is in the process of moving away from hand-coding their suite in .Net to using OutSystems as their primary development platform.

“This is really about adding more value for our customers, more quickly,” explained William White, the company’s CTO. “We asked, ‘how much do we want to spend worrying about the technology instead of just giving our developers a tool that has it all built in?’”

White further explained that they realized that it wasn’t their ability to code that created their unique value — it was their deep understanding of the market, their algorithms and their proprietary business logic that provided the competitive value.

As enterprise organizations recognize that their competitive value comes from their proprietary algorithms and business logic — and not from their code — the potential and promise of these new low-code platforms become clear.

“Why is the low-code space not bigger? Why aren’t people jumping in as fast as possible?” asked Tom Smith, Sr. Application Developer with Kent State University. While Smith is wary of the hyperbole and hype, he believes that we are about to see a major shift in the way enterprises develop applications — but only if vendors hone their message and enterprise organizations seize what he calls their “once in a lifetime opportunity” to get their platform right.

So is hand-coding going to the go the way of punchcards in the enterprise? In a word: yes.

But this transition won’t happen overnight and it won’t be universal. Tensoft, for instance, hand-codes what OutSystems calls ‘extensions’ to package up business logic into compiled code and embed it in the platform when they need something that it doesn’t natively support.

At the same time, however, as the low-code platforms become more sophisticated, there are fewer and fewer use cases in which organizations must hand-code anything.

This turn-of-events, however, does not portend doom for enterprise developers. The act of developing applications will remain essential and become more critical than ever. The nature of development, however, is changing. Developers, and the organizations who employ them, need to get in front of this change and adjust their organizations and skill sets accordingly.

As is true in nearly all aspects of digital transformation, those who adapt first and fastest will win.

[Disclosure: As of the time of writing, OutSystems and Appian are Intellyx customers.]