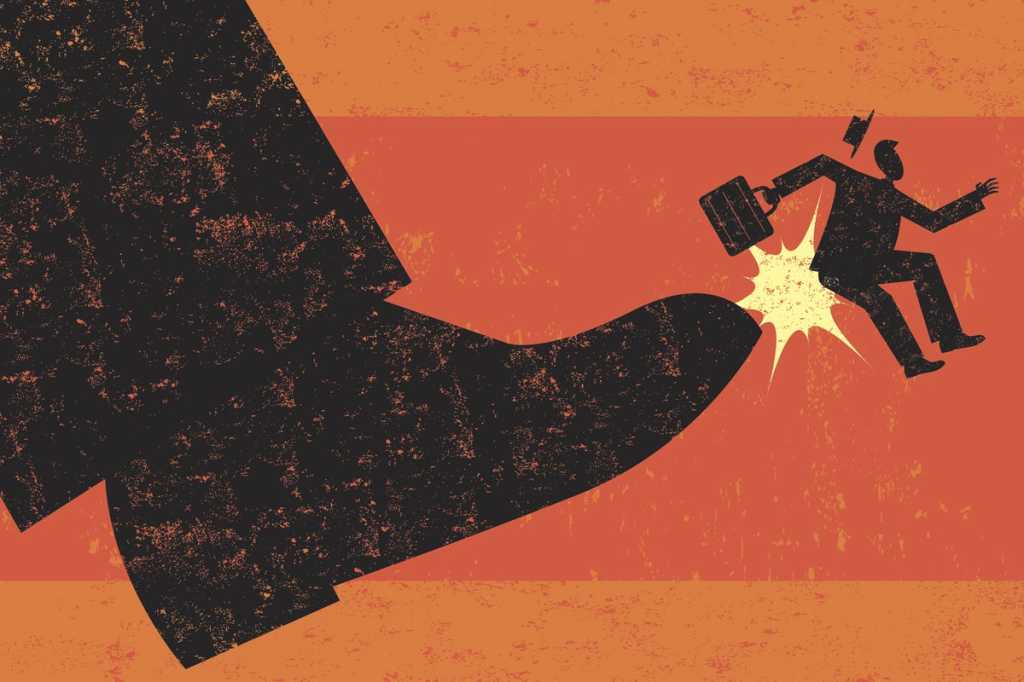 A poster of Lord Alan Sugar just appeared on the wall of a CIO I know. As it does every year, in fact.

Lord Sugar is the central figure in the UK’s version of TV show “The Apprentice.” Of course, had my CIO friend worked in the U.S., then it may have been a poster of Donald Trump on that wall. In Ireland, it might have been Bill Cullen, in Brazil Roberto Justus…but the slogan on the poster would have been the same … “You’re fired!” (OK, Roberto’s would read ‘Você está demitido!’ but you get the picture).

Lord Sugar, like his global counterparts, is a very successful, (some would say) inspirational businessman but that is not the reason for the poster per se, nor is it that Lord Sugar’s fortune was largely amassed in the tech industry which would be an obvious connection between him and my CIO friend, Max. It’s the words on the poster that inspires him every January.

The turn of each new year is a time when Max, fires…himself. And he does it in two ways that fascinate me.

Each January he imagines that he has been fired from his gig and is out of work, I mean he actually clears his desk and carries stuff out in a cardboard box! Then, he visualises seeing an advertisement for his job, he pictures himself applying and being invited for an interview. Finally, he envisages what he would say at that interview.

Now, Max chooses January to do this because the Christmas and New Year holiday allows him enough distance from his job that he is able to take himself out of his role, but I reckon this is something that could be done at any time of the year – after a weekend or a holiday or vacation. If you are really imaginative you could probably even do it over a lunch break.

If you do it properly, Max believes that it can have a profound impact on your performance. You have to be honest, answer those questions above candidly. Sometimes the thing that needs to change is YOU, you have face harsh self-truths and that can be painful – who isn’t at ease challenging someone else’s behaviour or thinking? Taking a deep breath and a step back to form a critical analysis of our own can be a wholly different prospect!

However, the more constructively you approach this, the greater the benefit.

Max says he emerges from the exercise reinvigorated and with a clear plan for the year ahead.

The second way Max fires himself is almost a natural by-product of the first. He fires himself from as many individual commitments and responsibilities as possible.

When he first started to do this exercise a few years ago he began to realise that there were huge chunks of his “to do” list that he just didn’t need “to do”. As a CIO he was meant to be a leader but there were times when he was more of a manager. For instance, there were tasks that he had not let go of, either because he didn’t trust his team enough to delegate them or (being more honest) he just really used to enjoy doing these things back in the day when he was a Project Manager.

That second point is perhaps the most interesting. The problem Max found is that he had come to identify with the things that he had become super proficient at, then as he got rewarded financially and emotionally within the business for doing these things, the harder it became to separate from himself from them.

He makes a list of the things that he REALLY loves doing, the things he would derive the most instant satisfaction from and he delegates those tasks.

This leaves time free to tackle the really gritty issues – the ones that are the difference between success and EVEN greater success. Do you have issues like this? Issues that, if tackled, would have a massive positive impact but you just don’t get around to them because of all the other stuff you have to do.

Letting go of something that seemingly gives you a sense of value is really hard and takes incredible self-awareness. Stepping out of these safety zones and stepping into the unknown, into totally new territories, tackling things that actually … you may not be as good at … that takes bravery! Here’s the thing though, what Max found is that the satisfaction you get from conquering these tougher challenges is massively greater than the instant, ephemeral gratification of completing a task you could do with your eyes closed.

It was hard at first and not just for Max.

Project Managers had come to depend on Max, they were used to him either taking the reins altogether or at least being hands on enough to make operational level decisions. Some of them felt withdrawal symptoms. Over time though, his teams grew in confidence. They realised that decisions they may have waited for Max to make, they could make themselves, incrementally speeding up the project process as a consequence.

As individuals in the team became more self-confident something else interesting happened. They started to fire themselves too!

One by one they would come to Max and suggest that something that they or a colleague were working on could be better serviced by an outsourced provider and they backed it up by having taken the time to source a specific solution from the Project Management as a Service market or, more often, we’d have had a call asking for advice.

In conclusion, all of this takes great self-awareness and buckets of self-confidence. Letting go IS hard but the rewards are immense. Joshua Reeves, the CEO of Gusto, is perhaps the planet’s best exponent of this. Reeves told The Wall Street Journal, “Wearing five different hats is not going to scale very quickly.” He is right.

Reeves told Quora that you should make time for introspection. “It’s incredibly easy to get caught up in the day-to-day routine and have life simply pass by,” he says, “Choosing how to spend your time requires introspection – a time to think about what’s working and not working, what we like and don’t like, and then change how we spend our time.”

“In school, there’s a semester or quarter system that catalyses this introspection. At the end of each semester, you need to think about which classes you liked or didn’t like, because that informs which classes you choose next. In life, there are no quarters or semesters unless you create them. This time for introspection can be weekly (i.e. by going to a favourite park every Sunday), quarterly, or even annually. Use whatever cycle makes sense for you. The main thing is having a structured, deliberate time where you take a step back and think about how you’re spending your time.”

It’s becoming increasingly important for leaders to “fire” themselves from as many of their responsibilities as they can. In an IT project team’s formative stages, it’s not unreasonable to expect a CIO to make or review every decision, write every job or role description, interview every candidate, negotiate every contract and while you’re at it, put the kettle on! As IT projects become more complex and IT and business strategies become more and more aligned, doing all these those things becomes, if not impossible, highly unrealistic.

In many instances though, it is difficult for leaders to let go. So, just like Max, start by letting yourself go. It’s been nice working with you.