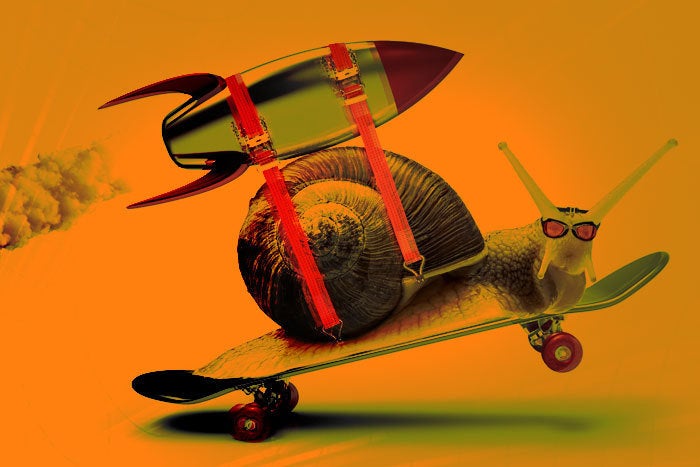 Gains in processor performance have diminished over the years. In the old days, going from a 25 MHz 486 to a 50 MHz 486 actually doubled performance. But for the last few generations of processors, performance gains have been under 10 percent, at best, for each successive generation.

At their stock clock speeds, the Kaby Lake processor is up to 7.4 percent faster on average in single-threaded tests and up to 8.88 percent faster on average in multi-threaded performance compared to Skylake. But when the testers clocked both chips at 4.0 GHz and tested through the same 11 CPU benchmarks, the Kaby Lake Core i7-7700K was 0.86 percent slower in single-threaded tests, and 0.02 percent slower in multi-threaded tests. These are numbers that basically require a benchmark to find the difference.

A review from Ars Technica confirmed it. Any performance gains in Kaby Lake are negligible and merely resulted from the clock speed ticking up.

However, Anand Srivatsa, general manager of Intel’s desktop platform group, insists that performance has not peaked, and sees other improvements in the new chip.

Intel looks at three major aspects of the core CPU. First is an improvement in broad-based instructions per clock, which it achieved with Skylake, boasting a measurable improvement over the prior generation.

Second is the addition of unique instructions that improve certain functions, like AVX2, which was designed to improve integer performance in desktop and server CPUs.

The third aspect is delivering more frequency. Kaby Lake has a minor bump in clock frequency, but it can be severely overclocked. One test pushed the chip, which runs at 4.2 GHz, to a remarkable 7 GHz.

Running out of steam?

This isn’t to say that Intel doesn’t see the writing on the wall. Amid several years of declining PC sales, and with no signs of a turnaround, Intel acknowledged the changing tides at its recent Analyst Day, where CEO Brian Krzanich and other top executives discussed the company’s direction with Wall Street analysts. They indicated that by 2021, Intel expects its PC business to generate about $30 billion, while the data center will be a $65 billion business, making it rather clear that the company is shifting its efforts to Xeon. Up to now, CPU development has started with the desktop PC market, and then Xeons followed using the new PC core. That order seems likely to be reversed soon.

Others, however, think the x86 architecture, after almost 40 years of use, might be running out of steam.

“With limits of process technologies and mature architectures, unless you re-architect from the ground up, you are not going to get more performance out of it,” says Jim McGregor, principal analyst with Tirias Research, a semiconductor analysis firm. “[There] are limits to improvements in process technology and adding new instructions. We’ve seen single-digit improvements for the last few generations now.”

The x86 has been stagnant for quite a while for two reasons, says Jim Culver, president and owner of the CPUShack Museum, a semiconductor historical site. He points to the absence of serious competition, given that AMD had essentially been a non-entity for close to a decade after shaking things up in 2003 with its 64-bit and dual-core CPUs. (AMD might be back in the game with its forthcoming Ryzen CPU, which some industry observers believe is highly competitive.)

“In the past, software would drive hardware,” he says. “Software developers would always say, ‘If we could have this we could do much better.’ But software is not so constrained by the hardware so much. You can do more, but not so limited as you used to be.” The only real software to challenge the limits of hardware is virtual reality, he notes.

Does IT need the speed?

The lack of speed may be an issue to gamers, Photoshop editors and CAD designers, but does it really matter to an office worker using Office 365 and Salesforce.com? Intel’s Srivatsa says there are innovations coming in other areas that are of value to the office worker, starting with low-power CPUs.

“A lot of business users still buy desktops for performance but they care about TCO (total cost of ownership),” he says. “We’ve got a robust 35 and 65 watt line showing up in many PCs from top OEMs, with small systems that offer TCO from power consumption and free up space, which can be a cost on the company.”

Intel is also working around vPro, its silicon-based security platform, to limit vulnerabilities, as well as Intel Authenticate technology to reduce exposure to hacking.

“These are platform enhancements very specific to IT decision makers to make PCs more manageable and focus around security and securing the platform,” Srivatsa says.

Culver concedes that a faster CPU is not a necessary feature for an Office 365 user at the moment.

“You need redundancy in connecting to the cloud,” he says. “You shift from computing power to networking power. How fast can I connect to the cloud? That’s your biggest issue these days. When your connection goes down, how do you deal with that?”

A shift to artificial intelligence

McGregor thinks that intelligent agents, rather than the PC, are the center of innovation.

“Going forward, there will be more productivity devices like assistants on your desk, and when we get to new architectures, we will see intelligent devices come all around us,” he says.

He notes that since 2015, Intel has acquired five companies involved in deep learning and artificial intelligence.

“I think they realized they were behind and they are trying to jump start that by bringing it in house. Intel definitely gets it,” McGregor says.

But Intel is still focused on the PC. It is looking at improving overall PC performance beyond just the CPU. “We are going to address all areas of a system that bottleneck performance. For generic use, these things are technically conflated. The PC feels slow, but the problem is in the storage subsystem not the CPU,” Srivatsa says.

“When we look at it we look at the desktop from a total platform perspective,” he adds. “We have made investments in memory side, with 3D Crosspoint, we’ve accelerated SSD performance and performance for people who use a hard drive. There’s a ton of opportunity to improve performance of a disk drive. We do have ingredients to offer there.”