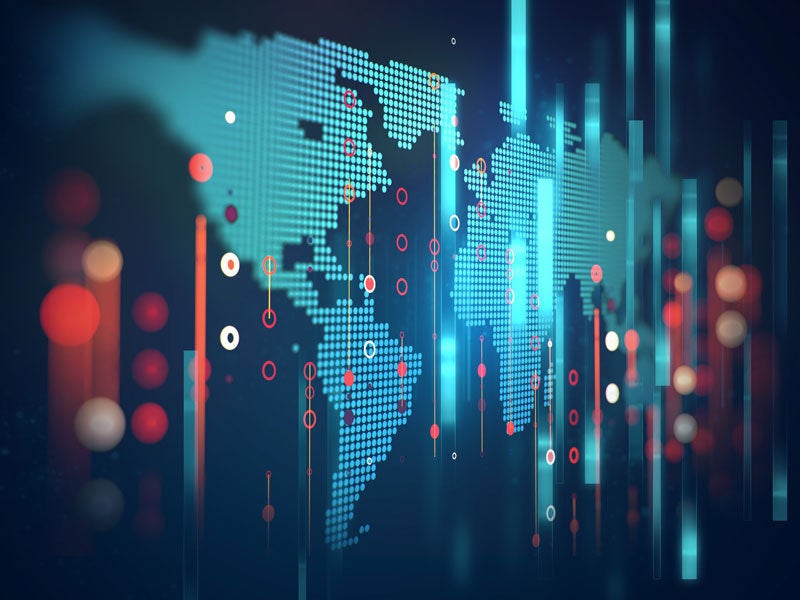 The move represented a calculated risk that provided EAFIT with massive computing capacity, as well as increased interest from global researchers and private enterprise. It allowed Purdue’s ITaP, in turn, to expand its focus and problem-solving abilities across continental boundaries. And, to this day, the campuses’ partnership provides a dispatch from the academic frontiers of digital transformation, reflecting the need to innovate, the criticality of partnerships and the empirical benefits of testing the untried.

Purdue University is renowned in the supercomputing arena.

“ITaP has built and operated nine high-performance computing systems for faculty researchers in as many years, most rated among the world’s ‘TOP500’ supercomputers,” McCartney shares.

“We did a lot of research when deciding where to sell our hardware and help establish a computing center,” he continues. “We needed a university with the capacity to build and support a high-performance computing (HPC) center. When EAFIT approached us, we assessed their willingness to allocate funding, facilities and people to the project, an endeavor they had little to no familiarity with.”

Universidad EAFIT, a prestigious private campus of some 12,000 students in Medellín, fit the bill. Founded in 1960, EAFIT’s Spanish motto Inspira, Crea, Transforma (Inspire, Create, Transform) is reflective of its own academic aspirations towards the massive time savings and research applications of HPC. EAFIT’s move was a calculated gamble, but in its aftermath Rector Juan Luis Mejía Arango said it was the best “irresponsible” decision he ever made.

In 2012, McCartney and ITaP agreed to sell EAFIT components from its retiring Steele cluster and to assist the Colombian university in implementing Purdue’s Community Cluster Program “condo” model for providing high-performance computing resources. In the Purdue model, HPC systems are run centrally rather than by individual researchers and labs, and they are used by a variety of faculty and other staff. The model, McCartney says, offers researchers access to a larger, more powerful system than any of them could afford individually through economies of scale.

Built on the Steele cluster’s still-powerful hardware foundations, Apolo was named for the Greek god Apollo, associated with truth and the sun, as well as NASA’s Apollo 11 mission, led by Commander Neil A. Armstrong, Purdue class of 1955.

“Selling a supercomputer to a Colombian university that had never owned one sounded like a potentially disastrous deal,” McCartney acknowledges. “The machine could have easily languished in storage, souring the potential for any future arrangements. Anybody can buy a machine, but getting people to run it and getting faculty from every discipline to want to use it, that’s what we wanted to impart.”

What kept ITaP motivated, McCartney explains, was its commitment to a simple yet enduring principle: Put people first. He felt enormous confidence in ITaP’s ability to get things done and to partner effectively with a new player on the global supercomputing scene. And his frequent communication with Rector Juan Luis Mejía Arango helped expedite further exciting collaborations.

Stretching the IT organization through strategic partnership

“Purdue research computing staff members traveled to Colombia to help train and to work with EAFIT colleagues, and EAFIT students participated in Purdue’s Summer Undergraduate Research Fellow (SURF) program, working with a variety of supercomputing experts at Purdue,” McCartney says. “EAFIT and Purdue even sent joint teams to student supercomputing competitions in New Orleans and Frankfurt, Germany. Some of the Colombian students on the teams have become key staff members at [EAFIT’s] Apolo center, which, in turn, is training the next generation of Colombia’s high-performance computing experts.”

ITaP staff were compelled to improvise to a degree, but the returns on their efforts were evident almost immediately. Purdue HPC analyst Stephen Lien Harrell, for example, traveled to Medellín to assist the Apolo staff, which in its early days was composed mostly of students. The training program he developed, covering such topics as cluster building and science codes, was repurposed for Purdue’s own educational curriculum—and since 2014 has been employed by the Linux Clusters Institute (LCI).

“As much as they learned from us about running a scientific computing center, we learned from them in their ingenuity at solving problems,” McCartney says. “For example, what do you do when your cooling equipment malfunctions and there’s not one heating and cooling service provider in the area? Well, you call your most distinguished air flow engineering professor to assist, of course.”

Since 2012, EAFIT has realized the promised of HPC in numerous ways. The Medellín Apolo center, built from the ground up by two committed international teams, has flourished—both in terms of team capacity and research scope.

Research enabled by Apolo has ranged from earthquake science and a groundbreaking examination of the tropical disease Leishmaniasis to the most ‘green’ way of cement processing and quantum mechanics.

“Research enabled by Apolo has ranged from earthquake science and a groundbreaking examination of the tropical disease Leishmaniasis to the most ‘green’ way of cement processing and quantum mechanics, with the supercomputer speeding EAFIT researchers’ time to science, just as Purdue’s community clusters do,” McCartney reports. “In 2016, EAFIT retired the original nodes they bought and purchased their own supercomputing nodes. A little later this year, we’ll sell them another batch of nodes from another recently retired Purdue cluster, Carter.”

Additionally, the dedicated EAFIT team has blossomed from six members in 2012 to 16 full-time research computing professionals, professors and part-time students today. In 2015, Apolo helped 69 researchers from EAFIT, other universities and local industry complete their research.

In the final analysis, McCartney says, the effort compelled ITaP “to come up with solutions to problems they had never seen before—in part because they involved an untested playing field in Colombia.”

In the process of uncovering what it took to support and grow Apolo, ITaP was transformed—with new skill sets, new experiences and new confidence in its ability to execute a daunting international project. The results of EAFIT’s “irresponsible decision” have been momentous, not only for the two campuses involved, but for academic research and computing.