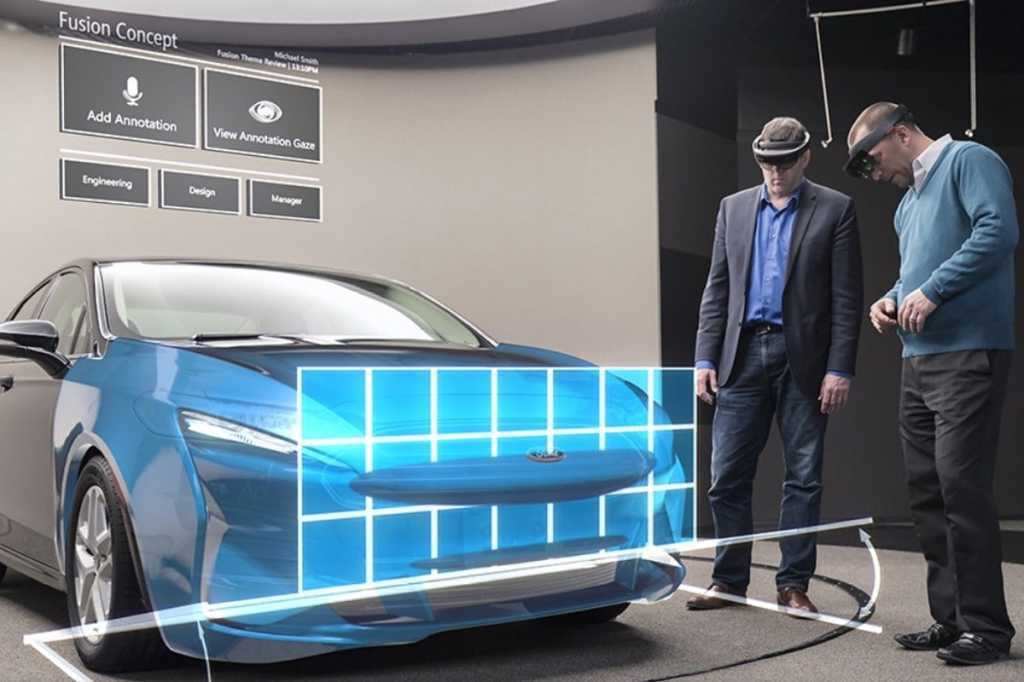 Few industries are undergoing more technology-driven change than the automotive sector, which has found itself roiled by ride-sharing services, as well as electric and self-driving cars. Another kind of digital disruption is happening at Ford Motor Co., where designers are using Microsoft’s HoloLens headset to refine the look and feel of the company’s cars in accordance with human-centric design principles.

HoloLens enables what is known as a “mixed reality” experience. Akin to virtual reality and augmented reality, mixed reality overlays contextual information atop a display. Blending physical and digital worlds, HoloLens helps employees complete their work untethered from a desk. Such flexibility, accompanied by the promise of improved operating efficiency, is a big reason why retailers, airlines and healthcare companies are embracing the technology.

Efficiency gains are exactly what Ford was looking for when it approached Microsoft in 2016 to embark on a HoloLens proof-of-concept test, ideally to improve workflow for designers who make thousands of decisions in modeling Ford’s cars, trucks and SUVs, Craig Wetzel, Ford’s design technical operations manager, tells CIO.com.

Following is an inside look at how HoloLens is helping to reshape Ford’s design process.

Ford runs five mills that churn out full-size car models in clay. After a mill pumps out a model vehicle, designers and clay modelers scrape it by hand to refine its look and feel, after which it is scanned digitally for additional scrutiny. But this process makes it hard for designers to align the physical and virtual models because they can’t see them side by side. In this process, designers, “can’t see, feel, or touch the vehicle at full scale,” Wetzel says. So when designers make changes to the clay model, they go back to the computer to see the impact, then go back to mold the clay some more. A lot of washing, rinsing and repeating ensues.

HoloLens alleviates that problem. The headset projects holographic images onto the user’s field of view, using sensors to fix those images in place as the user changes viewing angles, or as they walk around the clay model. Designers can also scroll through multiple design options for components such as grilles or side mirrors with a hand motion and display sketches onto the physical walls of the studio.

“I can walk around these holograms of my car design like the customer would walk around it, and see my digital design at full-scale,” Wetzel says. “It’s about making it more human-centric, and making sure the customer is a part of our designs.”

This affords Ford significant opportunities to change its design processes, saving time. A designer and engineer can consider how a new side mirror design affects the aesthetics as well as the customer’s opinion. Traditionally, a designer would bring in a perspective customer to weigh in on the mirror and try to remember approximately where they were standing when they said they didn’t like the look of the car. With HoloLens, the customer’s feedback is recorded in real time. “With HoloLens, I’m recording precisely where he is standing so I can replicate what he had seen before,” Wetzel says. “The critical view from where customers see an issue is key for us.”

Design processes that once rolled on for days or weeks in an iterative cycle are now completed over the course of one day. A big reason for this is the on-the-go information access and sharing HoloLens enables. If a HoloLens-strapped designer makes a change to the clay model they can get “immediate feedback” regarding the impact of their change, obviating the need to check the change on the computer, Wetzel says. Ford designers in Europe can also “thumbtack” notes about issues they are working on for U.S. designers to work on the next day. “It’s getting a 24-hour-a-day creative cycle going,” Wetzel says.

HoloLens keeps design on the down-low

HoloLens also helps Ford preserve proprietary information. Designers, engineers and product managers huddle more easily on proprietary, sensitive schematics, of which components are highly compartmentalized to preserve secrecy. Engineers often work on pieces of a vehicle without ever seeing its full model design. Using HoloLens, design and engineering teams can work on discreet parts of the vehicle without risking sensitive design leaks. “I can control who sees the data,” Wetzel says.

“It sounds obvious, but it’s something that is easy to lose sight of in pursuit of innovation and novelty,” wrote Jim Holland, Ford vice president of vehicle components and systems engineering in a post on Medium last month. “This is called design-thinking, and it’s redefining our culture and processes across our global organization to ensure we are putting people at the center of our work.”

Volvo, Lowe’s and Autodesk are among the several enterprises testing HoloLens. Gartner says 20 percent of large enterprises will have evaluated and adopted some form of immersive mixed reality, augmented reality or virtual reality technologies by 2019. By 2020, 50 percent of the world’s largest global businesses will have piloted or integrated head-mounted displays, the researcher adds.